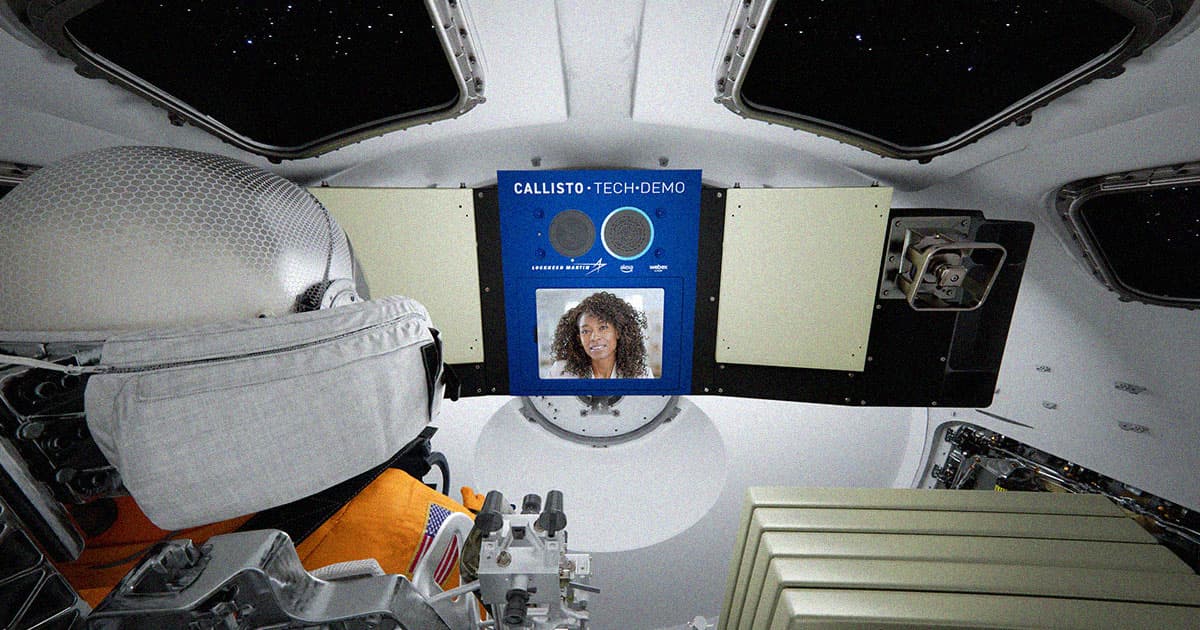 NASA Is Installing Amazon Alexa on Its Next Moon Mission, for Some Cursed Reason

In yet another odd marriage of capitalism and space travel, Lockheed Martin has announced that it will be sending an Amazon Echo as part of the upcoming Artemis 1 mission.

No, astronauts won’t be using it to check the weather or to play some lunar road trip tunes. Instead, it’ll be used to explore how commercially-available voice recognition technology could be used to help astronauts in future missions.

The project, dubbed Callisto, is a partnership between Amazon and Cisco. The idea is to demonstrate how Alexa, along with Cisco’s teleconferencing platform Webex, could be used on future missions, SpaceNews reports.

"We want to show that this type of technology can help astronauts with some of those unique human interface technologies, making their jobs simpler, safer, more efficient," Rob Chambers, Lockheed Martin’s director of commercial civil space strategy, told the site.

Alexa, Set Course for the Moon

Lockheed hopes the tech will be able to help astronauts with tasks ranging from the simple to literal rocket science.

For example, crewmembers might be able to access key pieces of data regarding flight trajectory with it, and might even be able to adjust their spacecraft controls via voice command.

"One way you’ll be able to do this with the Callisto payload is to say, ‘Alexa, what is the average temperature across all the batteries, and what is the peak temperature?’ It’ll perform that data processing for you," Chambers explained.

Artemis 1 is an uncrewed mission, so there won’t actually be anyone aboard to test out Callisto’s voice command. Instead, Chambers said there will be "virtual crew members" that will give commands to the AI.

"This is all about testing it on this flight, seeing if it’s valuable, and then we can assess how it can be used as we move forward not just on Orion but on habitats, at Gateway, rovers, and any number of other applications we’re actively looking at," he told the site.

So it seems like this is mostly a gimmick for now. If things do go well, though, we might see a future where astronauts are controlling their craft via voice command.

Hopefully, they work out the kinks until then to avoid any HAL 9000 scenarios.

READ MORE: Amazon’s Alexa to be tested on Artemis 1 [SpaceNews]

Poop Music
Genius Musicians Are Making Songs That Play When Children Yell "Poop" at Alexa
9. 3. 22
Read More
Fear Factor
Amazon Claims Rekognition Can Now Detect Fear
8. 14. 19
Read More
Sexist AIs
United Nations: Siri and Alexa Are Encouraging Misogyny
5. 23. 19
Read More
+Social+Newsletter
TopicsAbout UsContact Us
Copyright ©, Camden Media Inc All Rights Reserved. See our User Agreement, Privacy Policy and Data Use Policy. The material on this site may not be reproduced, distributed, transmitted, cached or otherwise used, except with prior written permission of Futurism. Articles may contain affiliate links which enable us to share in the revenue of any purchases made.
Fonts by Typekit and Monotype.