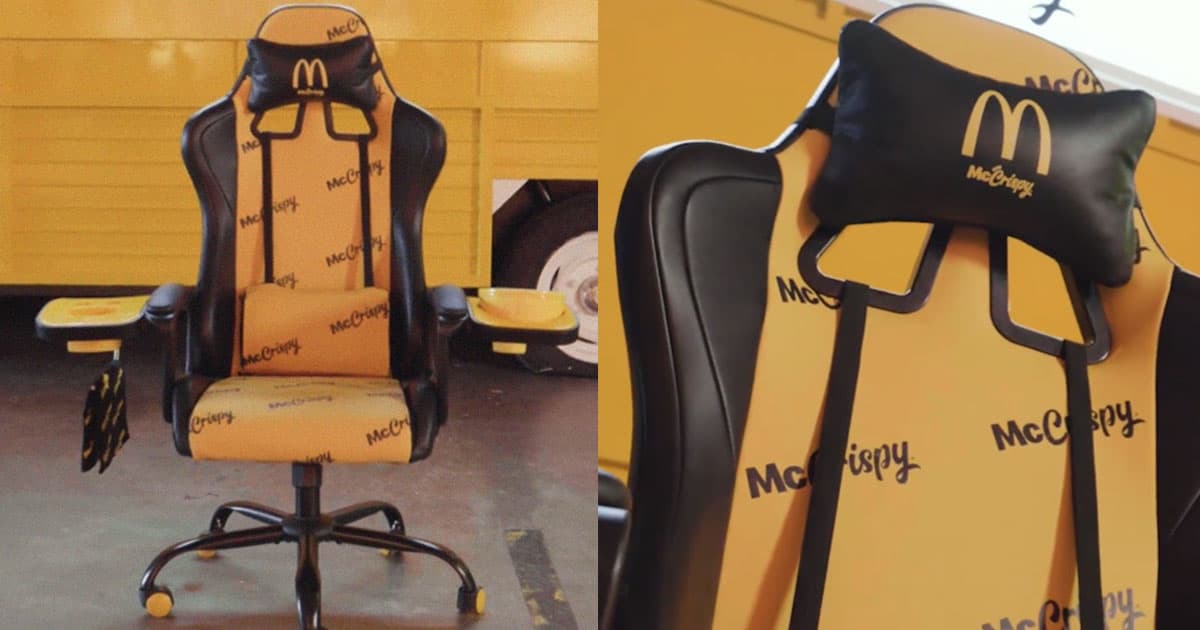 It'll keep your sandwich warm while you get your game on.

It'll keep your sandwich warm while you get your game on.

McDonald's has come up with a hideous gaming chair called the "McCrispy," which features "stain-proof leather" and even a fry holster — a wretched and seemingly ill-advised attempt to cash in on the popularity of e-sports.

The McCrispy Ultimate Gaming Chair also can hold stow your drink as well as two dips. It even features a "hot box to keep your McCrisp1y warm while gaming," according to a press release.

Yes, we wish were making this up. It's an abomination that reminds us of the Segway-like chairs featured in Pixar's "WALL-E." Sure, there's nothing wrong in indulging in some trashy fast food — but do they really have to pander this hard to a demo that sounds, frankly, horrifying?

The chair was first advertised by the chain on its official UK Facebook page on Monday.

The stain-proof leather will not only ward off greasy fingerprints and Coke spills, it'll also make sure particularly sweaty gamers don't leave a permanent imprint after a long gaming session.

In summary, the chair leaves us with one glaring question: has humanity really sunk this low? Will gamers really be lining up for this atrocity?

In case you are indeed interested, you'll have to act quick: the franchise is only giving away a single chair as part of the promotion.

Now, excuse us while we get a Clorox wipe.

More on fast food: Fast Food Is Filled With Chemicals That Disrupt Hormones

Gamer Word
Scientists Find That Gamers Are Indeed More Racist and Sexist Than Normies
Oct 27
Read More
Ice Cream Dreams
McDonald's Sued by Ice Cream Hackers for $900 Million
Mar 4
Read More
Magic: The Reckoning
Maker of "Magic" Cards Sends Cease and Desist to Project Minting Unauthorized NFTs
Feb 15
Read More
+Social+Newsletter
TopicsAbout UsContact Us
Copyright ©, Camden Media Inc All Rights Reserved. See our User Agreement, Privacy Policy and Data Use Policy. The material on this site may not be reproduced, distributed, transmitted, cached or otherwise used, except with prior written permission of Futurism. Articles may contain affiliate links which enable us to share in the revenue of any purchases made.
Fonts by Typekit and Monotype.