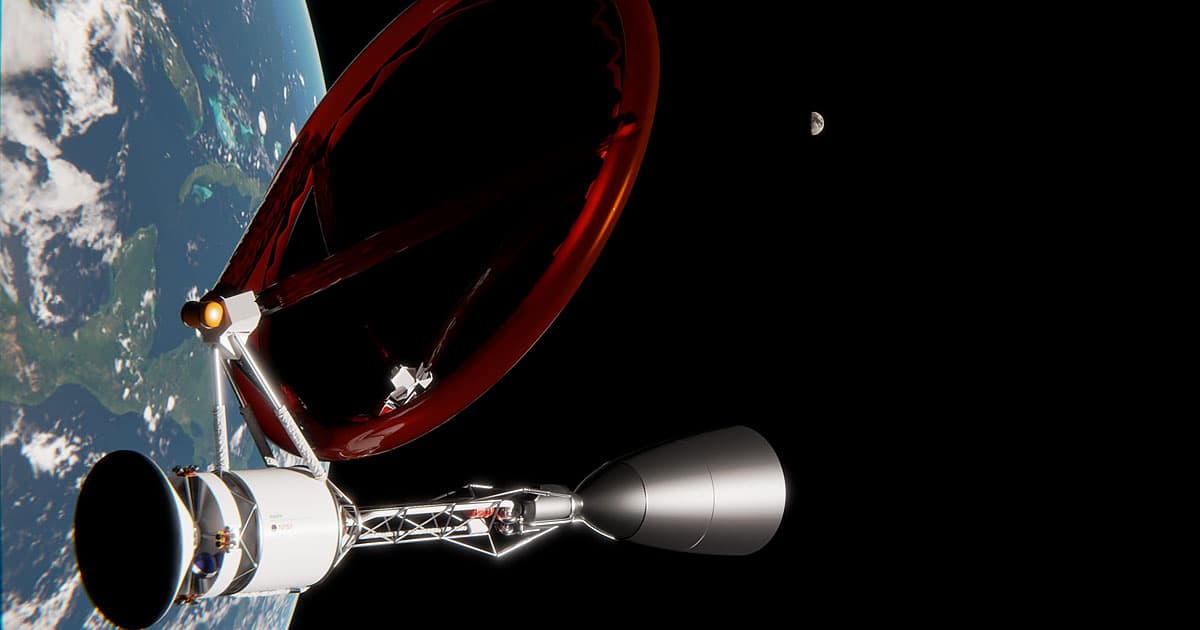 It could whip a spacecraft to Mars in just 45 days.

It could whip a spacecraft to Mars in just 45 days.

One of the biggest challenges that we need to solve to colonize Mars is how to resupply astronauts on the Red Planet quickly. To that end, a team of researchers came up with a clever plan using a laser to send a spacecraft to Mars in just 45 days — cutting the travel by months.

The team from McGill University designed a system that uses a 10-meter wide laser array on Earth to power up an orbiting spacecraft, Phys.org reports. The laser would heat hydrogen plasma in the ship until it creates enough superheated hydrogen gas to propel it to Mars. Basically, it would allow us to supply interplanetary thrusting power from down on Earth — without worrying about launching all that heavy fuel into space.

"Laser-thermal propulsion enables rapid transport missions of one ton with laser arrays the size of a volleyball court," Emmanuel Duplay, lead author of a paper and former student at McGill University's Summer Undergraduate Research in Engineering Program, told the website.

The team created the concept after NASA issued an engineering challenge to design a method of getting to Mars that could carry a 1,000 kilogram payload in no more than 45 days.

Their system, detailed in a paper in the journal Acta Astronautica, would be able to take crucial supplies and astronauts to Mars colonies in a trip that would typically take months in traditional chemically-fueled rockets.

Once it gets to Mars, it’ll use the Red Planet’s thin atmosphere to "aerobrake" — a delicate and potentially dangerous maneuver that rapidly decelerates the ship. While traditional spacecraft would use chemical propellents to stop, that requires more weight in the payload to carry the fuel. Using Mars' atmosphere circumvents that.

The design is incredibly fascinating and offers a lot of promise, but it's still very much in the conceptual stage. For now, we’ll just have to deal with pesky rockets that can potentially explode on the launch pad.

NASA's Mars Rover Concept Looks Like the Batmobile
5. 12. 17
Read More
Cubesat Death
Another Satellite Released by NASA's Artemis I Just Croaked
10:04 PM
Read More
No Shortage of Money
Tesla Short Sellers Are Suddenly Making Money
7:48 PM
Read More
+Social+Newsletter
TopicsAbout UsContact Us
Copyright ©, Camden Media Inc All Rights Reserved. See our User Agreement, Privacy Policy and Data Use Policy. The material on this site may not be reproduced, distributed, transmitted, cached or otherwise used, except with prior written permission of Futurism. Articles may contain affiliate links which enable us to share in the revenue of any purchases made.
Fonts by Typekit and Monotype.