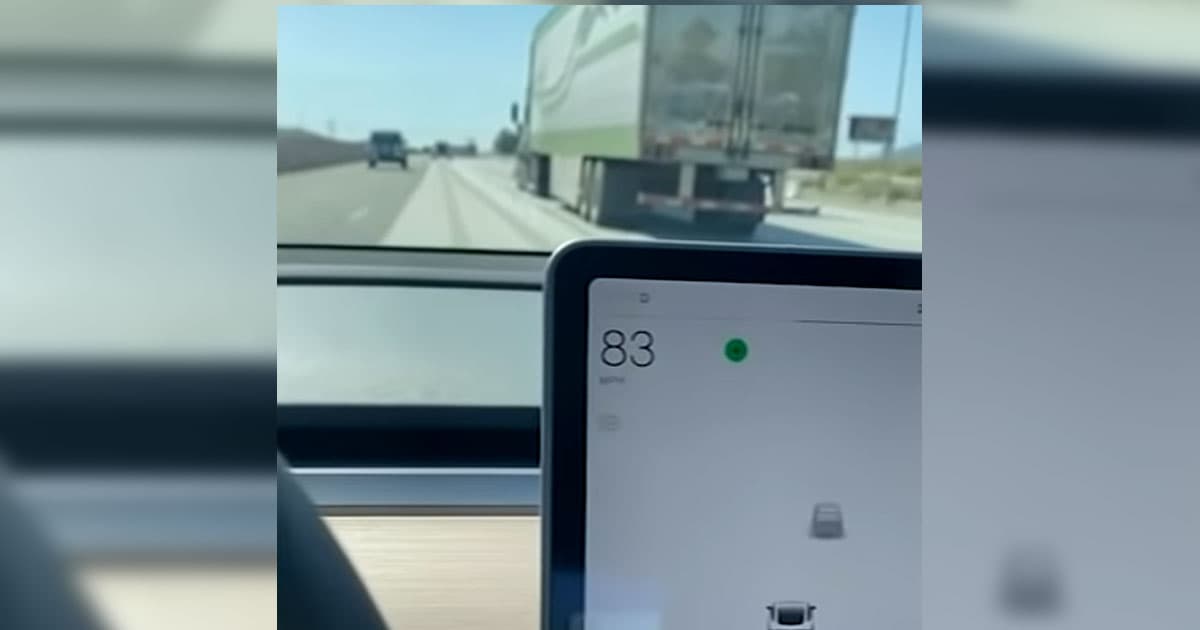 A Tesla Model 3 owner says he went through a terrifying experience with his vehicle last week: the car allegedly got stuck driving at 83 mph down a California freeway, KABC reports, with its main center console freezing completely.

If the alarming story holds up, it'll be a reminder that no driving technology is perfect — especially as we move towards a future in which more and more basic driving functions are being automated, with sophisticated yet imperfect computer systems both literally and figuratively taking the wheel.

The driver, Javier Rodriguez from Irvine, California, told KABC that all buttons and switches stopped working while traveling at 83 mph.

A video of the event, recorded by Rodriguez and provided to KABC, shows him struggling with the frozen system. Not even the air conditioning was functioning.

But it wasn't quite like the 1994 action blockbuster "Speed," in which Keanu Reeves' character had to maintain a minimum speed inside a bus — the Model 3's brakes did still work, Rodriguez said.

"I noticed that it started to get hot in the car and there started to be a weird scent coming," he told the broadcaster. "I was nervous that if I were to brake a whole lot that I wouldn't be able to gain the speed again to keep up with traffic and get around cars. I was nervous somebody was going to slam into me."

Fortunately, Rodriguez says he was able to take a highway exit, after which the car managed to reboot itself, returning its functions back to normal.

According to the driver, Tesla later "found poor communication from charge port door causing power conversion system to shut off in order to protect on board components during drive."

The hair-raising tale isn't exactly confidence inducing — after all, having your main onboard computer freeze while traveling down the freeway at 83 mph with no prior notice sounds terrifying, to say the least.

It's worth pointing out, though, that not every allegation about a Tesla malfunction turns out to hold water. A wave of "brake failures" in China last year, for instance, were later recanted.

Tesla has yet to respond to KABC's request for comment.

More on Tesla: Elon Musk Gets Sued Over Twitter Shenanigans