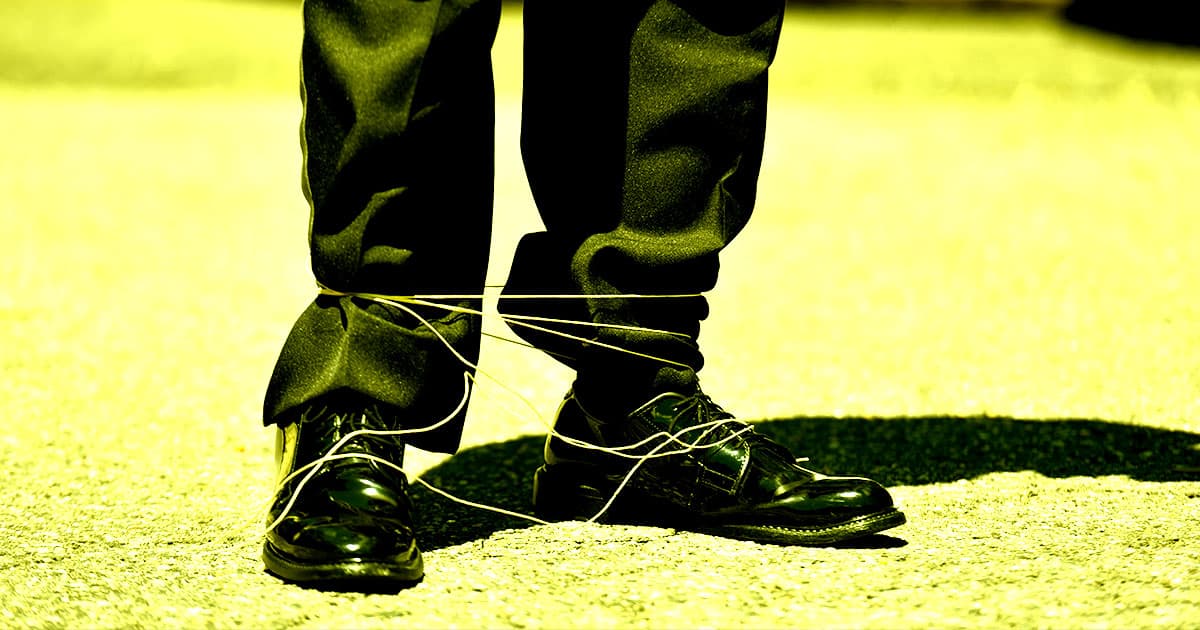 Wait, are they serious?

Wait, are they serious?

A company that sells "lasso guns" to cops is working on ways to get its firearm into medical institutions and even schools.

Records unearthed by Vice reveal that Wrap Technologies, the company that manufactures the BolaWrap lasso gun, has even received interest from at least one hospital to use its lasso gun to help restrain "noncompliant individuals."

Getting the lasso guns into hospitals, schools, and other non-police or military entities, however, would require the company's lasso guns to be exempt from the National Firearm Act (NFA). That's where Wrap's lobbying of the Bureau of Alcohol, Tobacco, Firearms, and Explosives (ATF) comes in, as records from an October 2021 investor call saw the company's since-resigned CEO and President Tom Smith informing stockholders that the company had applied to deregulate its latest model in hopes of broadening its sale prospects.

The goofy yet powerful guns whip ropes around targets, like cowboys with lassos — a weird idea that's started catching on among cops to restrain suspects.

The company's latest model, the BolaWrap 150, is the same as Wrap's previous lasso guns except that it uses an airbag-like mechanism to release its cord rather than gunpowder, the report notes.

This strategy, Vice added, is a tried-and-true one used by Smith, who founded Taser International with his brother in 1993 and was able to get the company's stun guns deregulated under the NFA after switching its products from gunpowder to a compressed gas propellant, which allowed the guns to be sold to private citizens and civilian institutions in some states.

Smith was appointed as CEO of Wrap in March 2021 and left in late January of this year — though not before applying for the determination from the ATF that, per its website, Wrap expects to be in its favor.

Wrap has yet to achieve the success of Taser (which changed its name to Axon Enterprises in 2017, five years after Smith left the company to "pursue opportunities to join other boards"), whose ubiquitous and dangerous stun guns are used as "non-lethal" gun alternatives by police departments all over the country.

Nevertheless, Wrap has already come under fire after Buffalo police were filmed in 2021 using one of the company's $900 lasso guns on a Black trans woman experiencing a mental health crisis instead of attempting to deescalate or engage with her at all. After the debacle, mental health experts told Vice that the lasso gun would likely cause more harm than good, even if it is billed as more "humane" than a gun, which sounds awfully familiar to the stun gun sales pitch.

Maybe the real question, though, is why anyone would think anyone should be shooting students at schools with lasso guns in the first place.

More on "nonlethal" weapons: Man Bursts Into Flames After Being Tased by Police

Dron't
Drama Engulfs Plan to Zap School Shooters With Taser-Toting Drones
Jun 4
Read More
Trigger Happy
Man Bursts Into Flames After Being Tased by Police
11. 8. 21
Read More
Drawing the Line
Satellite Images Show Progress on 100-Mile Long Skyscraper in Saudi Arabia
8:00 PM
Read More
+Social+Newsletter
TopicsAbout UsContact Us
Copyright ©, Camden Media Inc All Rights Reserved. See our User Agreement, Privacy Policy and Data Use Policy. The material on this site may not be reproduced, distributed, transmitted, cached or otherwise used, except with prior written permission of Futurism. Articles may contain affiliate links which enable us to share in the revenue of any purchases made.
Fonts by Typekit and Monotype.