Man Bursts Into Flames After Being Tased by Police

How "nonlethal" are stun guns, really? 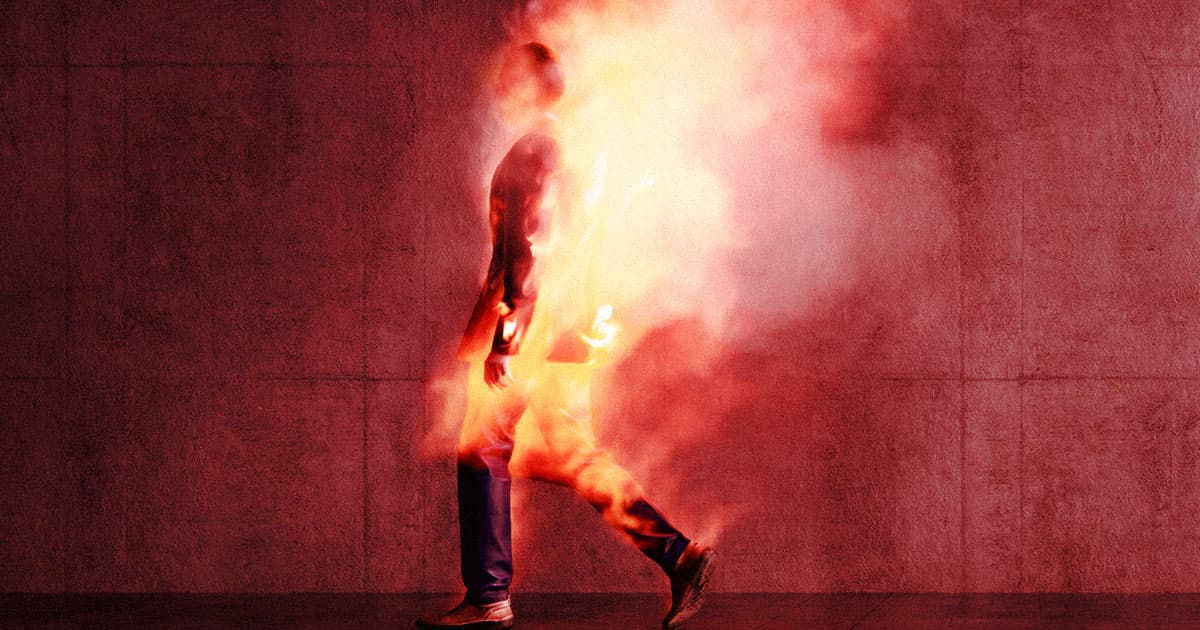 A New York man is in critical condition after dousing himself with hand sanitizer and being set ablaze when a police officer used a Taser on him, Albany's Times-Union newspaper reports — a grisly incident that raises deep questions about law enforcement's wielding of high tech weaponry against the public.

The bizarre encounter took place on Halloween weekend when Jason Jones, a 29-year-old man from Catskill, New York, walked into the village's police precinct. Cops told the Times-Union that Jones was familiar to them and said that he "appeared intoxicated" and was the one to start a confrontation. Village of Catskill Police Chief James Darling told the newspaper that officers "were afraid [Jones] was going to hurt himself, and that’s what started it."

According to the Times-Union and other local news sources, police have not yet revealed the details surrounding the incident, such as whether they saw Jones pour hand sanitizer on himself or if he did that before arriving at the station.

Jones' lawyer Kevin Luibrand told Hudson's Register-Star newspaper that he has requested all documents and security camera footage from the Village of Catskill Police Department to get to the bottom of what happened to his client. Jones is currently being treated at Syracuse's Upstate University Hospital in the burn unit.

While Jones' story is gruesome, it's far from the first time someone has been set on fire when hit with a stun gun.

In 2017, Axon, the company that makes Tasers, admitted that at least 15 people had been set ablaze after being stunned by their product when near flammable substances. Of those 15, five people died as a result of their burns.

In safety instructions geared towards law enforcement, Axon warned that its stun guns "can result in a fire or explosion when flammable gases, fumes, vapors, liquids or materials are present." Law enforcement personnel, the manual continues, should avoid using Tasers around flammable substances because the situation "could result in death or serious injury."

While stun guns such as Tasers are considered "less lethal" or even "nonlethal" weapons that can incapacitate people, there have been numerous safety concerns about them in the nearly 30 years they've been on the market.

Along with the risk of setting people ablaze, there's been mounting concern about police killing or maiming people who use drugs or have certain health conditions using stun guns. In other instances, people who were otherwise healthy and not under the influence have died or been seriously injured when police used stun guns in tandem with asphyxiation or other methods of extreme force. In 2018, a Reuters analysis found that more than 1,000 people had died after being shocked by Tasers, usually when other forms of force were deployed as well.

The makers of Taser have used the dubious diagnosis of "excited delirium" — a supposedly adrenaline-induced state of agitation and psychosis that results in sudden death that does not appear in any edition of the Diagnostic and Statistical Manual of Mental Disorders and is not accepted by the American Medical Association — to explain why some otherwise healthy people have dropped dead when being stunned with their products.

Critics, however, counter the questionable diagnosis as an excuse for racism and police brutality.

And hovering over the entire debate, of course, are larger questions about the role of police in society — and, in particular, why their interactions with people in crisis so often escalate or turn deadly.

More on stun guns: This Futuristic Non-Lethal Weapon Will Electrocute Your Enemies

Read This Next
From the Dept. of Bad Ideas
Cops Upload Image of Suspect Generated From DNA, Then Delete After Mass Criticism
Dron't
Drama Engulfs Plan to Zap School Shooters With Taser-Toting Drones
Futurism
Crime-Fighting AI Put a Guy in Jail for a Year With Little Evidence
Redrum
Murders Have Spiked in Major US Cities Since the Pandemic
Futurism
When Can Law Enforcement Look at Your Devices? A Definitive List
More on Future Society
Head Like A Hole
Wednesday on futurism
Elon Musk's Crying About Trent Reznor Shows That He Is a Big, Big Baby
Miserly Musk
Tuesday on the byte
Cheapskate Elon Musk Refusing to Pay Bills at Twitter
Secrets Secrets
Tuesday on futurism
Elon Musk Vigorously Denies That SBF Secretly Owns Part of Twitter
READ MORE STORIES ABOUT / Future Society
Keep up.
Subscribe to our daily newsletter to keep in touch with the subjects shaping our future.
+Social+Newsletter
TopicsAbout UsContact Us
Copyright ©, Camden Media Inc All Rights Reserved. See our User Agreement, Privacy Policy and Data Use Policy. The material on this site may not be reproduced, distributed, transmitted, cached or otherwise used, except with prior written permission of Futurism. Articles may contain affiliate links which enable us to share in the revenue of any purchases made.
Fonts by Typekit and Monotype.