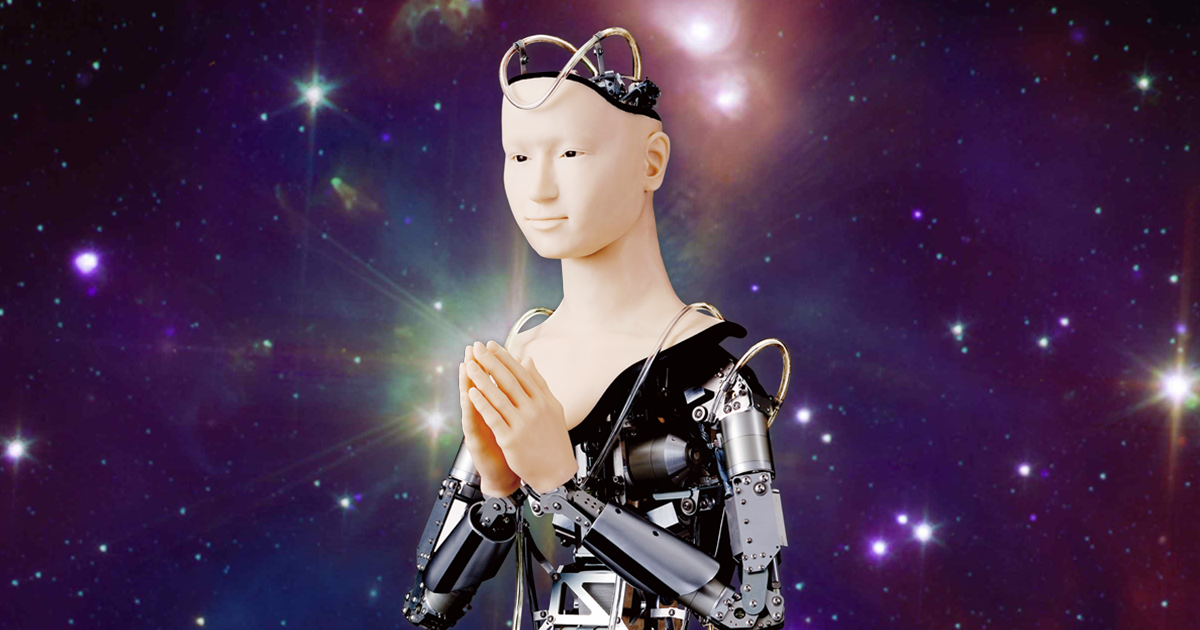 People in Japan Are Worshiping a Cyberpunk-Looking Robot Goddess

It's a strange depiction of a robot deity, with exposed aluminum actuators and electronics.

It's a strange depiction of a robot deity, with exposed aluminum actuators and electronics.

Monks at the ancient Kodaiji temple in Kyoto, Japan, recently gathered for a traditional ceremony in which they chanted and rang bells to a new statue of a deity named Mindar, the Buddhist Goddess of Mercy.

But the statue isn't carved out of traditional stone or wood, according to a new story by The Diplomat. Instead, it's a strange, cyberpunk depiction of a robot deity, with exposed aluminum actuators and electronics that its creators say is a new way of expressing spiritual belief in a technological age.

The Kodaiji temple's leadership collaborated with local robotics researchers to design and build the 6'4" robot, which delivers a 25-minute sermon about the "Heart Sutra," a Buddhist religious text.

In an interview with The Diplomat, one of the researchers riffed on the idea that the robot goddess doesn't comprehend its sermon by pointing out that the same is true of many religious leaders.

"Monks don’t discuss the true meaning of the Heart Sutra to worshippers; they just read it like poetry," Kohei Ogawa, a robotics professor at the University of Osaka who worked on the robot, told The Diplomat. "But this doesn’t work. The monks are like robots."

The Mindar android also bends gender, according to The Diplomat, with its human-like face and chest designed to evoke both male and female characteristics.

"Everything depends on the person who is watching the robot," Ogawa told The Diplomat. "If someone wants to treat the android as a man, there will be some elements that represent a male form and vice versa."

More on robot gods: Way of the Future: A New Church Worships an AI God