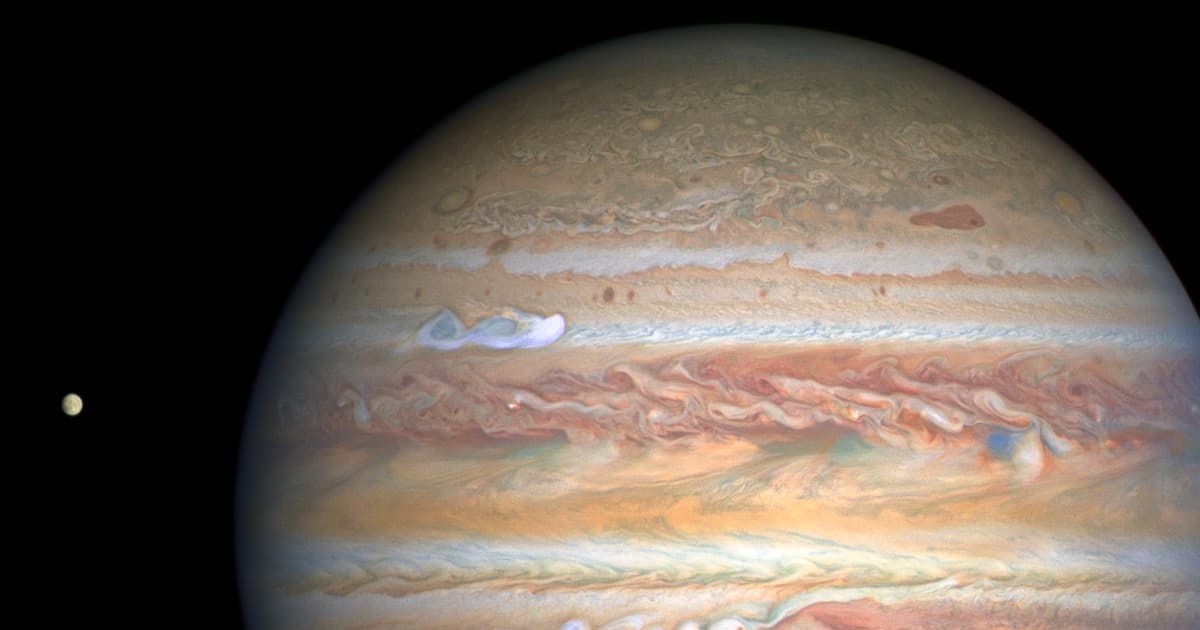 Storm in a Teacup

Last month, NASA's Hubble Space Telescope took a gorgeous new close-up image of Jupiter some 406 million miles from Earth, with the planet's icy moon Europa pictured off to the left.

In addition to the iconic Great Red Spot region, scientists were able to spot a brand new storm brewing — and it's a big one.

Stretched along Jupiter's mid-northern latitudes is a bright white storm, traveling along the planet's surface at 350 mph (56 km/h), according to NASA.

The storm erupted on August 18, with two additional plumes closely following it at the same latitude.

The image also shows Jupiter's Great Red Spot in a rich dark color. The storm now spans about 9,800 miles end to end, large enough to swallow the Earth. It's technically shrinking in size, but we have no idea why.

Below the Red Spot is Oval BA, or "Red Spot Junior" as astronomers like to call it. According to the new image, the smaller spot is slowly turning to a similar shade than its much larger cousin.

Jupiter Ascending
A Wave of Incredible Heat Ripped Through Jupiter
Oct 14
Read More
The James Webb Space Telescope Is Going to Stare Straight Into Jupiter
Apr 12
Read More
Into Darkness
Inside NASA's Bold Proposal to Probe the Mysteries of Dark Matter
Mar 11
Read More
+Social+Newsletter
TopicsAbout UsContact Us
Copyright ©, Camden Media Inc All Rights Reserved. See our User Agreement, Privacy Policy and Data Use Policy. The material on this site may not be reproduced, distributed, transmitted, cached or otherwise used, except with prior written permission of Futurism. Articles may contain affiliate links which enable us to share in the revenue of any purchases made.
Fonts by Typekit and Monotype.