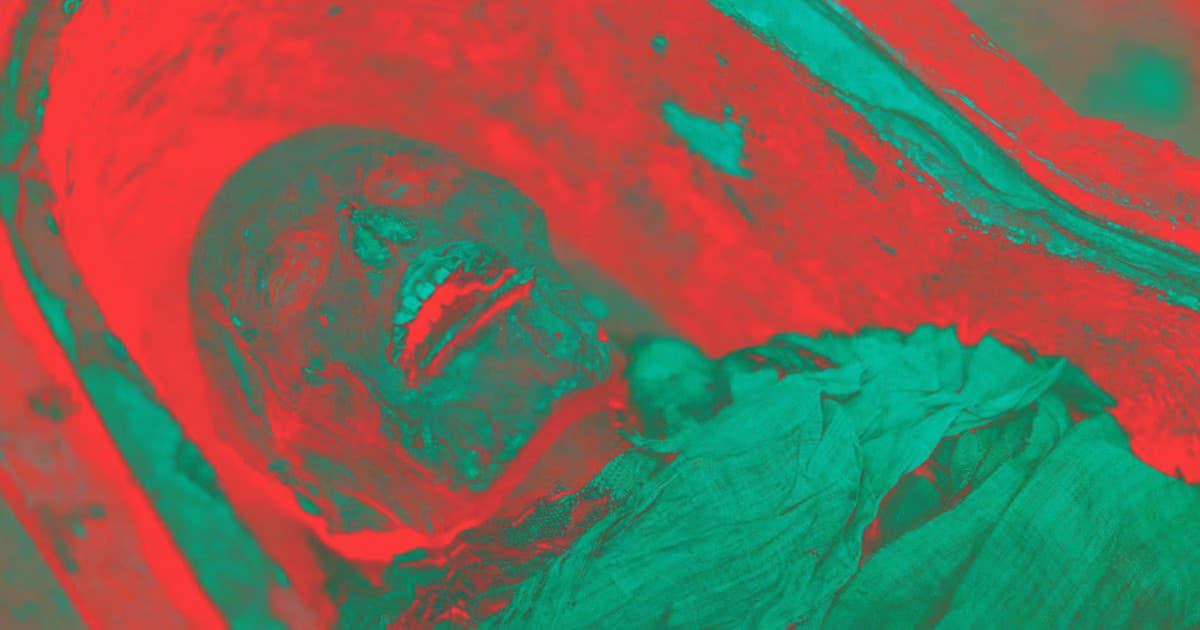 An Egyptian priest just spoke for the first time in 3,000 years.

1. 24. 20
The Telegraph via YouTube/Victor Tangermann

An Egyptian priest just spoke for the first time in 3,000 years.

Voice From the Past

A mummified Egyptian priest just "spoke" for the first time in 3,000 years.

Using Computed Tomography (CT) scans of the mummy Nesyamun's larynx and throat, a team of British researchers was able to 3D-print a replica of his vocal tract — and then use it to hear what his voice would've sounded like when he was alive.

For their study, which was published on Thursday in the journal Scientific Reports, the researchers transported the mummy from Leeds City Museum to Leeds General Infirmary where they imaged its vocal tract using a CT scanner.

The team then paired their 3D-printed recreation of Nesyamun's vocal tract with an artificial larynx regularly used for speech synthesis.

The sound produced by the replica vocal tract more closely resembles the bleat of a goat than human language. But the researchers believe it's only the beginning of what may ultimately be possible using today's technology.

"What we’d like to try to do next is develop a computer model that will allow us to move [the vocal tract] around and form different vowel sounds and hopefully, ultimately words," researcher John Schofield told The Guardian. "This [current sound] is never a sound he would have made in life, but from it we can create sounds that would have been made during his lifetime."

More on mummies: We Can Now See Individual Cells in This Mummy’s Hand

Buck Like Funnies
This Plastic Bunny Has DNA Explaining How to Make More Bunnies
12. 10. 19
Read More
3D Printed Sugar Scaffolds Could Help Grow Organs, Then Dissolve Away
5. 24. 18
Read More
What NASA’s First 3D Printed Rocket Parts Mean for the Space Launch System
9. 25. 17
Read More
+Social+Newsletter
TopicsAbout UsContact Us
Copyright ©, Camden Media Inc All Rights Reserved. See our User Agreement, Privacy Policy and Data Use Policy. The material on this site may not be reproduced, distributed, transmitted, cached or otherwise used, except with prior written permission of Futurism. Articles may contain affiliate links which enable us to share in the revenue of any purchases made.
Fonts by Typekit and Monotype.