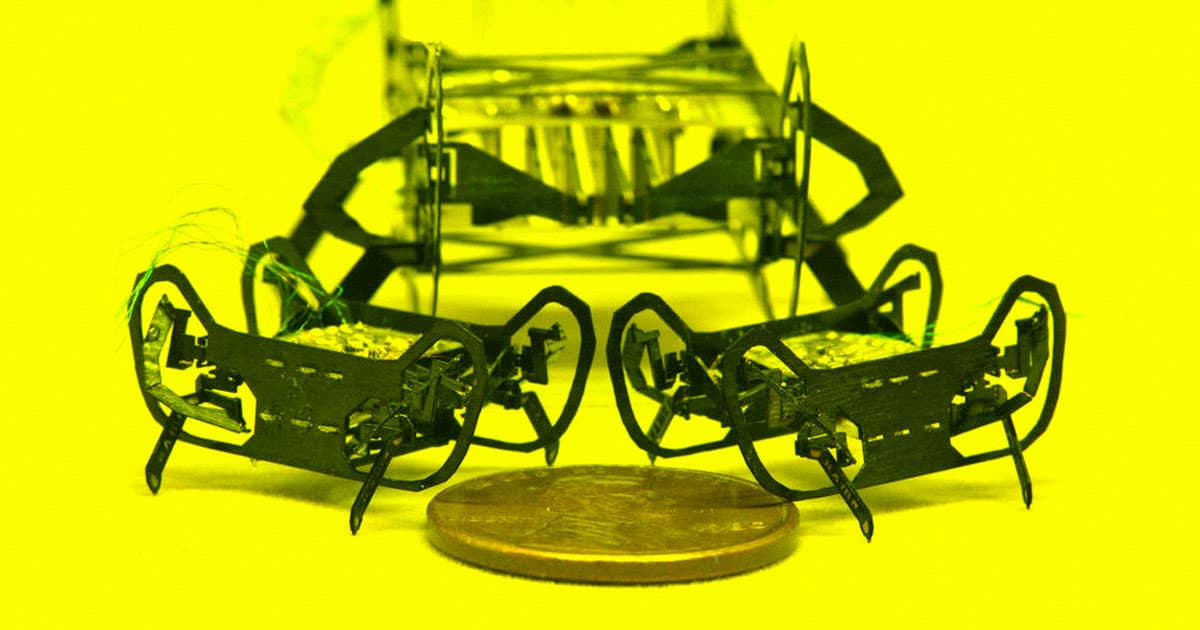 Watch Harvard's Penny-Sized Robot Scuttle Around Like a Cockroach

This terrifying robobug is one of the smallest, fastest robots in existence.

This terrifying robobug is one of the smallest, fastest robots in existence.

Researchers at Harvard have created a tiny cockroach-inspired robot that's only about the size of a penny and weighs just 0.3 grams.

It can run, jump, carry heavy payloads relative to its size — and scuttle really, really fast. In fact, the robot "can run about 14 body lengths per second, making it not only one of the smallest but also one of the fastest microrobots," according to a press release.

Directly scaled up to human size — and not accounting for factors like mass — that's more than twice the speed as world record sprinter Usain Bolt.

The bot, dubbed "HAMR-Jr," is a half-scale model of a different robot they taught how to swim and walk underwater.

"Most robots at this scale are pretty simple and only demonstrate basic mobility," Kaushik Jayaram, Harvard researcher and first author of a paper about the bot presented at the International Conference on Robotics and Automation (ICRA 2020) this week, said in the statement.

"We have shown that you don’t have to compromise dexterity or control for size," Jayaram added, noting that "we proved that this process can be applied to basically any device at a variety of sizes."

The majority of the design can be etched into a two dimensional sheet and popped out, origami style, to create a 3D sled-like structure.

A different robot, dubbed "Robobee," created by researchers at the Harvard Microrobotics Lab last year, weighs less than one-tenth of a gram but is still capable of flying — albeit while attached to a tether and only for short periods.

READ MORE: Harvard shrank its insect-inspired microrobot to the size of a penny

More on microrobots: Tiny Spies: This Insect-Like Flying Robot is Smaller Than a Penny

We Now Have Soft Robots With a Sense of Touch. But Why?
3. 2. 18
Read More
New Smart Window Can Turn Opaque With Just The Flick Of A Switch
3. 17. 16
Read More
"4D Printing" Creates Objects That Change Shape
1. 27. 16
Read More
+Social+Newsletter
TopicsAbout UsContact Us
Copyright ©, Camden Media Inc All Rights Reserved. See our User Agreement, Privacy Policy and Data Use Policy. The material on this site may not be reproduced, distributed, transmitted, cached or otherwise used, except with prior written permission of Futurism. Fonts by Typekit and Monotype.