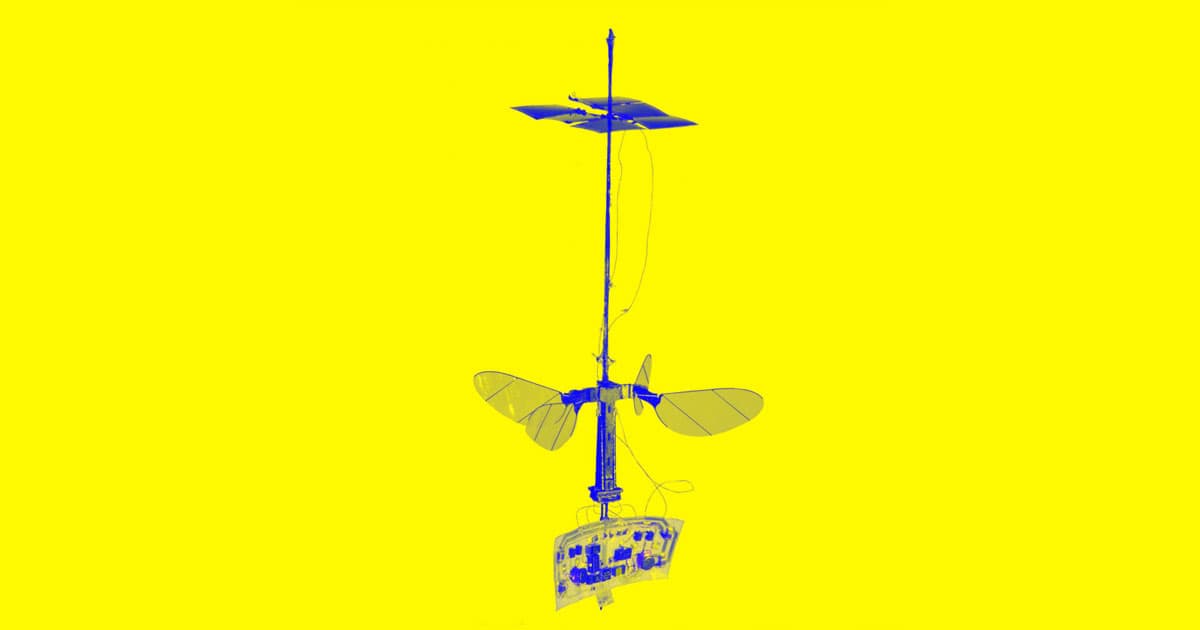 This Minuscule Robotic Bee Only Uses Solar Energy to Fly

The RoboBee X-Wing weighs less than half a gram and only consumes 120 milliwatts.

The RoboBee X-Wing weighs less than half a gram and only consumes 120 milliwatts.

Researchers at the Harvard Microrobotics Lab have come up with the latest version of their astonishing RoboBee. Introducing: the RoboBee X-Wing — that's the robot's nickname.

The RoboBee is a minuscule robot that's inspired by, you guessed it, the biology of a bee. It used to have just two wings and weigh less than one-tenth of a gram. But so far, it had to rely on a tether for power, enabling it to fly.

The RoboBee X-Wing takes it to the next level by sporting solar cells and an extra pair of wings for more stable and mostly autonomous flight.

But there is one big caveat: it can only sustain flight for a measly half a second — with special lights shining down on it from above — since it can't really lug a battery around as that would make it heavier many times over.

“Moving from two wings to four wings was really a factor of, how do we increase our lift without also increasing our power consumption,” Harvard engineer E. Farrell Helbling, who worked on the robot and coauthored the study published by Nature today, told Wired.

The news comes after a team of engineers from the University of Southern California in Los Angeles built a four-winged flying robot called Bee+ earlier this year, which weighs considerably more (95 grams), but sports a footprint smaller than a penny.

READ MORE: What Could Possibly Be Cooler Than RoboBee? RoboBee X-Wing [Wired]

We Now Have Soft Robots With a Sense of Touch. But Why?
3. 2. 18
Read More
New Smart Window Can Turn Opaque With Just The Flick Of A Switch
3. 17. 16
Read More
"4D Printing" Creates Objects That Change Shape
1. 27. 16
Read More
+Social+Newsletter
TopicsAbout UsContact Us
Copyright ©, Camden Media Inc All Rights Reserved. See our User Agreement, Privacy Policy and Data Use Policy. The material on this site may not be reproduced, distributed, transmitted, cached or otherwise used, except with prior written permission of Futurism. Fonts by Typekit and Monotype.