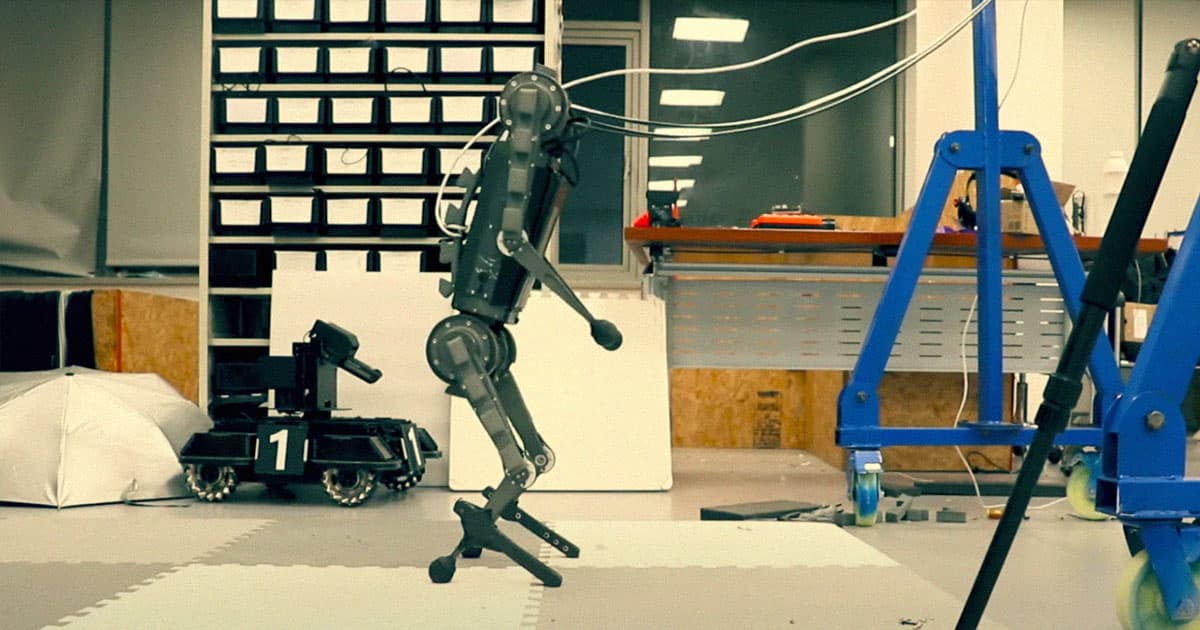 It's the literal robot uprising.

It's the literal robot uprising.

Perhaps it's only a matter of time until the robots catch up with us and take over the planet.

Case in point: a four-legged robodog learning how to walk on its two hind legs.

Researchers from Worcester Polytechnic Institute (WPI) and ShanghaiTech University have developed an off-the-shelf "shin" solution that allows quadruped robots to speedrun evolution, IEEE Spectrum reports — and the results are eerie.

The modification is meant to allow practically any quadruped to walk on two legs, with minimal amounts of changes.

The 3D-printed appendages can be installed onto two of the robot's legs, allowing it to balance its entire weight on them.

In fact, as demonstrated in a video, the reinforcements allowed a small quadruped robot to take its first, albeit shaky steps.

"Bipedal robots usually have more degrees of freedom in their legs to allow a more dynamic and adaptive locomotion," WPI researcher Andre Rosendo told IEE Spectrum, "but in our case, we are focusing on the multimodal aspect to reap the benefits from two worlds: stability and speed from quadrupeds, manipulability and a gain in operational height from bipeds."

Thanks to the robot's ability to stand up, "we already have some preliminary results on climbing to places that are higher than the center of gravity of the robot itself," Rosendo added. "After mechanical changes on the forelimbs, we will better evaluate complex handling that might require both hands at the same time, which is rare in current mobile robots."

It's a fascinating glimpse of what state-of-the-art robots could soon be capable of. But, perhaps, it's best to be cautious of what we end up teaching these robots — you know, before it's too late.