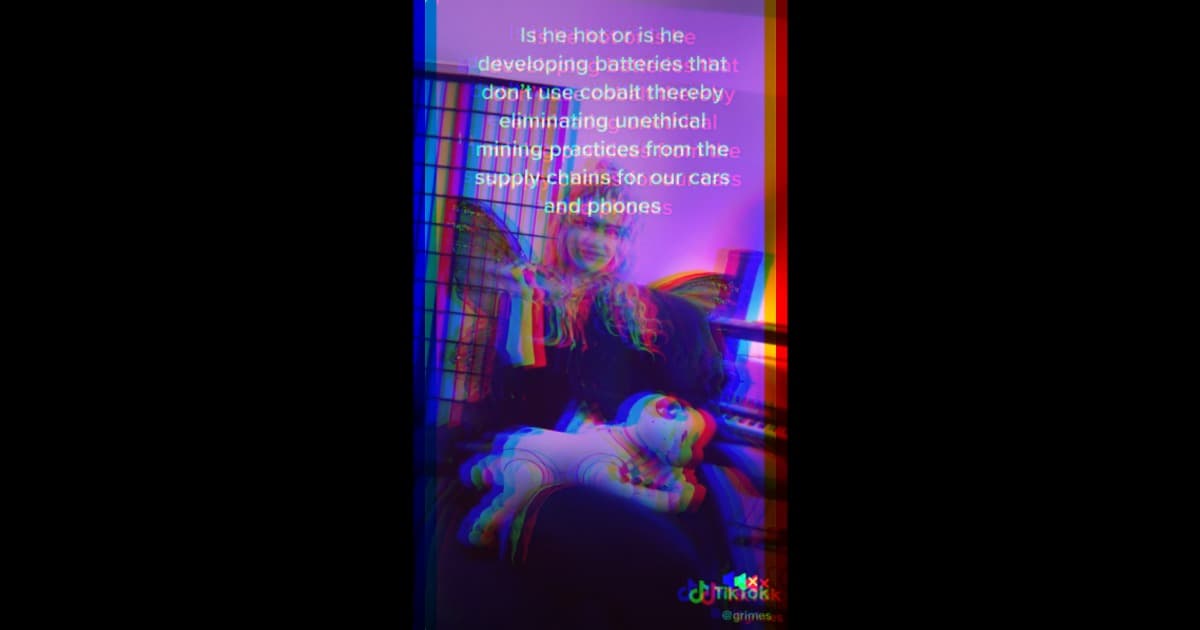 To All My Haters

"Stop harassing me on this app over fake news."

"Stop harassing me on this app over fake news."

Grimes wants you to know that she's got Elon’s back — and she'll make her point with a knife if she needs to.

Canadian musician Claire Elise Bouche (aka Grimes) posted a TikTok on Friday defending her partner Elon Musk. The video is fairly on brand for the pop star. Set to a remixed "Pretty Young Twerkulator" by City Girls, it features her sitting in a chair petting a robot dog as AI butterfly wings flap behind her.

"Stop harassing me on this app over fake news," Grimes said in the post’s caption. "I am not my bf’s spokesperson."

Grimes defending Elon Musk while petting a robot dog on TikTok is certainly a thing that has happened. pic.twitter.com/yEMorHcyu0

You Call That a Knife?

Throughout the video, text pops on the screen boasting Musk’s accomplishments.

"Is he hot or is he out to destroy big oil," said one.

"Is he hot or will he put the first human on Mars," said another.

The text goes on about more specific Musk initiatives including a "$100 million prize for scalable ideas to remove CO2 from the earths [sic] atmosphere" and developing batteries that don’t rely on unethically-sourced minerals. To punctuate her point, she pulls out a knife and gives viewers a smile at the end of the video.

In June, she made a post on the social media platform where she claimed AI provided "the fastest path to communism." This post has made a lot of people angry and been widely regarded as a bad move.

All in all, her most recent TikTok is a pretty on brand post for the "Delete Forever" singer. If nothing else, it's a fairly sweet defense of her baby's father and the person she loves (in spite of the knife brandishing).

More on Grimes: Grimes Says AI Will Usher in an Era of Luxurious Communism