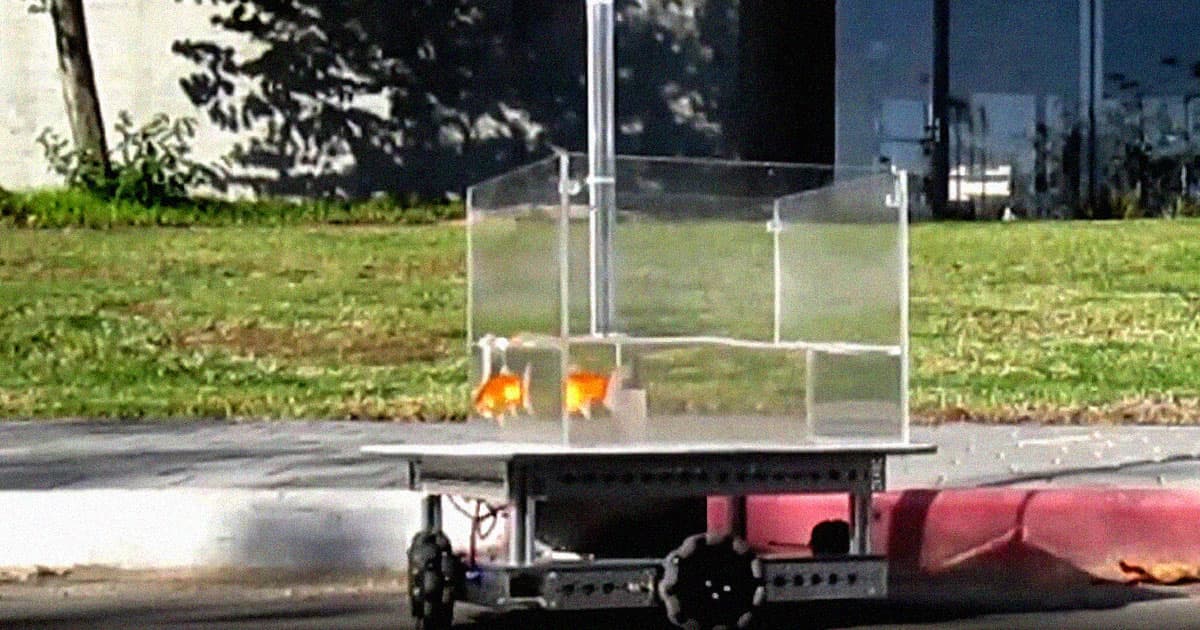 Is this how it begins?

Is this how it begins?

Fish Out of Water

A team of Israeli scientists have allowed a goldfish to navigate dry land — or, at least, remotely control a fish tank on wheels.

Is it the beginning of the cyborg fish uprising, or just an innocent goldfish going out for a stroll? We'll leave that up to you to decide.

The team of scientists from Ben-Gurion University designed a special "Fish Operated Vehicle," (FOV) a four-wheeled cart featuring a computer, a LIDAR system, and a conservatively-sized plexiglass water tank, all in an effort to put the navigational skills of several goldfish to the test as the computer system translated the movement of the fish into movement of the vehicle.

I am excited to share a new study led by Shachar Givon & @MatanSamina w/ Ohad Ben Shahar: Goldfish can learn to navigate a small robotic vehicle on land. We trained goldfish to drive a wheeled platform that reacts to the fish’s movement (https://t.co/ZR59Hu9sib). pic.twitter.com/J5BkuGlZ34

The results were astonishing: the goldfish were able to move the FOV to a target zone in order to receive a small reward in the form of, well, fish food.

At first, many of the fish took 30 minutes to find their targets — while dodging decoys and dead ends along the way — but by the end of the experiment, they needed less than a minute.

The takeaway: goldfish may have a surprisingly excellent sense of direction, even way outside their watery comfort zone.

"These results demonstrate how a fish was able to transfer its space representation and navigation skills to a wholly different terrestrial environment, thus supporting the hypothesis that the former possess a universal quality that is species-independent," the researchers conclude in their paper, published in the journal Behavioral Brain Research.

Will we be seeing goldfish jetting by on the freeway any time soon? That's far less likely.