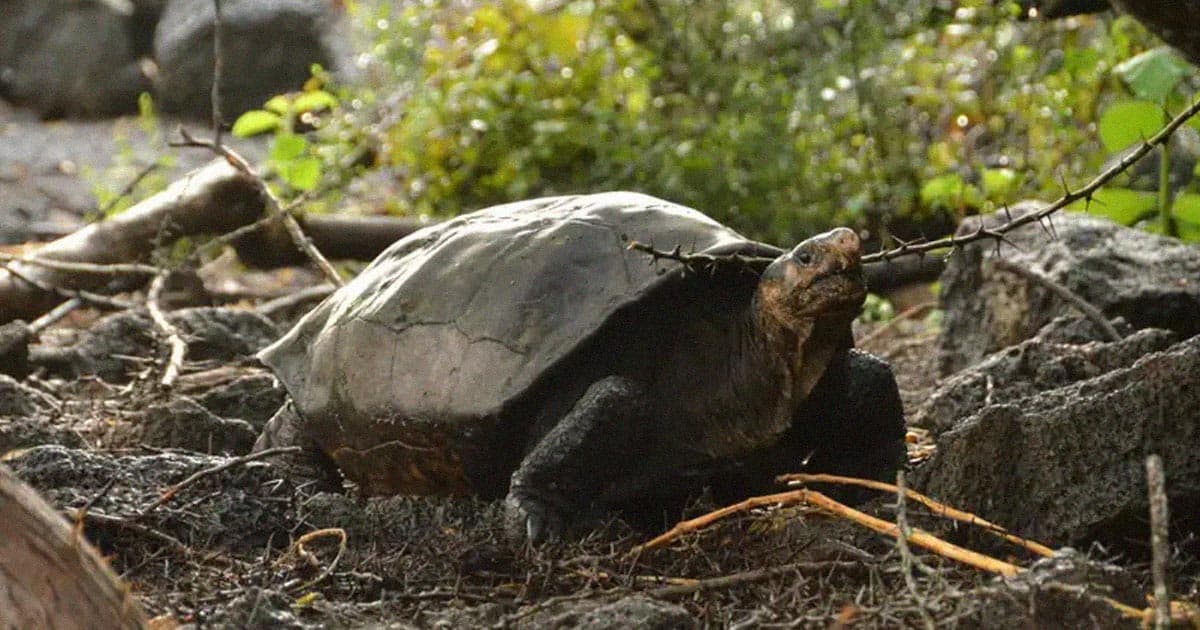 Let's get a round of applause for this beautiful tortoise!

Let's get a round of applause for this beautiful tortoise!

Behold Fernanda, who, through genetic sequencing, has been confirmed as the only known tortoise of her kind.

The Fernandina Giant Tortoise (chelonoidis phantasticus) was — or, now, once again is — native to the eponymous Fernandina, an active volcano isle located in the Western Galápagos. Also known whimsically as the "fantastic giant tortoise," the species was believed to be extinct for over a century, a loss that scientists attributed to centuries of volcanic eruptions.

That is, until 2017, when Galápagos national park rangers found a surprising sign of hope for the species: traces of the reptile's dung. Fernanda was discovered two years later by a team of researchers from the Galápagos Conservancy's Giant Tortoise Restoration Initiative (GTRI).

While the discovery was intriguing, the researchers couldn't be totally sure that Fern — as she's been affectionately dubbed — was the slow-moving, unbothered reptile they'd dreamed of finding. The last known Fernandina Giant Tortoise, a single male, was collected from the island in 1906; Fernanda was significantly smaller than this specimen and lacked its distinctive "saddlebag" shaped shell. So, to authenticate their lineage, the researchers turned to genetics.

DNA from each tortoise — a sample of Fernanda's blood and a piece of the unnamed male's bone — were shipped to Princeton University, which scientists were able to sequence genetically and compare. The findings, newly published in the journal Communications Biology, verified that our herpetological heroine is, in fact, a Fernandina Giant Tortoise.

"We simultaneously were able to show the connection between Fernanda and the other Fernandina tortoise, and also the distinctiveness of those two tortoises from species that we see on other islands," Stephen Gaughran, a Princeton University researcher and co-author of the paper, told New Scientist. "I was surprised, and then once it sank in, I was really excited about it."

According to New Scientist, Gaughran is hopeful that there are more fantastic giant turtles hanging out on the island. Fernandina is a difficult terrain to explore, but if scientists can locate a male, there's hope for the species — Fern is likely about 50 years old, and scientists believe she'll live until 200. In human years, this legend is only in her twenties.

The discovery is heartening at a time when all sea life — and all wildlife everywhere, really — is suffering the devastating consequences of unchecked human development. Fernanda is a symbol of hope for conservation efforts around the world — which are needed now more than ever.