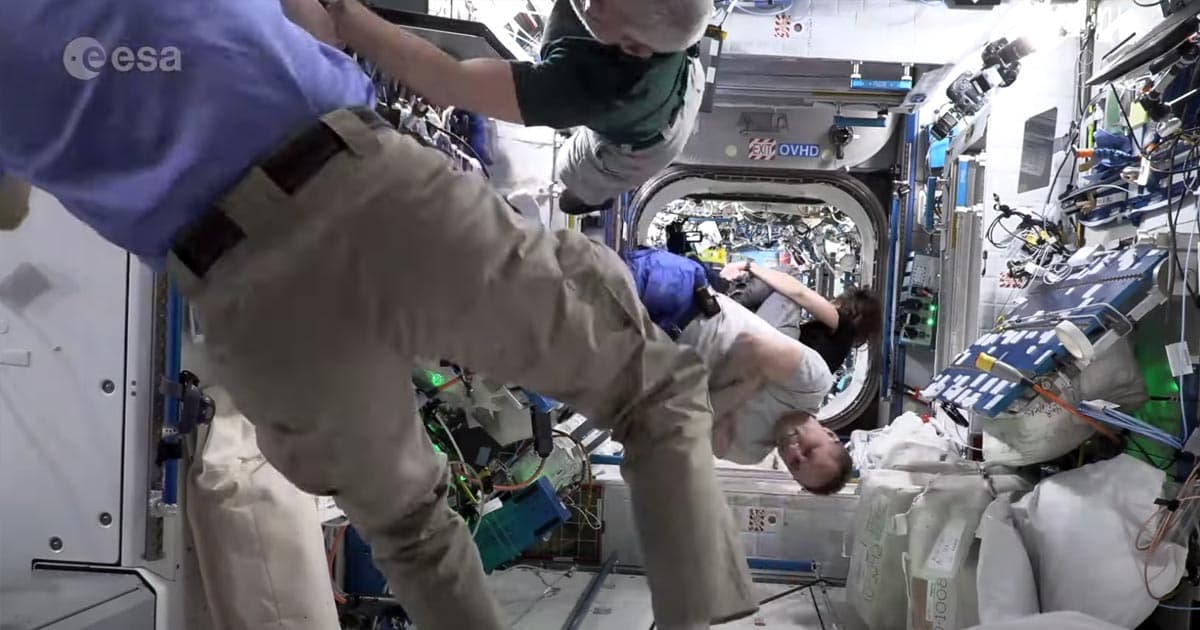 Charming footage from from the interior of the International Space Station shows what happens to the astronauts inside when the ship fires its thrusters.

That's cool on its own, but it's also a terrific demonstration of Newtonian physics. Case in point, instead of the astronauts moving inside the ISS, the video that the European Space Agency posted to YouTube shows the ISS moving while the crew remain suspended in microgravity.

The maneuver is especially exciting because it's astronaut Matthias Maure's first mission to the space station, and the Expedition 66 crew line up behind him to tuck their knees in while the ISS moves, making for a super slow kind of off world carnival ride (and, it's worth noting, the ESA says the video was also sped up 8 times.)

The video may also lend credence to interpretation that Russia's head cosmonaut left Roscosmos because there wasn't enough work for him to do on the ISS. If crew on various teams have time to float around for fun, it's reasonable to suspect they're working overtime to fill up their downtime.

Regardless of the cultural implications of this clip — such as the fact that terrestrial warfare is affecting even life in space — it still puts a smile on your face. It's wholesome to know that wherever we are, the basic human experience of creating fun is unlikely to disappear.

Duck and Roll
Russia Forced to Dodge Space Debris From When It Blew Up Satellite
Jun 17
Read More
Astronaut Drip
We Just Got the First Peek at NASA's Artemis Moon Landing Suits
Jun 3
Read More
Overloaded
Whiny Space Tourists Say They Were Too Busy on the Space Station
May 14
Read More
+Social+Newsletter
TopicsAbout UsContact Us
Copyright ©, Camden Media Inc All Rights Reserved. See our User Agreement, Privacy Policy and Data Use Policy. The material on this site may not be reproduced, distributed, transmitted, cached or otherwise used, except with prior written permission of Futurism. Fonts by Typekit and Monotype.