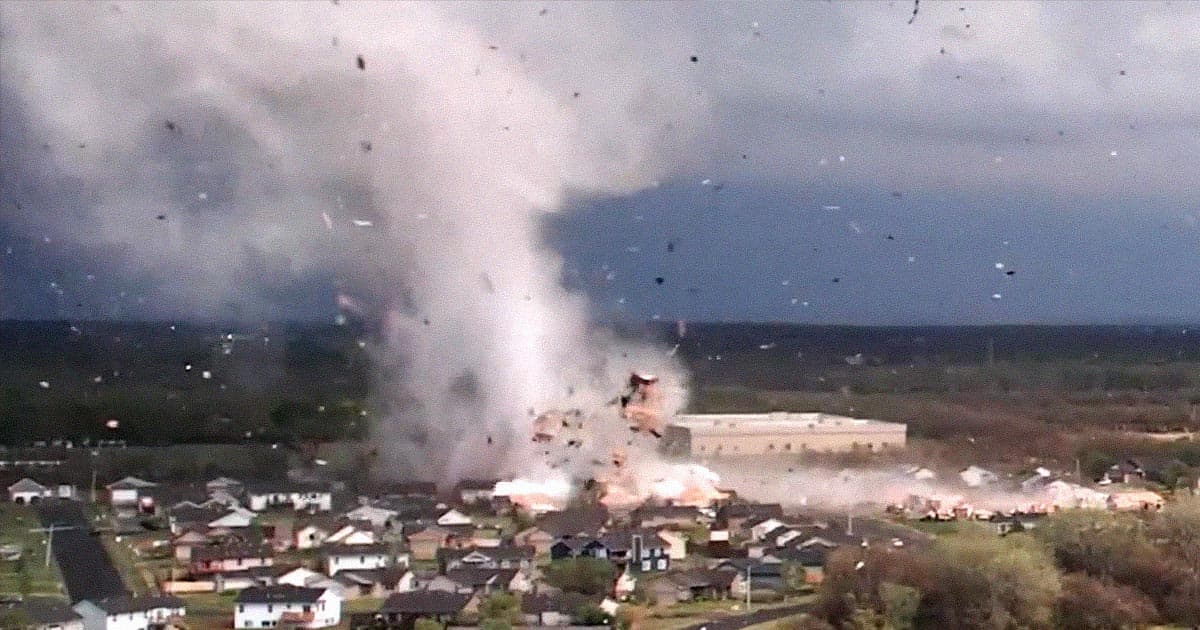 The crisp high-definition video, making the rounds on social media today, shows the tornado first form in spectacular detail — and then show off its horrifying destructive power.

"Note how the tornado propagates via vortex dynamics and likely terrain," meteorologist Reed Timmer wrote in a tweet accompanying the video. "Incredibly, no lives were lost by this tornado."

Highest-res drone footage of the Andover, KS #tornado which has received a preliminary rating of EF3. Note how the tornado propagates via vortex dynamics and likely terrain. Incredibly, no lives were lost by this tornado pic.twitter.com/FJDBH8TAv6

The raging twister, one of an estimated 15 in the area, leveled dozens of structures in Andover late last week, according to CNN. It was rated an EF-3, meaning it was pretty serious, with winds reaching speeds of between 136 and 165 mph.

According to the US National Oceanic and Atmospheric Administration (NOAA), tornadoes form after winds blow in different directions at different speeds, first forming a large thunderstorm. Inside this thundercloud, also known as a supercell, hot and cold air currents can result in spinning air currents.

Tornadoes have been known to reach 300 mph, even stripping asphalt off roads.

While scientists are getting better at predicting tornadoes thanks to detailed satellite and radar imagery and computer forecasting models, the violent storms can still be surprisingly unpredictable, especially when it comes to anticipating where they'll go next.

It likely won't be the last devastating tornado season experienced by the Midwest, either — in part due to climate change making extreme weather events like it increasingly common.

Updated to remove incorrect references to the storm as a hurricane rather than a tornado.

More on tornadoes: Tornadoes Like Kentucky’s May Be Getting Stronger Due to Climate Change, Scientists Say

Tornado Watch
Tornadoes Like Kentucky's May Be Getting Stronger Due to Climate Change, Scientists Say
12. 12. 21
Read More
Hey Cousin
Elon Musk Is Hiring Relatives at Twitter in Literal Nepotism
4:04 PM
Read More
Shark Week
Scientists Stumble Upon Huge Graveyard of Sharks, Deep Under Ocean
3:21 PM
Read More
+Social+Newsletter
TopicsAbout UsContact Us
Copyright ©, Camden Media Inc All Rights Reserved. See our User Agreement, Privacy Policy and Data Use Policy. The material on this site may not be reproduced, distributed, transmitted, cached or otherwise used, except with prior written permission of Futurism. Articles may contain affiliate links which enable us to share in the revenue of any purchases made.
Fonts by Typekit and Monotype.