Tornadoes Like Kentucky's May Be Getting Stronger Due to Climate Change, Scientists Say 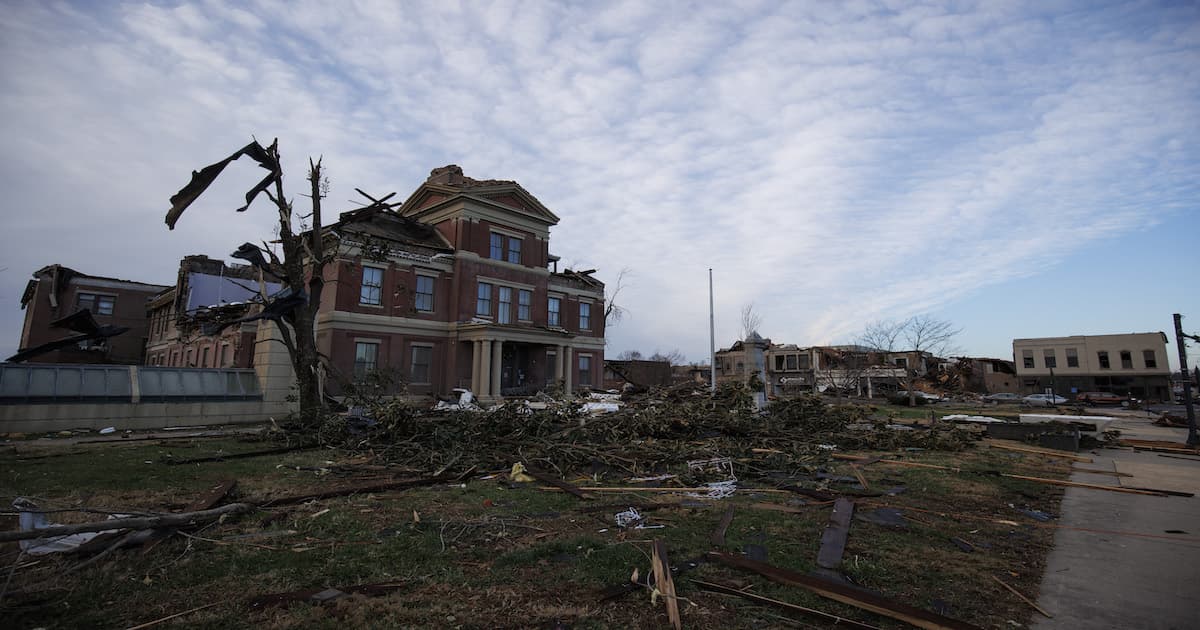 After horrific tornadoes devastated thousands of homes and killed dozens across Illinois, Kentucky, and Tennessee, experts are warning that climate change could be making the fearsome storms stronger.

"As last night showed severe tornadoes can happen in any season, especially if the weather is unusually warm, as it was last night," said Dr. Robert Rohde, lead scientist at Berkeley Earth, on Twitter Saturday morning.

"Historically, December has the fewest tornadoes in the USA," Rohde added.

Rohde isn't alone in noticing how unseasonably warm the December evening was, and multiple other scientists say climate change could have aggravated the storms. A new report from the Washington Post gathered insights from numerous scientists who say that unfortunately, storms like this may become more common and should be further researched.

"A lot of people are waking up today and seeing this damage and saying, ‘Is this the new normal?'" Victor Gensini, a meteorology professor at Northern Illinois University told the Post. "It’ll be some time before we can say for certain what kind of role climate change played in an event like yesterday."

The warmer the air and the colder the cold front that clashes into it, the more turbulent and violent the storms become. Temperatures in the tornado's path helped created a more powerful storm, according to WaPo, rising into the 70s to near 80 degrees Friday evening. In Memphis, a 103-year-old record high was broken when temperatures hit 79 degrees Farenheit.

"It’s absolutely fair to say that the atmospheric environments will be more supportive for cool-season tornado events," Gensini told the Post.

However, that doesn't mean there's a definite link between climate change and worsening tornados, and scientists say we still have more to learn.

"Tornadoes are, unfortunately, one of the extreme events where we have the least confidence in our ability to attribute or understand the impact of climate change on specific events," Zeke Hausfather, climate scientist at the Breakthrough Institute, in Oakland, CA told the Post. "There is not much evidence to date that the number of strong tornadoes is different today than it was over much of the past century."

Although scientists may need more time to figure out just how tornadoes may be changing, if at all, residents in other parts of the country know personally how the damage sticks around long after buildings are repaired and power is restored.

On Friday evening, residents of Nashville, TN took to Twitter to talk about surviving the devastating March 2020 tornado that killed two and decimated entire blocks of historic music venues and bars. Many also shared photos of their tornado safety planning and shared how anxious they remained during this weekend's storm.

"Not sure I’ve ever stayed up this late," tweeted Tennessee-based news editor Holly McCall, echoing the thoughts of many Nashvillians.

Even if it takes scientists years to catch up, people in the South and Midwest know firsthand how devastating these storms are, and many say they've never seen anything like it. Although it's traumatizing and hard to admit, back-to-back years with high tornado death tolls means it may be a matter of time until data catches up with what everyday people seem to already believe: the weather feels like it's getting worse.

More on climate trouble: Scientists Are Building a "Black Box" to Record End of Civilization