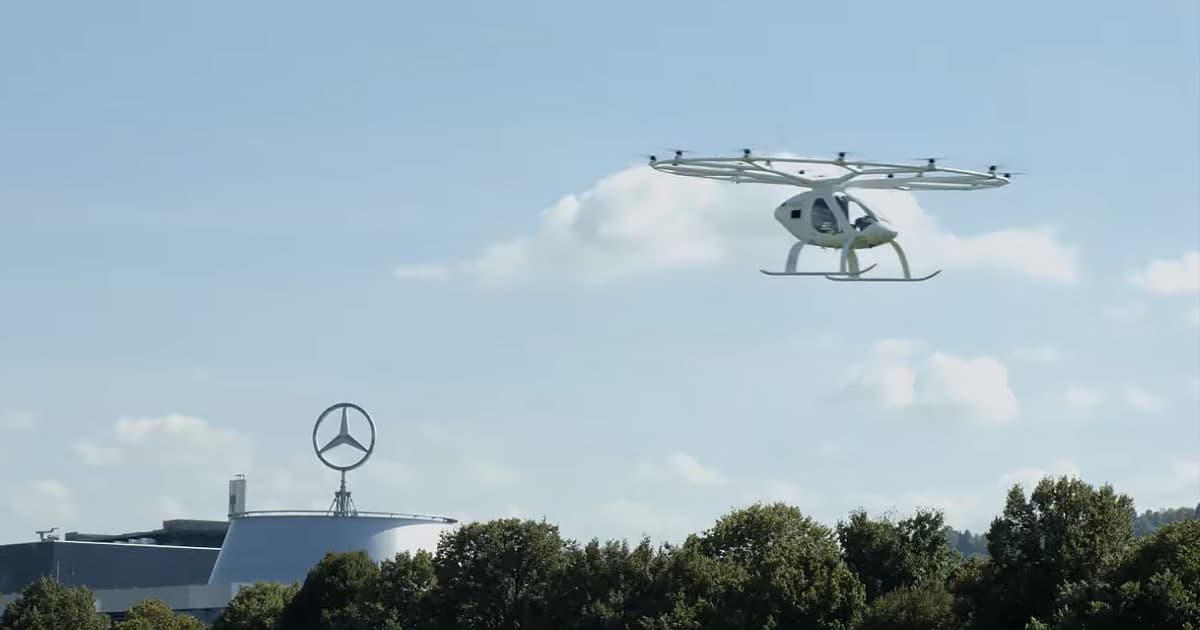 Watch This Flying Taxi Soar Over a German City

This 18-rotor two-seater drone could one day fly you to work.

This 18-rotor two-seater drone could one day fly you to work.

Enough with the renders of futuristic flying taxis — real-life prototypes of flying cars are finally taking to the skies, and we're here for it.

German flying car startup Volocopter just showed off its air taxi taking flight at Stuttgart's Mercedes-Benz Museum. Its remotely-operated flight over a football field near the museum was a striking preview of urban consumer flight.

It's not the very first flight of the aircraft — it's demonstrated its flying capabilities on a number of occasions so far. But it's the first time it's soared over a city, a crucial step toward making an urban flying cab service a reality.

"As Stuttgart has seen today, they fly safely, quietly, and are fast approching the implementation stage," Volocopter CEO Florian Reuter said in a statement.

The news comes after the company's Volocopter 2X, the same two-seater multirotor aircraft, made history by becoming the first flying aircraft of its kind to take off from an international airport in August.

More on Volocopter: Flying Taxi Takes Off from International Airport for the First Time

Netflix and Drive
Mercedes Claims to Have Achieved Level 3 Automation, Beating Tesla
Jan 30
Read More
Formula E
Mercedes-Benz' First All-Electric Racecar Is Equipped Like a Beast
3. 4. 19
Read More
Uber Announces Flying Taxi Research Center In France
5. 24. 18
Read More
+Social+Newsletter
TopicsAbout UsContact Us
Copyright ©, Camden Media Inc All Rights Reserved. See our User Agreement, Privacy Policy and Data Use Policy. The material on this site may not be reproduced, distributed, transmitted, cached or otherwise used, except with prior written permission of Futurism. Articles may contain affiliate links which enable us to share in the revenue of any purchases made.
Fonts by Typekit and Monotype.