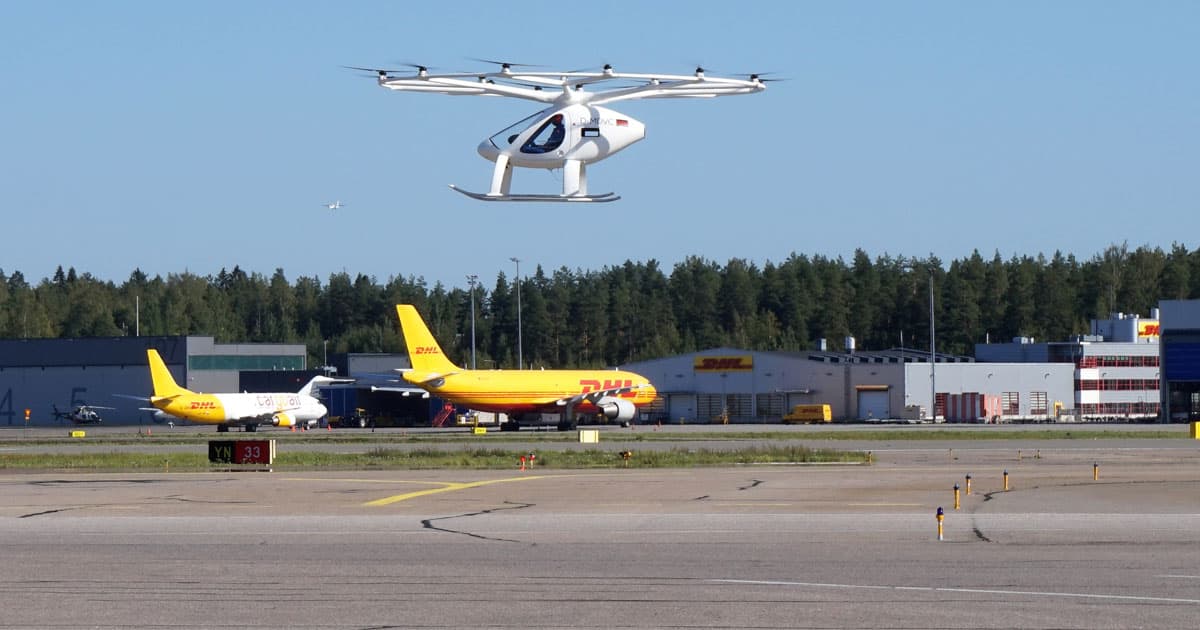 Flying Taxi Takes Off from International Airport for the First Time

It's the first time a flying taxi shared the same airspace as commercial airliners.

It's the first time a flying taxi shared the same airspace as commercial airliners.

Ready for Take Off

A flying taxi just broke the record for being the first of its kind to ever vertically take off at an international airport, while sharing the airspace with numerous commercial aircraft nearby.

The Volocopter 2X, a multirotor aircraft built by German startup Volocopter, took off from the Helsinkin International Airport on Thursday. What set this particular flight apart was the fact that it was fully integrated with the airport's Air Traffic (ATM) and Unmanned Aircraft Traffic Management (UTM) systems.

"The [Golf of Finland] U-space flight trial demonstrated how ATM and UTM can act in combination to enable safe and efficient air taxi operation in urban environments, including airports," read a press release.

The news comes after Volocopter revealed its brand new commercial aircraft design earlier this month, dubbed the VoloCity. The flying car features an impressive 18 rotors with additional stabilizers, allowing it to ferry up to two passengers plus hand luggage at up to 68 mph (110 km/h).

The startup will also be showing off a landing facility in Singapore before the end of the year.

Uber Announces Flying Taxi Research Center In France
5. 24. 18
Read More
Uber Gives Us The First Glimpse Of What It Wants Its Flying Taxi To Look Like
5. 8. 18
Read More
New Zealand May Soon Get a Flying Taxi Service
3. 16. 18
Read More
+Social+Newsletter
TopicsAbout UsContact Us
Copyright ©, Camden Media Inc All Rights Reserved. See our User Agreement, Privacy Policy and Data Use Policy. The material on this site may not be reproduced, distributed, transmitted, cached or otherwise used, except with prior written permission of Futurism. Articles may contain affiliate links which enable us to share in the revenue of any purchases made.
Fonts by Typekit and Monotype.