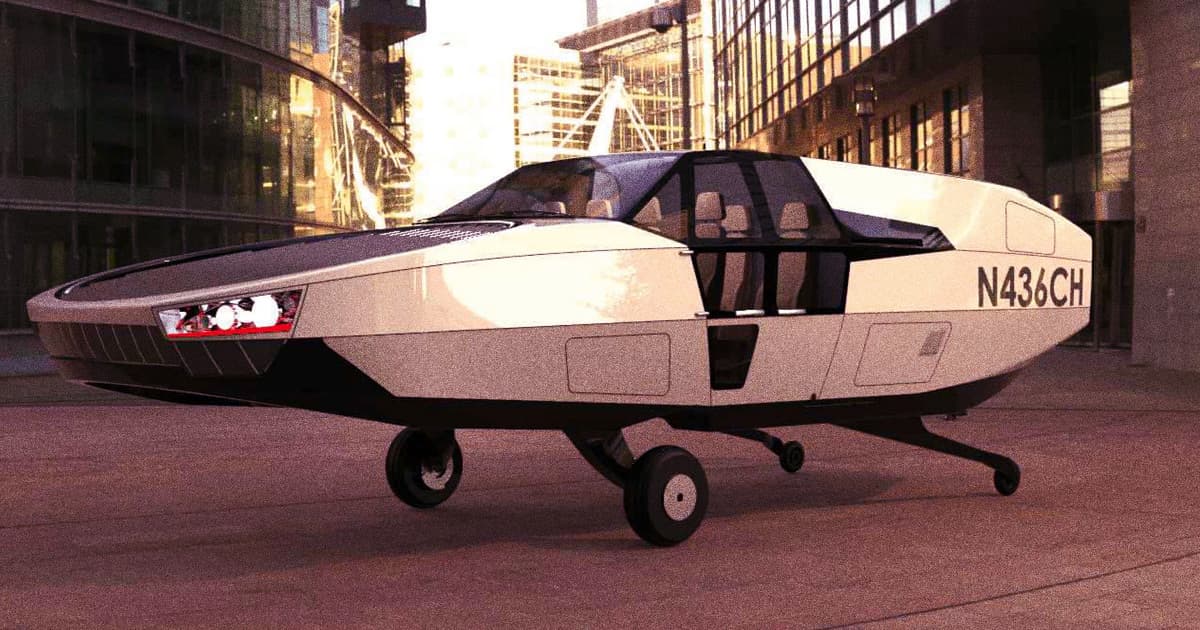 Oh, and it's powered by hyrogen.

Oh, and it's powered by hyrogen.

And the sleek, retro design will look familiar to fans of the DeLorean Motor Company — or anyone who's seen the 1985 time travel blockbuster "Back to the Future," featuring one of the company's vehicles. Also, you know, it flies.

The view of the futuristic vehicle changes substantially depending on your angle.

From the side, the electrical vertical takeoff and landing (eVTOL) vehicle looks like a smoothed-down version of a DMC DeLorean — but from above or below, it's clear that the car's front and rear are taken up by two enormous fans that provide lift. Another apparent DeLorean allusion: though it's unclear whether this version will include it, a previous design even included that vehicle's iconic gull-wing doors.

More on early life: Watch This Flying Taxi Soar Over a German City

Drifting DeLorean
Watch a Self-Driving DeLorean Burn Rubber on a Stunt Course
12. 23. 19
Read More
Green Flying Cars
Study: Flying Cars Could End Up Being Greener Than Electric Cars
4. 30. 19
Read More
Flying Cars May Work Best When Tethered to Power Lines
9. 14. 18
Read More
+Social+Newsletter
TopicsAbout UsContact Us
Copyright ©, Camden Media Inc All Rights Reserved. See our User Agreement, Privacy Policy and Data Use Policy. The material on this site may not be reproduced, distributed, transmitted, cached or otherwise used, except with prior written permission of Futurism. Articles may contain affiliate links which enable us to share in the revenue of any purchases made.
Fonts by Typekit and Monotype.