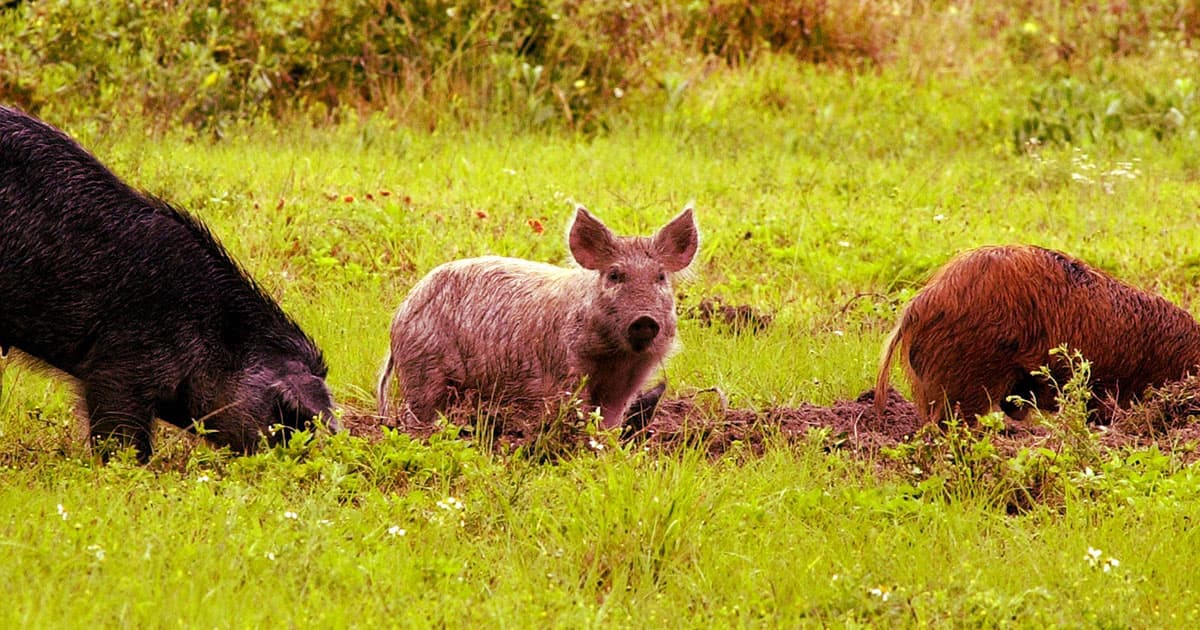 The prophecy made in a 2019 meme has come true. A neighborhood has, indeed, been invaded by dozens of feral hogs, as one Twitter user claimed in response to alt-country singer Jason Isbell's tweet all those months ago.

But don't panic. It wasn't 30-50 feral hogs, and because the porcine invasion happened around midnight in Sienna, Texas, no children were harmed — just landscaping stones. Local CBS station KDFM posted a resident's security cam footage of the late-night incident, which shows a single pig entering the frame, followed by a seemingly endless parade of additional hogs.

The resident said he saw damage to their front yard, including garden beds, as well as more damage down the street in neighbors' yards.

According to Mississippi State University, feral hogs are not native to North America. They were brought in the 1500s by European colonizers, and were later joined by additional Eurasian hog species that have now intermingled, creating different varieties of wild hog in the US.

Wild pigs have been reported in 45 states, and MSU says that pigs' range expansion in the last two decades has largely been because humans have illegally moved them to new areas.

Frustratingly, KDFM's video stated that the best way to control feral hogs is by trapping and killing up to 75 percent of their herd. Not only did humans create this problem, but feral hogs can be dealt with in non-lethal ways. Fencing, keeping guard animals to protect herd and small prey animals and vaccinating animals to prevent disease spread all reduce their harm.

Are the piggies annoying? Yes. Lethal? Rarely, with only five documented deaths since 1825, according to the New York Times.

As invasive species around the country expand in population, we'll need stricter animal trafficking laws — and, you know, to actually enforce them. Otherwise, people are going to keep killing innocent animals, which matters to at least some of us.

More on the new normal: Hurricane-Like Storms that Raged in the Midwest Caused by Climate Change, FEMA Says