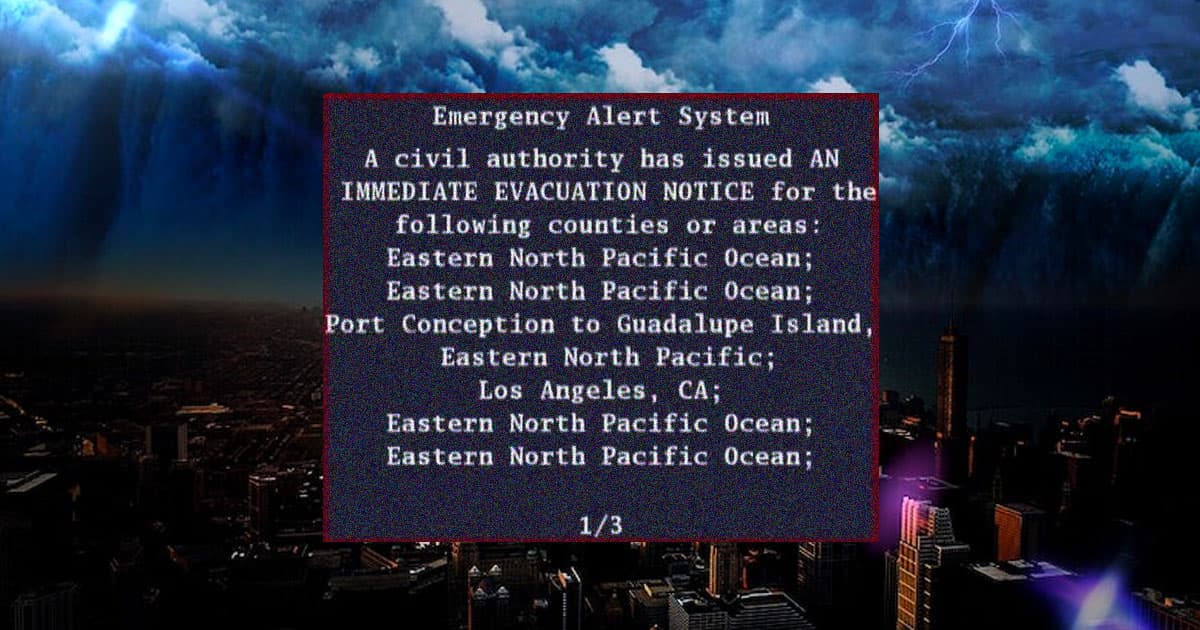 Accidental Emergency Broadcast Says Everyone in Los Angeles Should Evacuate

Police in the Los Angeles area accidentally broadcast an emergency evacuation order for the whole city — and it really freaked out those who saw it.

As Bloomberg reports, local stations in Ventura County erroneously broadcast a scary-looking evacuation alert Wednesday night after a brushfire broke out near the city of angels. But the alert vastly overstated the danger, telling the whole city of LA and several additional areas to evacuate.

The Ventura County Sheriff's Department also tweeted out the alert in English and Spanish, the report notes, before it issued a retraction that blamed its LA County counterparts for the erroneous message.

"The evacuation notice that was received by some Ventura County Residents on television was sent in error by the County of Los Angeles," the VCSO tweet reads. "There is no threat to Ventura County at this time and no need for residents to evacuate."

wtf did anyone else just see this on their cable teevee? pic.twitter.com/AkqUTZ1dwA

Prior to the retraction, folks in LA were understandably freaked out. Some even compared it to a similar incident that happened in Hawaii in 2018 — except in that case, it was a nuclear warning.

"I missed this until this morning," one user tweeted. "Did LA County tell Hawaii, 'Hold my beer?' Oops."

Another user who saw the alert was a bit more graphic.

"Uhh did anyone in LA get an evacuation notice??" they tweeted. "Kinda shitting my pants [right now]."

It remains unclear whether the alert was a drill or a simple fat finger mistake, or whether it's related to the LA region wildfires currently roiling near freeways in the northern part of the city.

But one thing's for certain — some people were ready to recreate "Escape from LA."

Weed-Out Course
University Fires Chem Professor After Students Complain His Course Was Too Hard
Yesterday
Read More
Read the Room
Elon Musk Fans Horrified as He Suggests Ukraine Give in to Putin's Demands
Monday
Read More
Midlife Crisis
Rumors Swirl That Mark Zuckerberg Is Fighting at a UFC Show
Sep 30
Read More
+Social+Newsletter
TopicsAbout UsContact Us
Copyright ©, Camden Media Inc All Rights Reserved. See our User Agreement, Privacy Policy and Data Use Policy. The material on this site may not be reproduced, distributed, transmitted, cached or otherwise used, except with prior written permission of Futurism. Articles may contain affiliate links which enable us to share in the revenue of any purchases made.
Fonts by Typekit and Monotype.