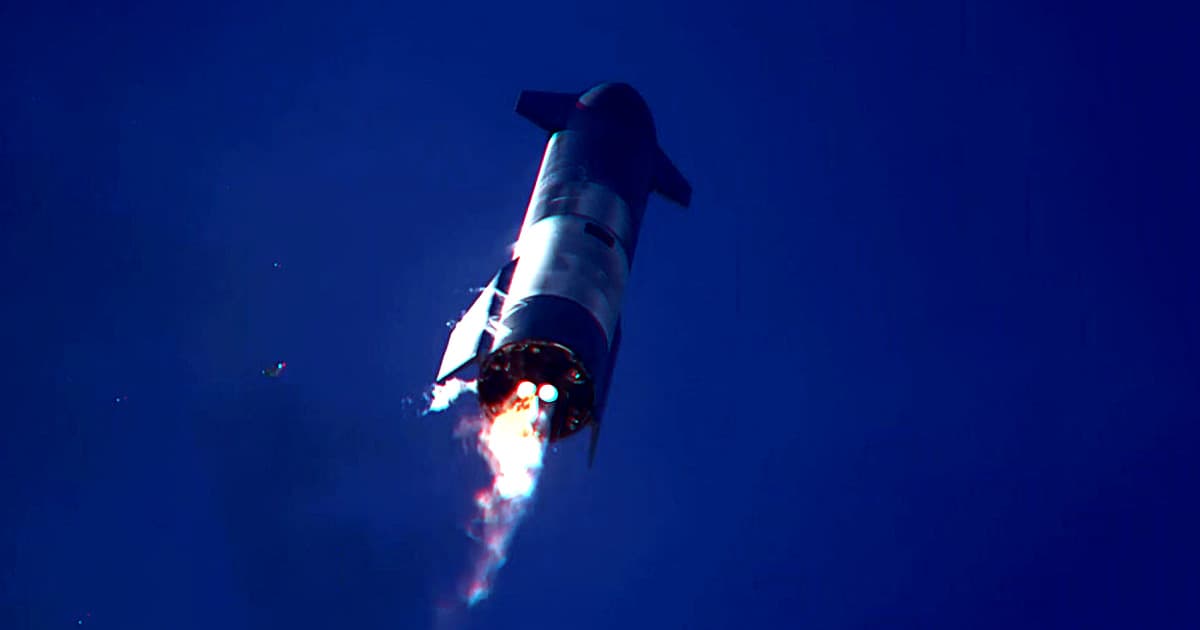 Elon Musk Breaks Silence on Starship Crash: "We Were Too Dumb"

Over the course of just two months, SpaceX hurled two massive stainless steel prototypes of its Starship spacecraft kilometers into the sky — only to have both come crashing down in massive fireballs.

Most recently, Starship prototype SN9 failed to right itself after a daring "belly flop" maneuver on Tuesday, causing it to make impact with the ground at a steep angle, an event lovingly referred to as "rapid unscheduled disassembly."

Building a 160-foot rocket meant to ferry up to 100 passengers to Mars isn't easy — a fact of which SpaceX CEO Elon Musk is painfully aware.

When asked on Twitter "why only light 2 engines for landing" in order to remove any points of failure, Musk said — facetiously, we assume — that "we were too dumb."

Just two days after tweeting that he will be "off Twitter for a while," Musk came crawling back to the social media site last night. His posts were a characteristically messy cascade of memes, sarcastic snarks, and references to the cryptocurrency dogecoin.

The tweets were certainly tongue-in-cheek, but they may have also signaled frustration with the repeated setbacks to the Starship project. Musk has long complained about how difficult it is to build a rocket to establish a city on Mars.

"It's not like they were huge idiots who wanted to throw their rocket away all the time," Musk told Ars Technica's Eric Berger in a 2019 interview, referring to SpaceX engineers trying to make changes to the company's Raptor engine.

But it's a game of high risks and high rewards.

"It would be one of the biggest breakthroughs in the history of humanity," the billionaire added in 2019.

And regardless, it's only a matter of time until SpaceX lines up its SN10 prototype. Perhaps this test launch won't end in a Earth-scorching blast.