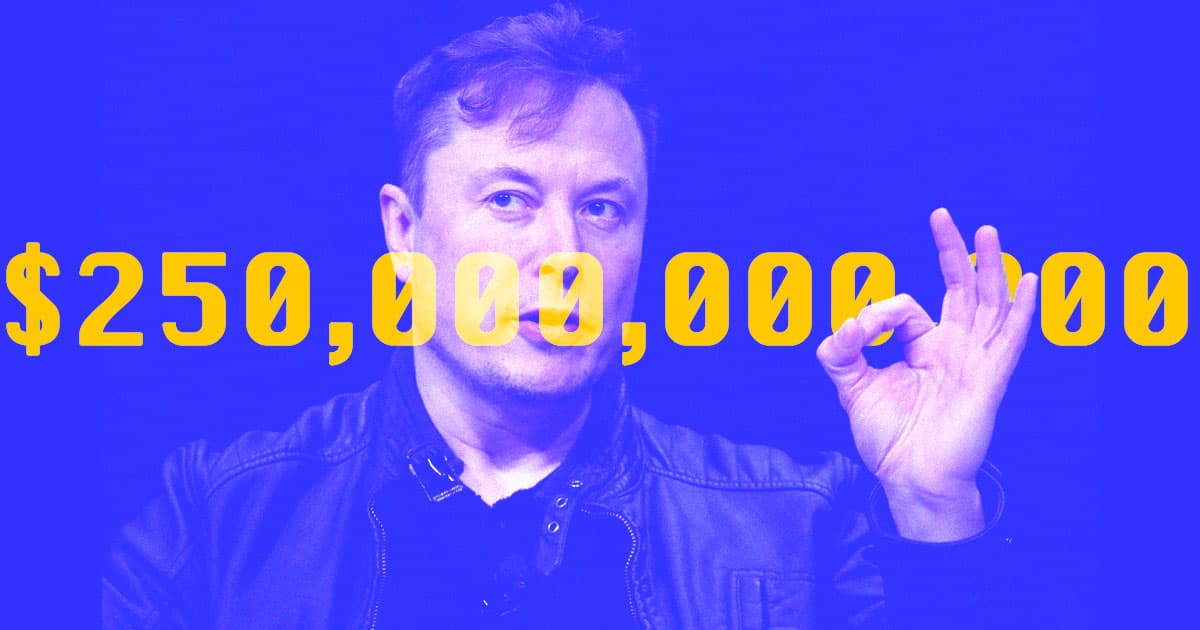 Elon Musk Is Now Worth Over a Quarter Trillion Dollars

As if being a billionaire wasn't enough, Tesla CEO Elon Musk is gunning to seize the title of world's first-ever trillionaire.

The CEO's net worth has now officially grown past a quarter trillion dollars, Bloomberg reports, leaving the second richest person in the world, Amazon founder Jeff Bezos, in the dust.

It's an obscene amount of wealth for a single human being — and it may mean that it's only a matter of time before Musk's net worth hits 13 digits.

The news comes after Tesla's share values rocketed after car rental giant Hertz put in an order for 100,000 Teslas, a massive endeavor to electrify its fleet.

The purchase — the largest for electric vehicles according to Bloomberg — represents about $4.2 billion in revenue. As a result, Tesla shares rose around 6.7 percent on Monday.

When Musk could become a trillionaire is still impossible to tell. If he does, though, it may not be because of Tesla.

"More than one client has told us if Elon Musk were to become the first trillionaire... it won’t be because of Tesla," Morgan Stanley analyst Adam Jonas told The Guardian last week.

"Others have said SpaceX may eventually be the most highly valued company in the world — in any industry."

The space company is making moves to develop the first rocket capable of sending astronauts to the Moon since the Apollo era — a feat that's bound to impress investors.

More on Elon Musk: Could Elon Musk Paint a Giant Picture of His Face on the Moon?

I Silence Thee
Leaked Messages Seem to Show Elon Musk Using Twitter to Punish His Enemies
Jan 28
Read More
Enemy Mine
Elon Musk Now Denies That His Family's Emerald Mine Existed, In Spite of Previously Bragging About It
Jan 9
Read More
Designer Elderly
Experts Worried Elderly Billionaires Will Become Immortal, Compounding Wealth Forever
Jan 4
Read More
+Social+Newsletter
TopicsAbout UsContact Us
Copyright ©, Camden Media Inc All Rights Reserved. See our User Agreement, Privacy Policy and Data Use Policy. The material on this site may not be reproduced, distributed, transmitted, cached or otherwise used, except with prior written permission of Futurism. Articles may contain affiliate links which enable us to share in the revenue of any purchases made.
Fonts by Typekit and Monotype.