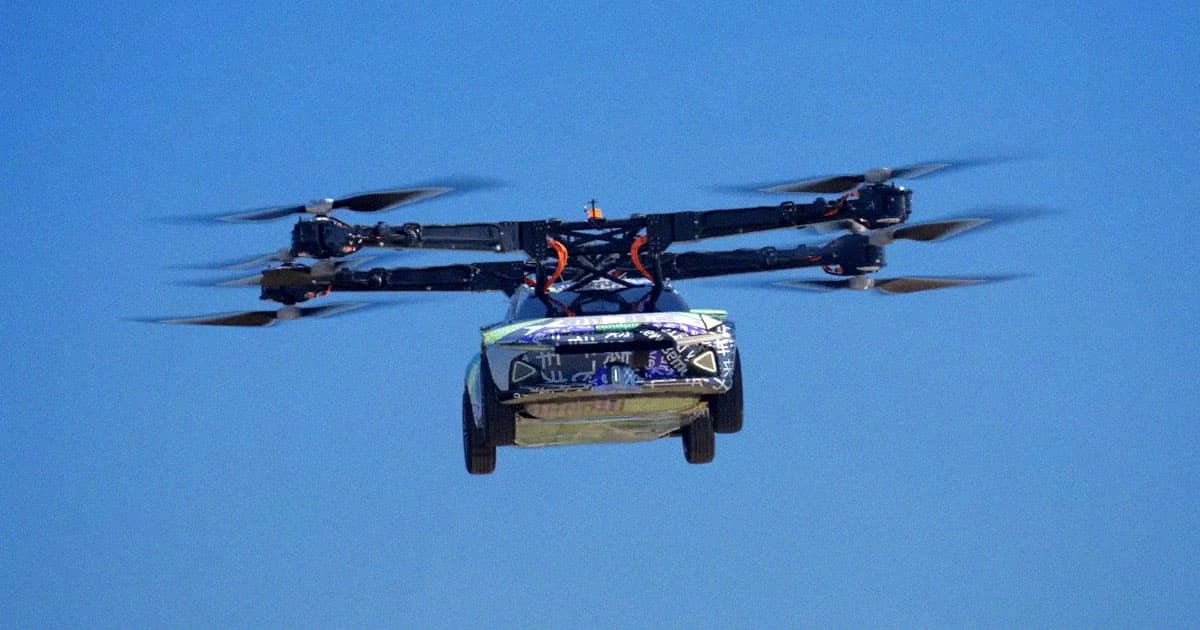 Well, that's one way to get a car airborne.

Well, that's one way to get a car airborne.

There's a lot of flying car prototypes out there, but Xpeng, a Chinese EV automaker and Tesla rival, might have just debuted the most absurd of them all — and it looks like it actually works, too.

That's because the prototype, internally known as X3, basically looks like a regular car, except with a huge version of the rotors you'd see on a commercial drone, giving the peculiar impression of a giant toy.

In a video of the strange vehicle's maiden flight, the X3 gradually lifts itself off the ground and hovers at a height of over 30 feet. Once it stabilized, the X3 slowly flies forward and even manages to turn around and return to its starting point, where it lands smoothly.

According to the video, the X3 weighs nearly 4,300 pounds — a lot of that probably battery weight — so getting this absolute brick to fly at all is an admirable achievement.

Its design is, needless to say, eccentric. And while it may not be elegant, it's definitely airworthy, if the company's demonstration is anything to go off.

The car's body is unusually long, likely to accommodate the massive rotors and entailing hardware, but it makes the X3 kind of look like a bastardized Chinook helicopter.

Since the rotors are meant to be retractable, according to Insider, the X3 is — in theory — roadworthy as well, which is not the case for most flying cars, which care about the flying and are only called cars as a useful analogue.

As impressive as it may be, Xpeng's prototype is not quite at the level of the Jetsons yet. Considering the windows are covered over or blacked out, it doesn't look like there's room for a driver, and it's unclear how much of its long interior is filled with hardware.

Entertainingly, this isn't even the company's only flying car. Last month, Xpeng debuted its X2 prototype in Dubai, which is less of a traditional car than the X3 and looks more nimble in the air thanks to its smaller, plane-like form.

Air Ferry
Paris Will Use Electric Flying Cars to Get Passengers to the Olympics
11. 27. 21
Read More
Real American eMuscle
Dodge Says It's Only Making an Electric Car Because the Performance Is So Good
7. 8. 21
Read More
Green Flying Cars
Study: Flying Cars Could End Up Being Greener Than Electric Cars
4. 30. 19
Read More
+Social+Newsletter
TopicsAbout UsContact Us
Copyright ©, Camden Media Inc All Rights Reserved. See our User Agreement, Privacy Policy and Data Use Policy. The material on this site may not be reproduced, distributed, transmitted, cached or otherwise used, except with prior written permission of Futurism. Articles may contain affiliate links which enable us to share in the revenue of any purchases made.
Fonts by Typekit and Monotype.