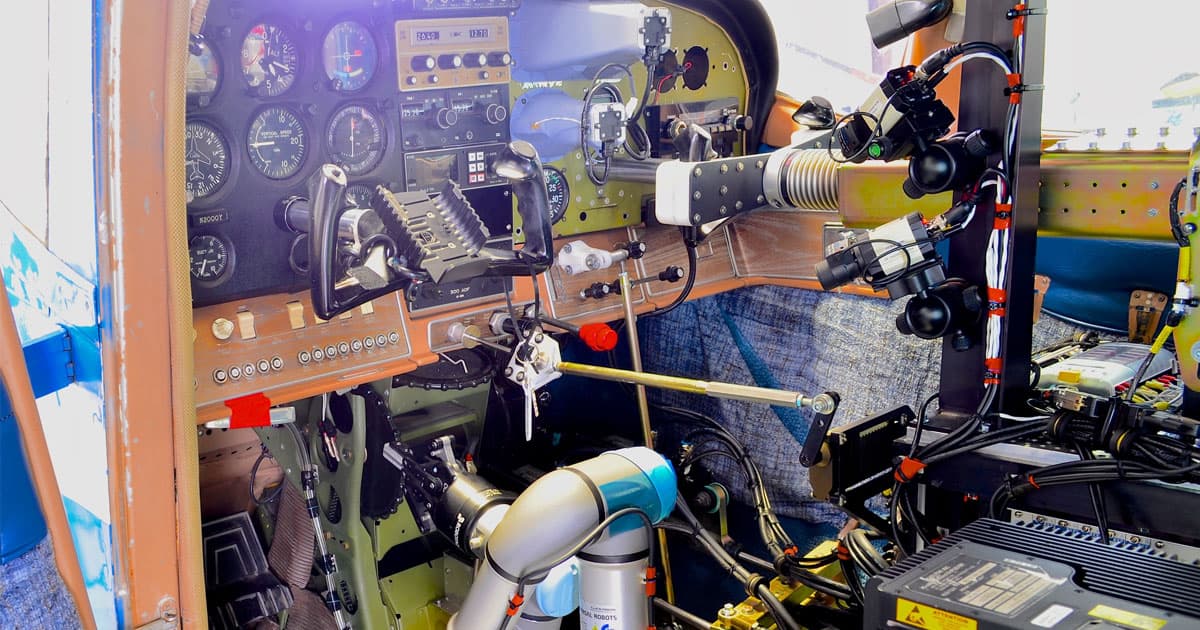 Instead of New Drones, the Air Force Built a Plane-Piloting Robot

The Air Force is stretching the definition of "autonomous" vehicles.

The Air Force is stretching the definition of "autonomous" vehicles.

Forget drones — the U.S. Air Force is turning existing planes into autonomous vehicles by putting robot pilots in the cockpit.

The robot, built as part of a collaboration between the Air Force Research Laboratory and DZYNE Technologies Incorporated, can operate a plane's yoke and throttle while operating various pedals and other controls, just like human pilots do, according to Gizmodo. The robot successfully completed a two-hour test flight earlier this month, according to an Air Force press release, suggesting that technically-autonomous planes could arrive in the near future.

The robot pilot, which looks more like a heap of assorted machinery than the not-so-friendly robot taxi driver from "Total Recall" will still need to log hundreds more hours of flight time before it can be considered ready for military deployment, Gizmodo reports.

But the fact that it's already of taking off, flying, and landing without human assistance is a surprisingly positive sign for the future of pilotless air travel.

And even if the Air Force decides to pivot back to humanity, ROBOpilot can be taken out of the cockpit just as readily as it was put in, making room for a flesh and blood pilot to take over again, according to the press release. At no point in time is the plane itself modified.

"ROBOpilot offers the benefits of unmanned operations without the complexity and upfront cost associated with the development of new unmanned vehicles," Air Force senior scientist Alok Das said in the press release.

READ MORE: The Air Force's New Robot Can Fly Any Plane and Turn It Into an Autonomous Drone [Gizmodo]