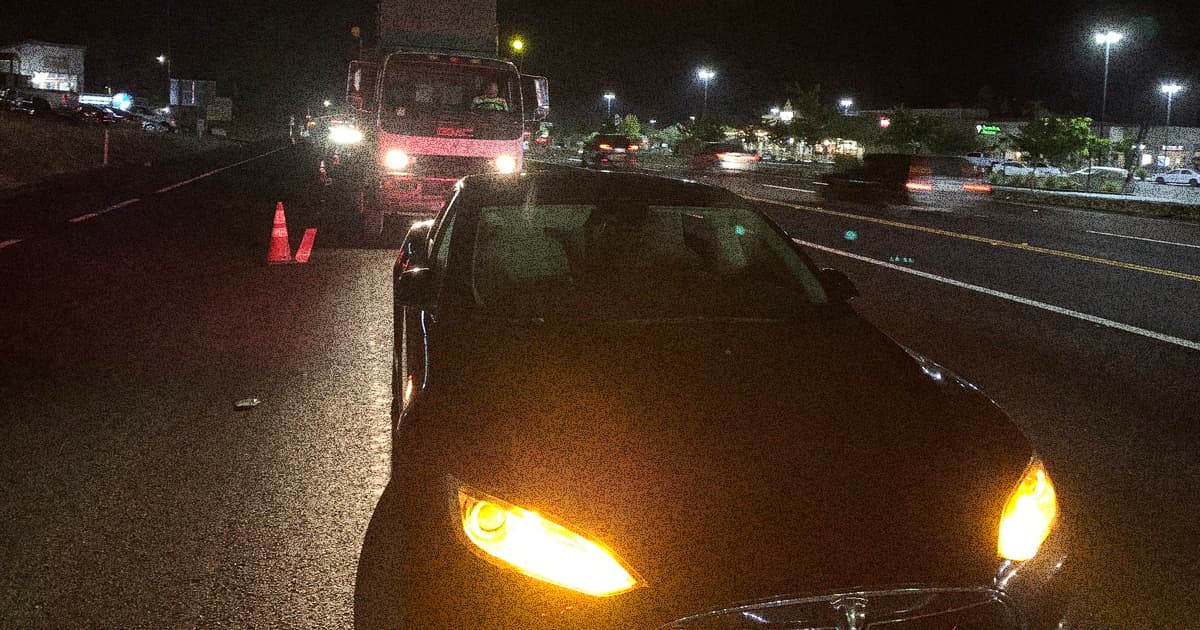 Driver Claims Tesla Locked Up in Middle of Six-Lane Highway

"The joys of living on the bleeding edge."

"The joys of living on the bleeding edge."

A bizarre failure brought a Tesla to a complete stop in the middle of traffic, according to the driver's account of the incident.

Alan "Pooch" Puccinelli, owner of 3D printing supply company called R3PKORD, tweeted the harrowing saga of how his Tesla Model S locked up in the middle of a six-lane highway in North Auburn, California on Wednesday night. Thankfully, Puccinelli managed to avoid an accident after flagging down a road maintenance team to set up flares and calling a tow truck, but the incident represents yet another alarming story of increasingly computer-dependent vehicles creating unexpected and serious hazards.

The joys of living on the bleeding edge- a thread:

On the way to dinner tonight my @Tesla literally locked up IN THE MIDDLE OF THE HIGHWAY! A message Ive never seen before popped up saying "Vehicle May Not Restart: Service required"

Puccinelli tweeted that he first saw an alert pop up that read "Service is required. Pull over safely." At the time, his car estimated that it had enough battery power to travel another 160 miles.

But immediately after, the Model S went haywire and blared a warning about having run out of power. At that point, Puccinelli says the car came to a halt in the middle of the highway and locked up completely. According to Puccinelli, the car wouldn't start and he didn't have any way to manually override the brakes or switch it into to neutral so that he could push it to the shoulder.

...no sooner do I have that thought than the car starts beeping madly saying "pull over immediately! Insufficient power" and then everything just locks up. No ability to shift to neutral. No releasing parking break/ emergency override. car is bricked in the middle of a 6 lane hwy pic.twitter.com/pXsGMLb39k

Puccinelli eventually got a Tesla support agency over the company's roadside text chat assistance who called for a tow truck, and that's about where the story ends for now. It's still not apparent exactly why the Tesla broke down, though Puccinelli later speculated that it seemed like something caused it to rapidly lose power.

Regardless, it's an alarming albeit unusual story that calls into question how safe highly connected electric vehicles really are, especially in edge conditions. Just like the cars' electronic door handles that reportedly locked up after a crash or the myriad errors made by Tesla's Autopilot system, the sudden shutdown represents the immense difficulty of breaking new ground in automotive technology.