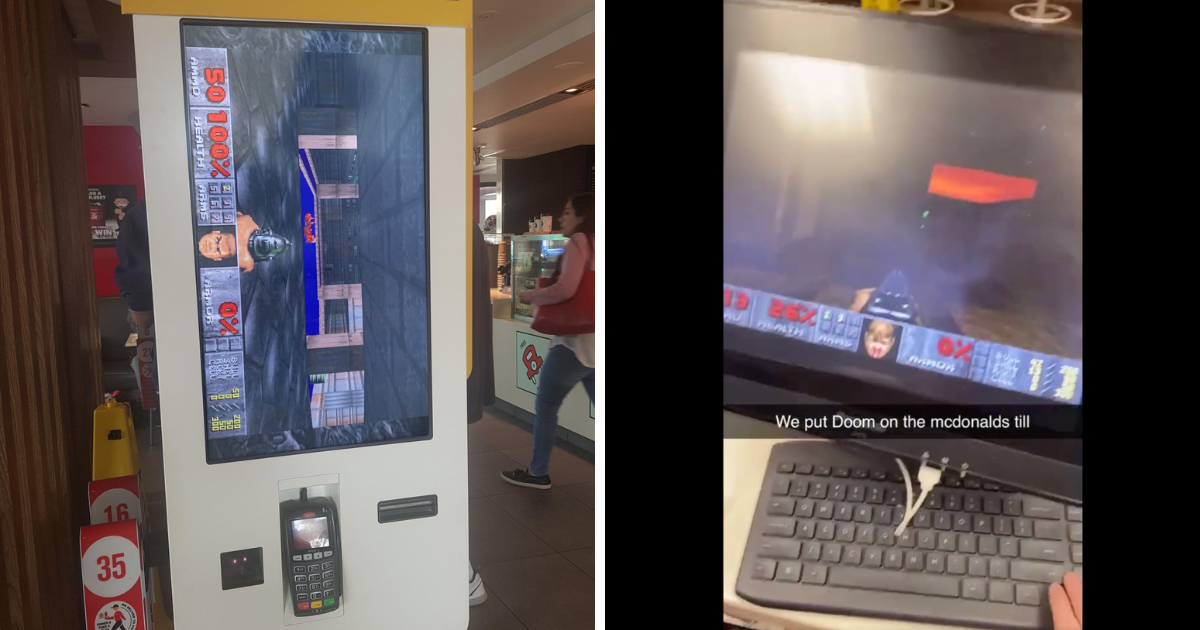 Sorry Folks, That Photo of Doom Running on a McDonald's Kiosk Is Fake

A few Doom fans spotted something wrong with a viral photo that supposedly showed the 1993 classic running on a McDonald's ordering kiosk. Bad news, folks: turns out it's almost certainly a fake.

The saga started with a Thursday tweet in which a pseudonymous user posted a shot of an apparently hacked touchscreen kiosk at the fast food chain. The user claimed somebody had installed Doom using the old-school keypad on a small device plugged into the screen at the bottom, show below.

yo who tf installed doom on the mcdonalds kiosk 😭 pic.twitter.com/HzxlnjmlRm

The pic got so much attention it ended up in PC Gamer yesterday, but an astute observer pointed out in the original tweet thread that the photo is very likely edited.

"This is a fake Photoshop," the user said Thursday, posting the supposed original image from an old Reddit thread. The pic shows the same kiosk with the same people walking in the background, but this time with a "blue screen of death" instead of Doom.

Doom fans don't have to mourn for long, though, because players have love getting the game to run in places it really doesn't belong. In fact, the fact-checking thread itself features a video that would much harder to fake.

"Former McDonalds manager here," one user replied, fulfilling everyone's great need to see Doom on a fast food screen. "This is something I actually did back in 2020 on one of the McDonald’s tills on the front counter."

The video, shown below, sure enough features the demon-blasting shooter on a cashier's till. The fake might've been disappointing but the short clip satisfied our hunger — and we're lovin' it.

Former McDonalds manager here. This is something I actually did back in 2020 on one of the McDonald’s tills on the front counter. pic.twitter.com/5p4g9IrjRi

Ice Cream Dreams
McDonald's Sued by Ice Cream Hackers for $900 Million
Mar 4
Read More
Bitcoin & Clyde
Feds Arrest Crypto CEO for Bitcoin Laundering, But Her Real Crime Was Against Rap Music
Feb 8
Read More
Anernermous
Elon Musk Mocks "Anonymous" For Threatening Him
6. 8. 21
Read More
+Social+Newsletter
TopicsAbout UsContact Us
Copyright ©, Camden Media Inc All Rights Reserved. See our User Agreement, Privacy Policy and Data Use Policy. The material on this site may not be reproduced, distributed, transmitted, cached or otherwise used, except with prior written permission of Futurism. Articles may contain affiliate links which enable us to share in the revenue of any purchases made.
Fonts by Typekit and Monotype.