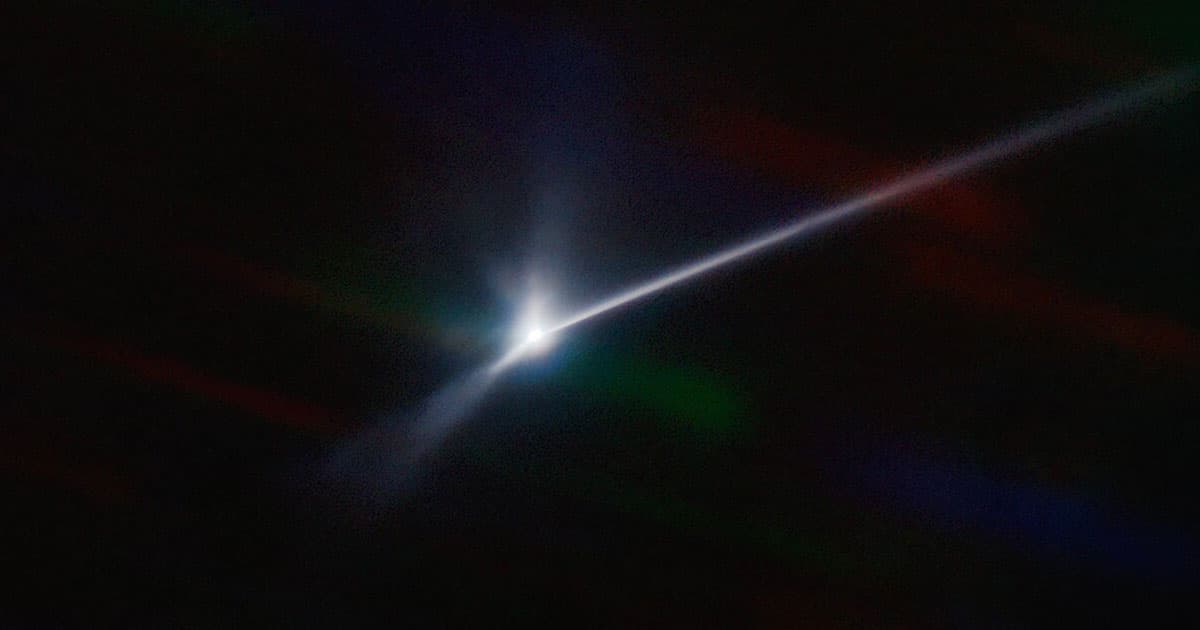 These images are unreal.

These images are unreal.

NASA recently bashed its Double Asteroid Redirection Test (DART) spacecraft into a tiny asteroid moonlet called Dimorphos to see if it could alter the trajectory of a dangerous asteroid before it hit Earth, not unlike a cosmic game of billiards.

The powerful collision created a massive cloud of space debris, which was captured by both ground- and space-based observatories — and the resulting images are absolutely breathtaking.

Now, a newly-released image taken by a team of researchers using the Southern Astrophysical Research (SOAR) Telescope in Chile shows a massive trail of debris emanating from what's left of Dimorphos.

According to the astronomers' calculations, the resulting comet-like tail stretches a whopping 6,000 miles from end to end.

"It is amazing how clearly we were able to capture the structure and extent of the aftermath in the days following the impact," said Teddy Kareta, astronomer at the Lowell Observatory in Arizona, who produced the new image, in a statement.

SOAR was one of several observatories that were able to witness the aftermath of NASA's groundbreaking mission.

The Light Italian CubeSat for Imaging of Asteroids (LICIACube) was also able to capture images of the moonlet mere minutes after its collision with NASA's approximately 1,345-pound spacecraft. The black-and-white images show a large dusty plume after the impact.

Here are the first images taken by #LICIACube of #DARTmission impact on asteroid #Dimorphos.
Now weeks and months of hard work are now starting for scientists and technicians involved in this mission, so stay tuned because we will have a lot to tell! pic.twitter.com/kVz1WmcsL7

Both the Hubble and James Webb space telescopes were also trained on the location so they could watch DART smash into the space rock, showing up as bright flashes in series of images.

"For the first time, Webb and Hubble have simultaneously captured imagery from the same target in the cosmos: an asteroid that was impacted by a spacecraft after a seven-million-mile journey," NASA Administrator Bill Nelson said in a statement last week.

All of these images now set the stage for scientists to study the kinetics involved in such a dramatic collision.

"From this one impact event, we can learn more about the mechanics of impacts into small bodies, momentum transfer and the ability to use artificial impactors to nudge asteroids out of their orbits," said planetary scientist Katarina Miljkovic.