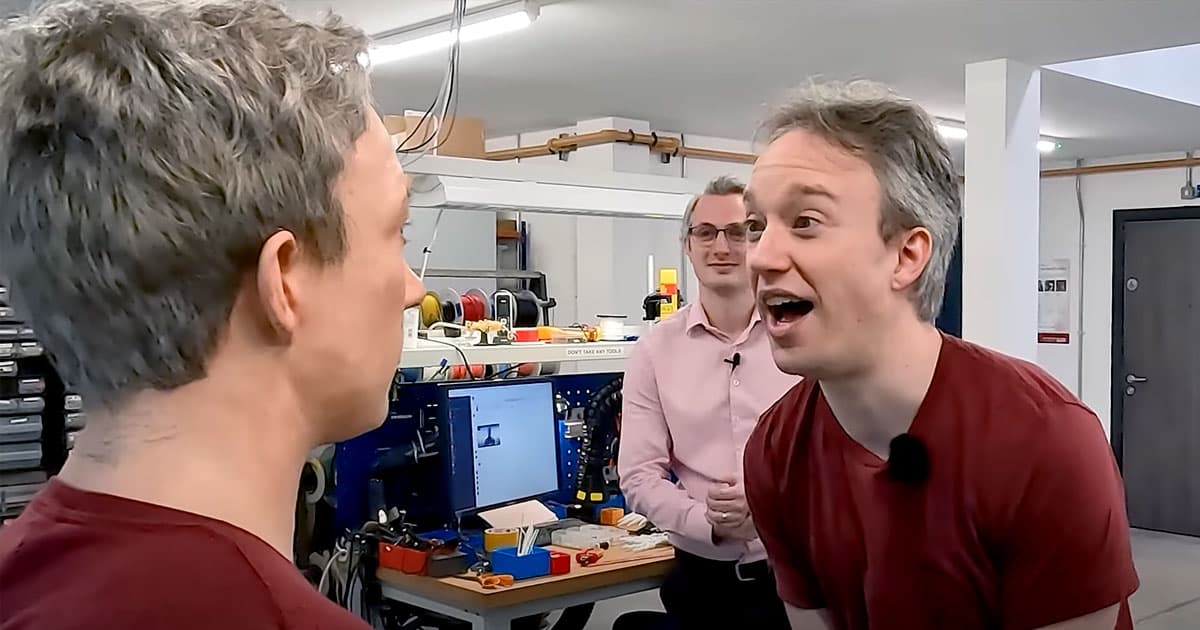 YouTuber Meets His Creepy Robot Double and Freaks Out

You know what they say about meeting yourself.

You know what they say about meeting yourself.

Ever wanted to meet your doppelgänger? For an unspecified large sum of money, you can have one made — if you dare.

British vlogger Tom Scott, known for initially being sponsored by VPN companies only to declare in a 2019 video that many of the companies are lying to customers , decided that his robot double could shill for yet another VPN company much better than he could.

To achieve that end, he looked to Engineered Arts, the robotics company also located on the soggy British isles who made the freakily lifelike Ameca robot whose facial expressions are, as company representative Morgan Roe admits in the video, absolute "uncanny valley" fodder.

In classic vlogger style, Scott took viewers on a journey to EA's facilities in the south of England, where he had cameras follow him as he met his doppelgänger for the first time... and let's just say it left him speechless.

As Roe notes while Scott veritably freaks out as he gazes upon the robot version of himself directly in the face, it's particularly uncanny for the vlogger because what he's seeing isn't a mirrored version of himself, but rather, a replica of his face head-on, the way we see other people.

At one point, Scott declares that when making eye contact with the him-bot, his brain registered it as a person for a split second — an admission that is, admittedly, pretty fascinating.

Scott didn't disclose whether he paid to commission his robot double, which is head and shoulders only, though he did say in the comments of the video that it was later "fully decommissioned."

It's neither that infamous "sex with Google Glass" app nor what is perhaps the best "30 Rock" sketch ever written about meeting other versions of one's self, but it's still pretty gnarly — and if humanoid robots are the future, it may be an experience we all, eventually, share.

More on creepy robots: Scientists Built a Robot With Jetpacks and a Creepy, Doll-Like Face

Looking Ruff
This Boston Dynamics-Esque Bot Has Horrifying, Human-Like Eyes
8. 15. 19
Read More
The University of Tokyo Has Built a Robot That Sweats While Exercising
12. 22. 17
Read More
Boston Dynamics' Bipedal Robot Can Now Do a Backflip
11. 17. 17
Read More
+Social+Newsletter
TopicsAbout UsContact Us
Copyright ©, Camden Media Inc All Rights Reserved. See our User Agreement, Privacy Policy and Data Use Policy. The material on this site may not be reproduced, distributed, transmitted, cached or otherwise used, except with prior written permission of Futurism. Fonts by Typekit and Monotype.