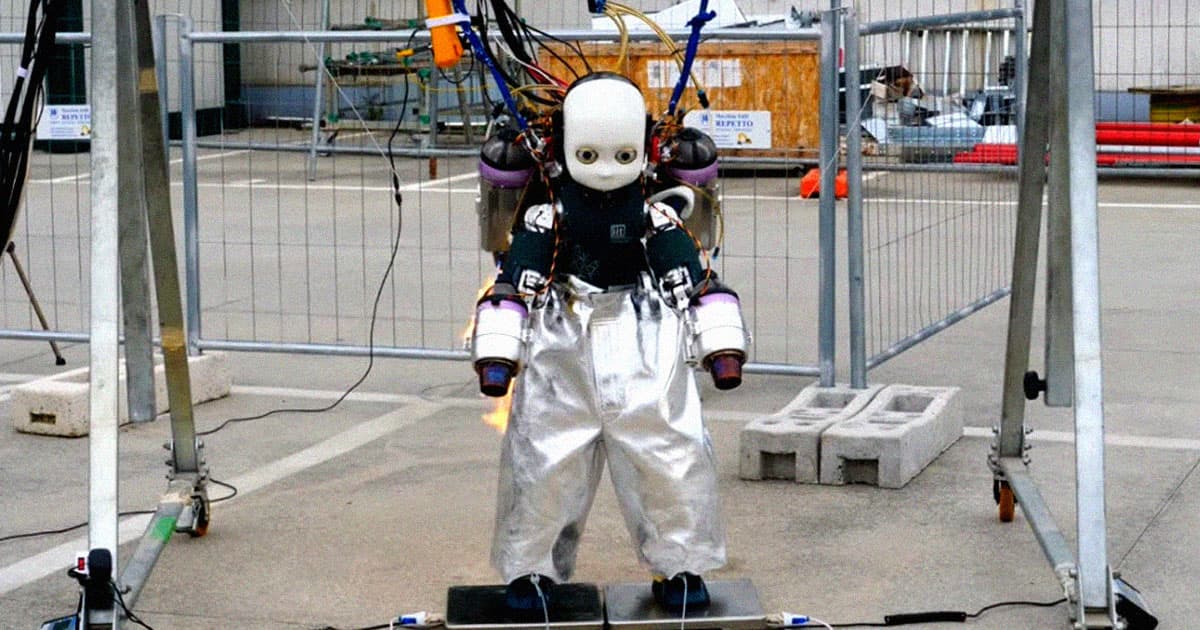 Be Nice to It

Scientists Built a Robot With Jetpacks and a Creepy, Doll-Like Face

Well, that's straight out of a nightmare.

Well, that's straight out of a nightmare.

A team of researchers from the Italian Institute of Technology (IIT) have created a jetpack-wearing humanoid robot — and it has a creepy, doll-like face for some reason.

In other words, it's the last kind of creature we'd want to encounter during the singularity.

The nightmarish monstrosity, called iRonCub (iCub Equipped with Jet Engines), as detailed in a paper recently accepted for publication in the journal IEEE Robotics and Automation Letters, has two jet engines attached to the ends of each of its arms, and another two attached to its backpack.

It may look terrifying, but the researchers propose the creepy jetpack doll could one day be used to overcome otherwise impassable terrain and help during disaster response. A charming video render shows the robot doing just that, effortlessly blasting off over some rubble.

In a real-world test — which, it must be said, is basically a scene straight out of a horror sci-fi movie — the researchers put some shiny protective pants on the jetpack doll and let the four jet engines rip. While the robot wasn't able to hover, two scales it was standing on during the test were able to inform the researchers of the changes in the robot's weight.

But as opposed to a simple drone, a humanoid robot could potentially lend a literal hand while still being able to cover otherwise hard-to-traverse ground with its handy jetpack.

Pucci also told IEEE Spectrum that their research can also be used as a "test-bed for actuated flying exoskeletons for human beings."

Now, the team is hoping to get their doll-faced monstrosity into the air for real. So get ready to run.

Quacks Like a Duck
Watching Elon Musk's Robot Back to Back With Boston Dynamics Is... Something
10. 4. 22
Read More
Diner Drama
People Furious at Robot Serving Pancakes at Denny's
11. 28. 21
Read More
Tesla Bots Roll Out
Elon Musk Just Announced a Humanoid "Tesla Bot"
8. 20. 21
Read More
+Social+Newsletter
TopicsAbout UsContact Us
Copyright ©, Camden Media Inc All Rights Reserved. See our User Agreement, Privacy Policy and Data Use Policy. The material on this site may not be reproduced, distributed, transmitted, cached or otherwise used, except with prior written permission of Futurism. Articles may contain affiliate links which enable us to share in the revenue of any purchases made.
Fonts by Typekit and Monotype.