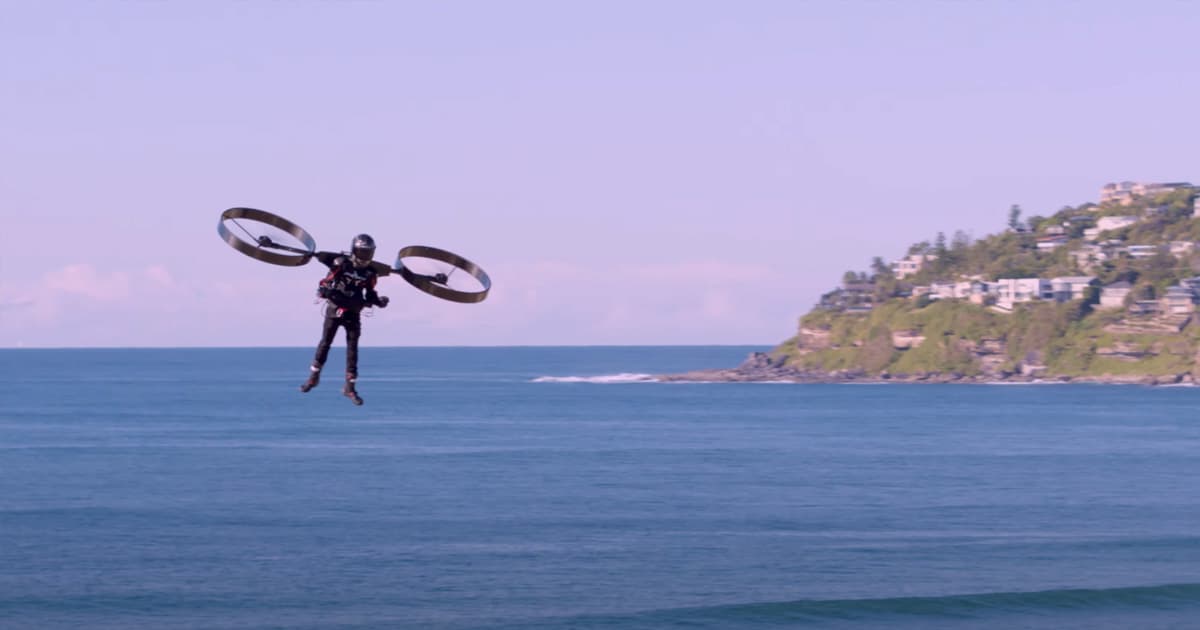 Watch a Man Soar Into the Sky With a Helicopter Backpack

The future of personal flight or a safety hazard?

The future of personal flight or a safety hazard?

A new video shows a daring pilot take off using what amounts to be a backpack helicopter — a futuristic blend of a jetpack and drone.

The contraption is called CopterPack, and was created by an Australian startup of the same name.

The video shows a pilot effortlessly taking to the skies on a beach, twisting and turning over a body of water.

Is it a glimpse into the future of personal flight? We're not entirely convinced, given the obvious safety concerns — but it sure looks like a whole lotta fun.

It's a daring stunt, considering the two giant rotors are spinning at extremely high speeds just inches from the pilot's neck — and they don't appear to have any netting to ensure the wearer won't have any appendages chopped off.

By rotating back and forth on a central axle, the pilot is able to twist and turn in the sky, adjusting his flight path.

In fact, according to the company's website, the "electric backpack helicopter" has a "self-leveling autopilot."

The backpack also weighs very little, according to the company, as its frame is "constructed from carbon fiber honeycomb."

But that's pretty much all we know about the CopterPack. We still don't know how far it can fly, or what its battery capacity is — or, for that matter, even how the company is planning to ensure the pilot won't be decapitated.

Personal Aviation
Inventor Says He's Built a Real Life Flying Motorcycle
May 6
Read More
Bumper Drones
Cargo Drones Have One Problem: Not Crashing Into Things
3. 28. 19
Read More
Tiltrotor Down
A "Tiltrotor" Helicopter May Replace the Army's Black Hawk
2. 21. 19
Read More
+Social+Newsletter
TopicsAbout UsContact Us
Copyright ©, Camden Media Inc All Rights Reserved. See our User Agreement, Privacy Policy and Data Use Policy. The material on this site may not be reproduced, distributed, transmitted, cached or otherwise used, except with prior written permission of Futurism. Articles may contain affiliate links which enable us to share in the revenue of any purchases made.
Fonts by Typekit and Monotype.