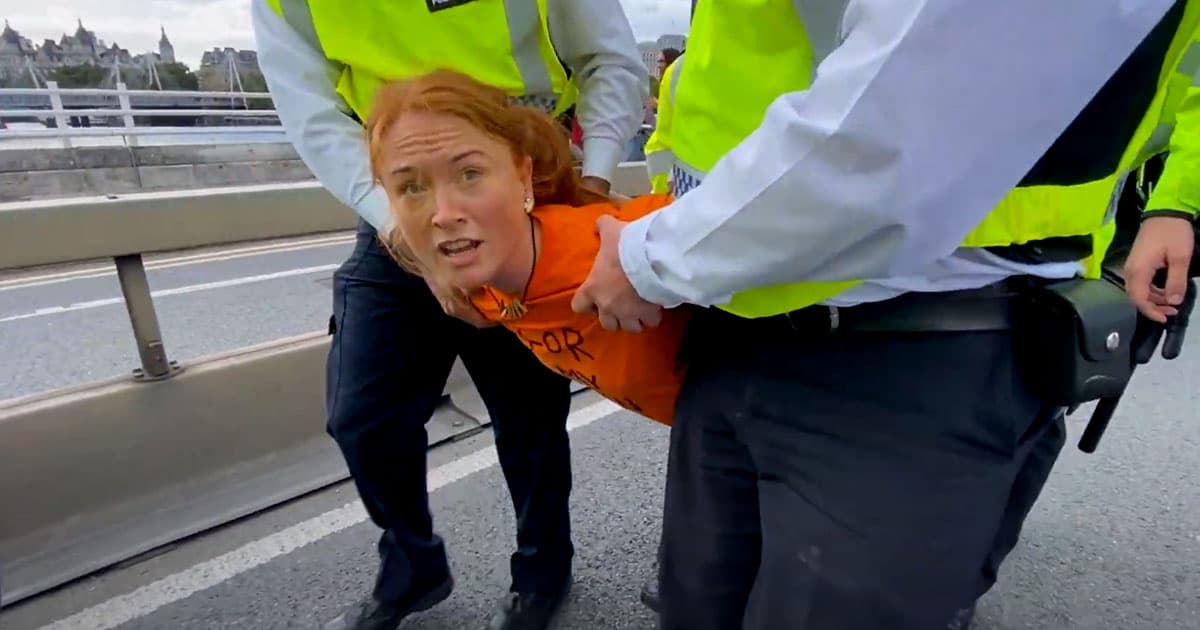 Climate Activist Conducts Interview While Being Carried Away by Police

Talk about commitment to the cause.

Talk about commitment to the cause.

There's multitasking, and then there's what happened on London's Waterloo Bridge, where a climate activist gave an interview while quite literally being toted away by three burly police officers during a protest.

"I'm doing this for my son," the woman, identified only as "Lora" by the organization she was protesting with, told cameraperson Zoe Broughton in a brief, now-viral clip that has at press time racked up more than 11 million views on Twitter.

"The government's inaction on climate change is a death sentence for us all," the woman continued, adding that Britain's new prime minister, Liz Truss, has said she wants to issue up to 130 new oil drilling licenses in spite of United Nations warnings that oil drilling must cease if we are to stave off the worst effects of global climate change.

As Broughton notes, the activist was protesting on the famous London footbridge with Just Stop Oil, a UK-based climate action group known for its bright orange shirts and propensity to get its acolytes arrested and subsequently bashed in the Daily Mail tabloid, which called this week's protesters, dozens of which were detained by London police,' "eco zealots."

Though it appears that the protesters arrested at JSO actions are by and large unharmed by British police during their arrests, the same can't be said for others who share their commitment to environmentalism.

As the Global Witness non-governmental organization revealed last week in a shocking report about the state of climate activism, more than 1,700 environmental protesters have been killed over the last decade — an average of two per day for the last 10 years, the briefing notes.

Most of those activists, Global Witness adds, lived in either Colombia or Brazil, and roughly two-thirds of them were indigenous. The organization added that the official tallies of deaths likely underrepresent the true scale of violence done to climate activists.

Be it getting arrested in front of cameras in London or killed in South America, it's clear that climate activism comes with a lion's share of sacrifice and danger — but then again, the future they're fighting to avert will likely be much worse.