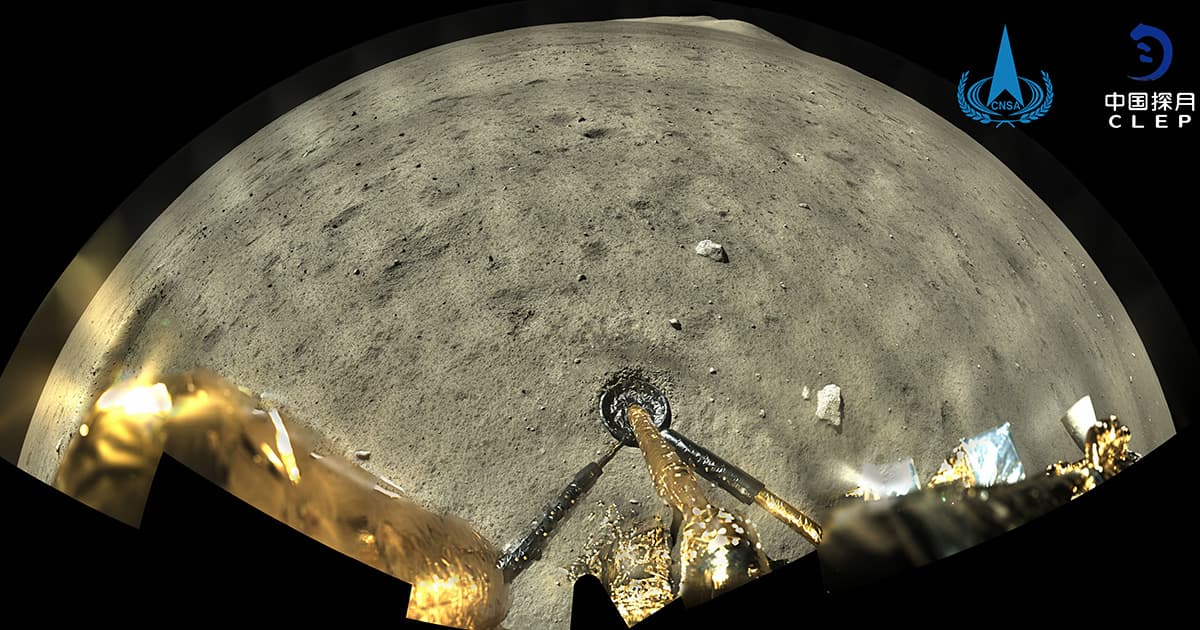 Chinese Lander Sends Back Color Pictures of the Moon

Wait, isn't the Moon supposed to be gray?

Wait, isn't the Moon supposed to be gray?

China's lunar lander Chang'e-5 just beamed back color photos of the surface of the Moon — and they're a lot more, well, beige than what you'd expect.

The spacecraft landed on the near side of the Moon earlier this week. Just hours after touchdown, the lander jumped into action, scooping up lunar soil to bring back home.

It also took the opportunity to photograph its surroundings and send back incredible images, which were later stitched together into a gorgeous color panorama that will challenge your preconceptions about the Moon's hue.

The Moon's surface isn't actually the dingy grayscale seen in Apollo-era photographs. Images taken by the cameras on board NASA's Lunar Reconnaissance Orbiter have shown a bluish tint in the past, and color composites made up of satellite images show a slightly red tint.

The surface's appearance can change drastically depending on how the Sun shines upon it. Accounts from Apollo astronauts described a number of different colors, from "chocolate brown" on the day side to "pale blue" on the night side, as Air & Space magazine reported back in 2009.

And that's without getting into how cameras, and the technology used to process their images, can affect our perception of lunar images.

The image also shows the lander's landing feet dug into the soft, sand-like material in the Oceanus Procellarum region, a vast plain on the western edge of the near side of the Moon.

The geological features in the area are thought to be billions of years younger than the sites where the lunar samples were collected throughout NASA's Apollo missions in the 1970s.

On Wednesday, officials also released footage of the lander touching down, showing the small craft zooming over countless craters of various sizes.

An ascent vehicle attached to the top of Chang'e-5 will deliver the lunar samples collected by the lander back into lunar orbit in the following days. The vehicle is expected to make its way back to Earth with samples in tow some time in mid-December.

More on the lander: China Releases Footage of Lander Touching Down on Lunar Surface