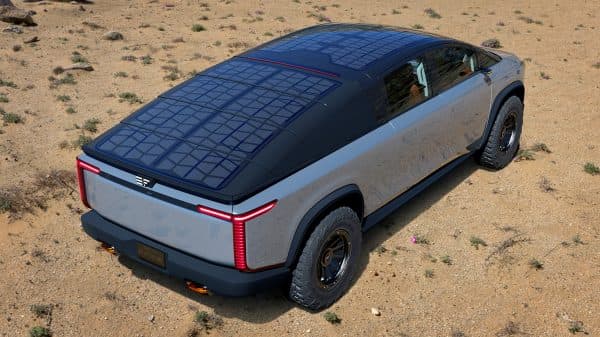 Imitation is the greatest form of flattery.

Imitation is the greatest form of flattery.

It might make you do a double take, but you're not seeing double — the new electric pickup concept created by Chinese electric car startup EdisonFuture just looks a lot like Tesla's Cybertruck.

The electric and solar truck debuted this week at the Los Angeles Auto Show, according to AutoWeek, and it's dubbed the EF1-T. And yeah, we gotta just say it: it has a very similar shape to Tesla's Cybertruck, which is set to come out next year. It's basically a clone, with one notable difference: it includes a solar array that charges the truck in the Sun, adding what the company says can amount to 35 miles per day in range.

It's hard to form a meaningful opinion on a trucks that isn't in consumer hands yet — but it is interesting to see EV companies flirting with onboard solar, which conceivably be a flexible puzzle piece in the overall charging infrastructure.

EdisonFuture says the EF1-T's retractable solar panel can protect anything you're carrying in the 6.5-foot bed. The company calls it "Armadillo Armor," and the sloped shape and shingled look of the panels do sort of resemble an armadillo.

We just hope it's more durable than the Cybertruck's supposedly bulletproof glass that got smashed up the night Tesla first unveiled it.

Tesla doesn't currently offer the option of onboard solar panels, though at least one startup is trying to crowdfund an aftermarket modification for its vehicles that it's advertising with a flashy render.