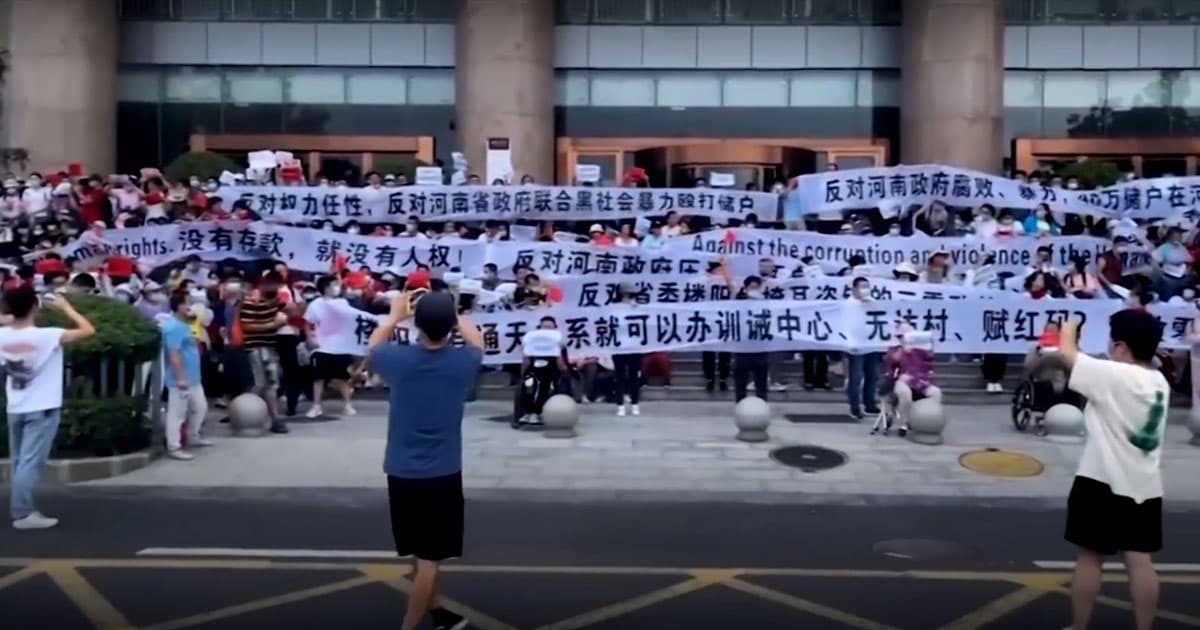 "We were cheated financially, beaten physically and traumatized mentally."

"We were cheated financially, beaten physically and traumatized mentally."

In a rare mass demonstration, roughly 1,000 protestors gathered at the People's Bank of China's Zhengzhou branch on Sunday, looking to reclaim government-frozen personal funds — only to face brutality at the hands of violent security forces, and leave without their money.

According to The New York Times, the Chinese government halted withdrawals from four regional banks in China's Henan province in order to investigate an extensive case of fraud connected to a criminal organization.

But this was back in April, and folks who trusted the banks have been struggling without access to their savings.

"We didn’t want to have conflicts with anyone," bank customer Feng Tianyu, a young mother pregnant with her second child, told the NYT. "But the government sent so many people to deal with the unarmed people. We were cheated financially, beaten physically and traumatized mentally."

The NYT previously reported that in recent weeks, some anguished bank-goers were intercepted en route by police, who allegedly misused COVID-tracing tech to track and apprehend prospective demonstrators — perhaps hoping to nip the protests in the bud.

But the situation is clearly desperate. China is notoriously unfriendly to civil unrest, and its ruling party may even be developing terrifyingly dystopian AI tech that detects government loyalty. Protests are few and far between.

Feng told the NYT that she was pulled by her hair and arms onto a bus, where some protestors faced further beatings. When she was finally taken to a hospital for stomach pain, the facility refused to treat her.

"I'm pregnant and have come this far because this money is really important to me," she continued. "If I don't get the money back, I can't have prenatal checks, I can't have this child, and I can't continue to support my 2-year-old daughter."

According to the BBC, the Henan government's financial arm has since issued a statement outlining a vague repayment plan, but the statement was quickly shredded on Weibo, the nation's most popular social network, by wary commenters.

"The statement gives no clear clue [of how they are planning to release our savings]," wrote one Weibo user. "They just don't want to return our money."