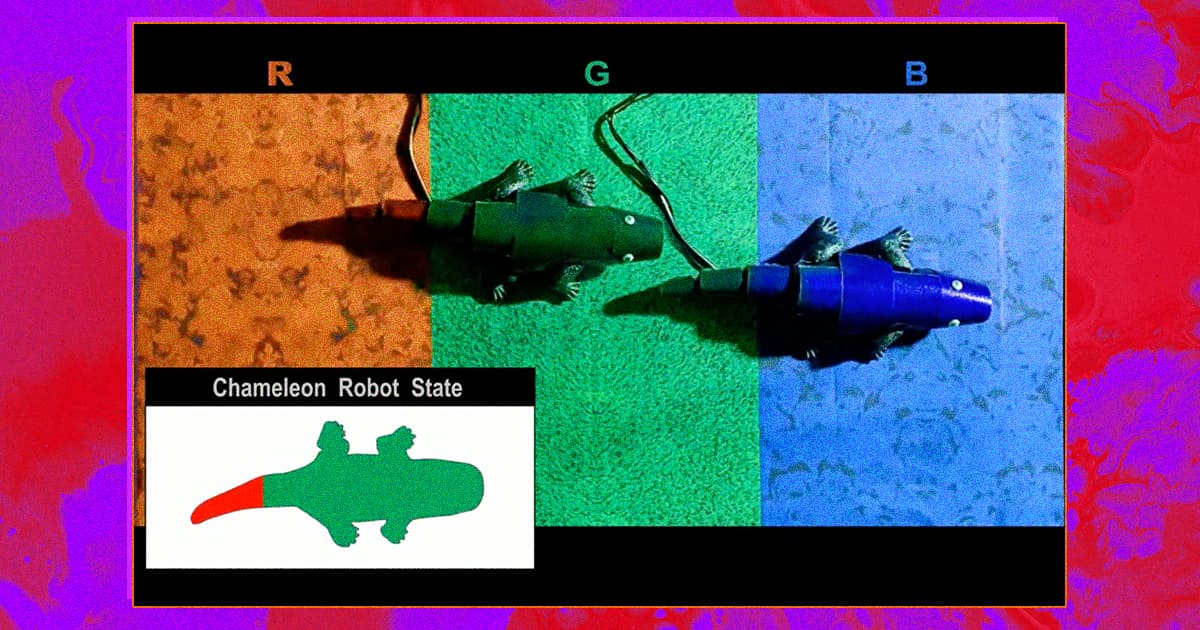 Scientists Create Chameleon Robot That Can Blend in With Its Surroundings

Watch it automatically change color as it wriggles across different surfaces.

Watch it automatically change color as it wriggles across different surfaces.

A team of Korean researchers seems to have cracked the code for rudimentary "cloaking," or active camouflage tech that can automatically blend into its surroundings in real-time.

The flexible, color-mimicking technology is durable and sensitive enough to help a soft robot blend into its surroundings, much like a real-world chameleon, according to research published in the journal Nature Communications on Tuesday. To prove that the system works, the researchers published a video of the chameleon-like bot, complete with cute googly eyes, that changes color from red to blue to green as it waddles across different monochrome surfaces.

It's a significant step forward for camouflage research, Inverse reports, even though the tech is still in preliminary, proof-of-concept stages today.

This isn't the first attempt to develop active camouflage by a long shot. But this experiment does take a different approach from other systems that often try to jam-pack as many colorful pixels as possible onto a surface — something that the researchers describe as "exceptionally challenging" from a technological standpoint in their paper.

Instead, the color-changing material — and the little chameleon-bot — is made of several stacked layers of color-changing displays, Inverse notes, which use nanotech sensors to detect and display the colors of the surroundings.

The camouflage is already being considered for military applications, which perhaps shouldn't come across as the biggest surprise given how long active camouflage has been a stable of militaristic science fiction media and a pipe dream for real-world military research.

But down the road, Ko envisions a world where we could buy color-changing clothing that "changes its color and patterns according to your taste or environment."