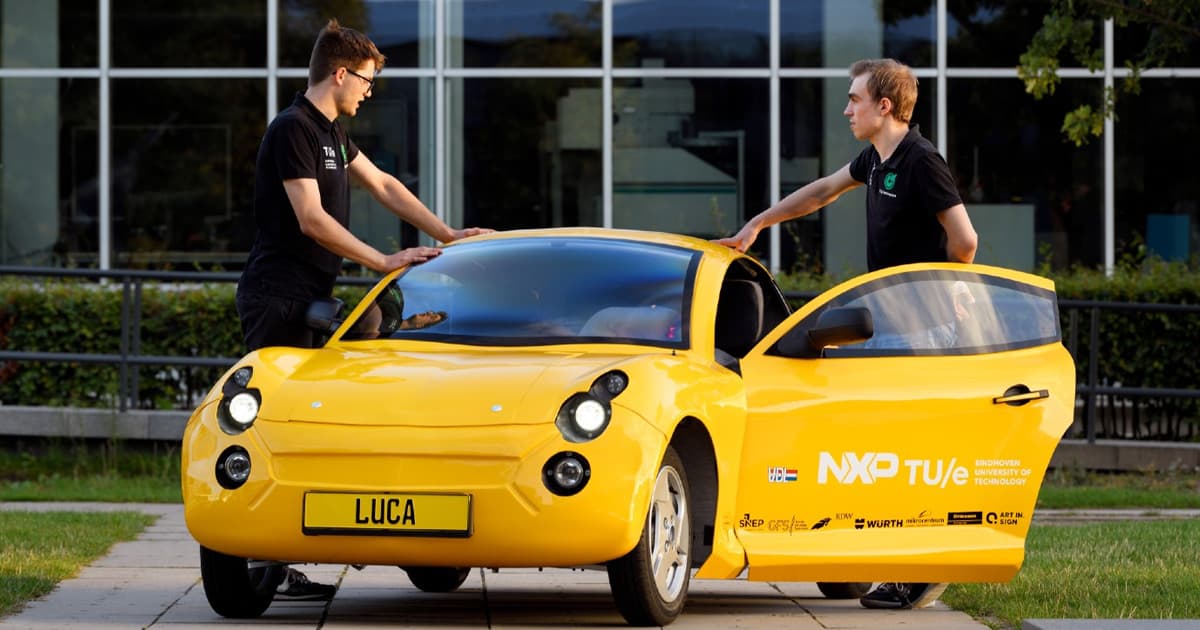 This Sporty Car Is Made Almost Entirely From Recycled Waste

"We want to show that waste is a valuable material, even in complex applications like a car."

"We want to show that waste is a valuable material, even in complex applications like a car."

The trend of replacing gas-guzzling, carbon-emitting cars with electric ones is really hitting its stride — but a Dutch team of students want to take it several steps further.

The team, from the Eindhoven University of Technology in the Netherlands, have created a car that's almost entirely made out of recycled waste.

"With this car, we want to show that waste is a valuable material, even in complex applications like a car," team member Matthijs van Wijk said in a statement.

The car, nicknamed "Luca," features an electric powertrain, with two electric motors allowing it to reach a top speed of 90 kmh (56 mph).

Since the tiny tw0-seater weighs just under 800 pounds without batteries — about half the weight of a comparable car — its range is a respectable 136 miles.

The chassis of the car is mostly made up of flax fibers mixed with plastic that was fished out of the ocean. The unusual mix of various plastics give the chassis a surprising amount of rigidity — especially when combined with natural fibers.

The body is made out of recycled hard plastic with a special film wrap — rather than relying on toxic paint — to give it its racecar-yellow color.

Even the interior got an environmentally friendly overhaul. The cushions of the two chairs are filled with coconut hair and horsehair. The fabric wrap of the seats themselves is made out recycled PET — but according to the team, it "feels and looks like suede."

More on recycling: This New Plastic Can Be Recycled Repeatedly

Adidas is Releasing Limited Edition Shoes Made from Plastic Ocean Waste
6. 9. 16
Read More
Captured CO2 Can be Directly Recycled into Methanol Fuel
1. 28. 16
Read More
Stem Ware
Scientists Discover World's Oldest Preserved Vertebrate Brain
Yesterday
Read More
+Social+Newsletter
TopicsAbout UsContact Us
Copyright ©, Camden Media Inc All Rights Reserved. See our User Agreement, Privacy Policy and Data Use Policy. The material on this site may not be reproduced, distributed, transmitted, cached or otherwise used, except with prior written permission of Futurism. Articles may contain affiliate links which enable us to share in the revenue of any purchases made.
Fonts by Typekit and Monotype.