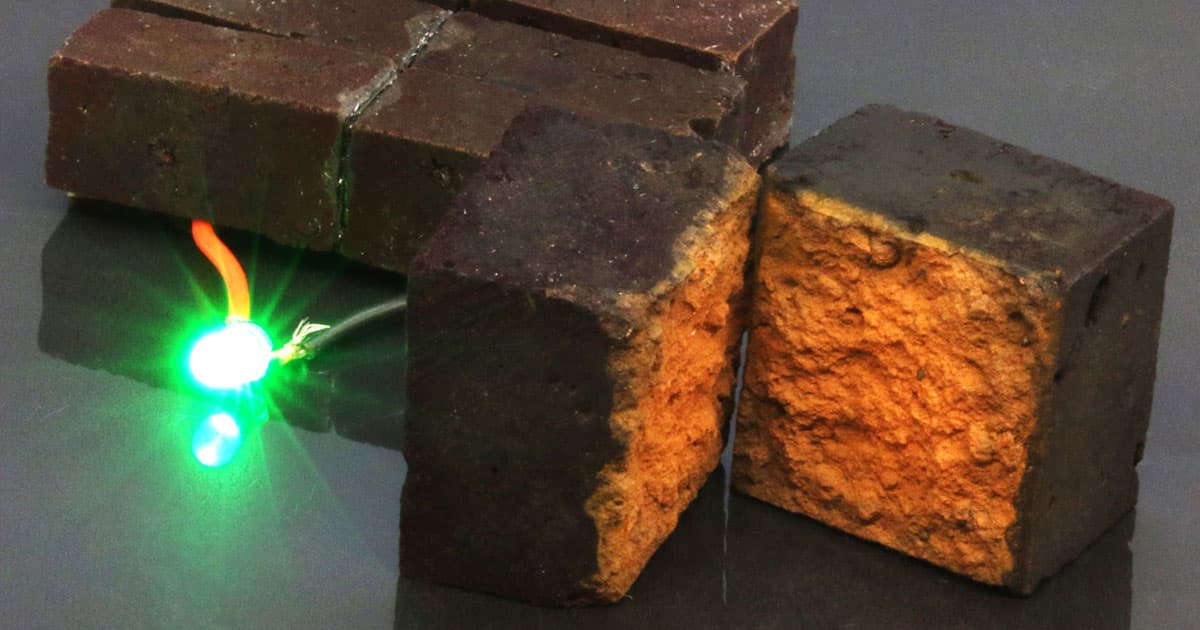 They Turned a Brick Into a Battery

Using nanotech, they made a literal power brick.

Using nanotech, they made a literal power brick.

From the Department of They Did Surgery on a Grape: A team of researchers at Washington University in St Louis have figured out a way to turn regular ol' bricks into batteries.

They did it by filling the pores of the brick with tiny conducting nanofibers of plastic that can store a charge. In early tests, the bricks were capable of powering a small LED light.

While the energy density is still incredibly low — that's mostly due to the fact that the bricks are supercapacitors, not chemical reaction-based batteries — the research could point towards a future where energy could be stored in the literal walls of a house.

“A solar cell on the roof of your house has to store electricity somewhere and typically we use batteries,” Julio D’Arcy, at Washington University, and co-author of the study published in the journal Nature Communications, told The Guardian. “What we have done is provide a new ‘food-for-thought’ option, but we’re not there yet.”

As of right now, compared to a lithium ion battery, the power brick only has one perfect the energy density. The researchers are hoping to increase this tenfold by using metal oxides.

If — and as of right now that's still a big if — the energy density ever became comparable to lithium ion batteries, “it would be a different world and you would not hear the words ‘lithium ion battery’ again,” as D'Arcy told the newspaper, as it'd be "way cheaper" technology.

To make their power bricks the construction material of the future, the researchers would also have to figure out a way to make them weatherproof and insulated.

4 Things to Know About the Gadget That Will Charge Devices in Seconds
3. 8. 18
Read More
This Carbon-Free Supercapacitor Could Revolutionize Electric Vehicles
10. 16. 16
Read More
Primate Theft
It Was a Very Bad Weekend for Monkeys Being Stolen From Zoos, Apparently
8:00 PM
Read More
+Social+Newsletter
TopicsAbout UsContact Us
Copyright ©, Camden Media Inc All Rights Reserved. See our User Agreement, Privacy Policy and Data Use Policy. The material on this site may not be reproduced, distributed, transmitted, cached or otherwise used, except with prior written permission of Futurism. Articles may contain affiliate links which enable us to share in the revenue of any purchases made.
Fonts by Typekit and Monotype.