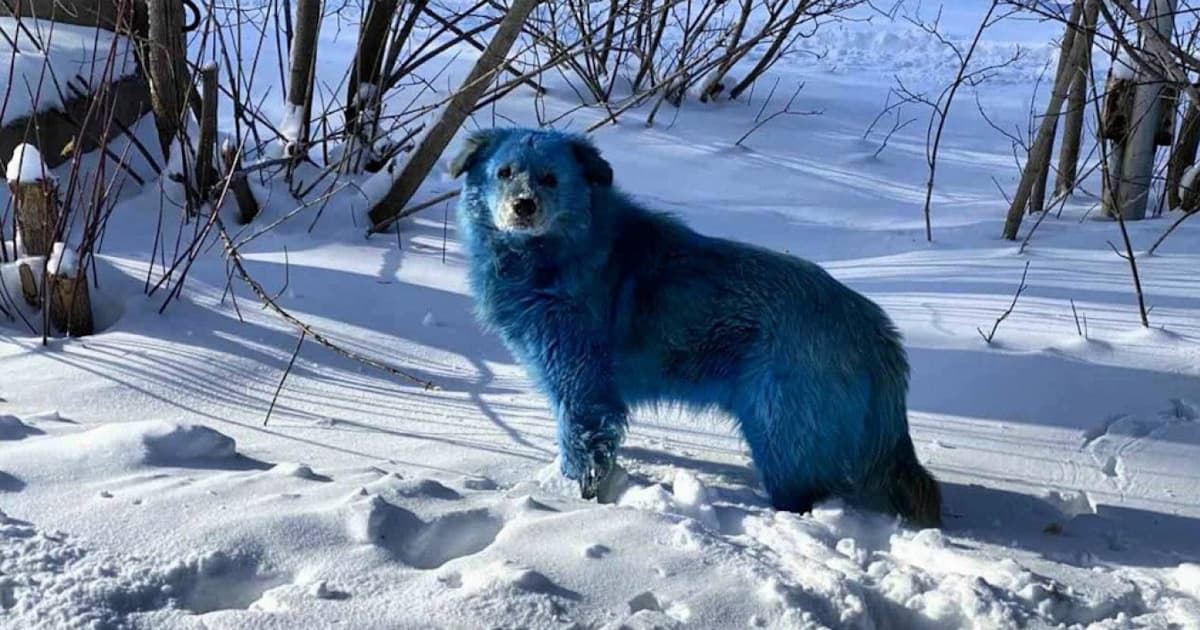 Stray dogs with bright blue fur have been spotted roaming the streets near an abandoned chemical plant in the Russian city of Dzerzhinsk, Newsweek reports, about 230 miles east of Moscow.

Animal activist groups suspect exposure to harmful chemicals may have resulted in the animals' furs taking on the blue hue, as state-owned news outlet RIA Novosti suggested in a Monday tweet.

They found some striking blue dogs in Russia, in the city of Dzerzhinsk an event occurred that puzzled more than one, they found a herd of dogs that aroused their astonishment, since they all had blue fur. pic.twitter.com/wu1GaAqUV9

According to The Moscow Times, the nearby factory produced plexiglass and hydrocyanic acid, which is hydrogen cyanide dissolved in water. Hydrogen cyanide is an extremely poisonous compound that is the precursor of several polymers.

The dogs' fur may have also been dyed by other chemicals including copper sulfate, a bright blue inorganic compound used in a number of industrial processes.

In other words, it's still unclear what the exact cause of the blue fur is — but it's bad news for the wellness of the poor dogs regardless.

"The dye on their fur implies they have had direct contact with or even ingestion of potentially toxic or harmful substances," Kelly O'Meara, Humane Society International's Vice President of companion animals, told Newsweek.

"This could result in painful skin burning or itching or internal bleeding and illness that could lead to death, without veterinary intervention," O'Meara added.

The factory went bankrupt in 2015, according to a RIA Novosti report from last week, allowing stray dogs to hang out there.

For now, city officials from Dzerzhinsk have taken the dogs to a veterinarian nearby to have them tested. Photos published by Reuters show the blue dogs being looked after at a shelter in Nizhny Novogrod, a city an hour away from Dzerzhinsk.

Fortunately, there's some good news as well: Two of the dogs have already found new owners.

More on Russia: Russia Complains That Assassins Are Getting Paid in Cryptocurrencies

Dialed Up
Spain Forcing Public Places to Set AC at or Above 81 Degrees Fahrenheit
8. 4. 22
Read More
Good Neighbors
German Government Says It May Keep Nuclear Plant Open After All
7. 31. 22
Read More
Weird Times
White House Brags That America Is Producing More Oil and Gas Than Ever
3. 7. 22
Read More
+Social+Newsletter
TopicsAbout UsContact Us
Copyright ©, Camden Media Inc All Rights Reserved. See our User Agreement, Privacy Policy and Data Use Policy. The material on this site may not be reproduced, distributed, transmitted, cached or otherwise used, except with prior written permission of Futurism. Articles may contain affiliate links which enable us to share in the revenue of any purchases made.
Fonts by Typekit and Monotype.