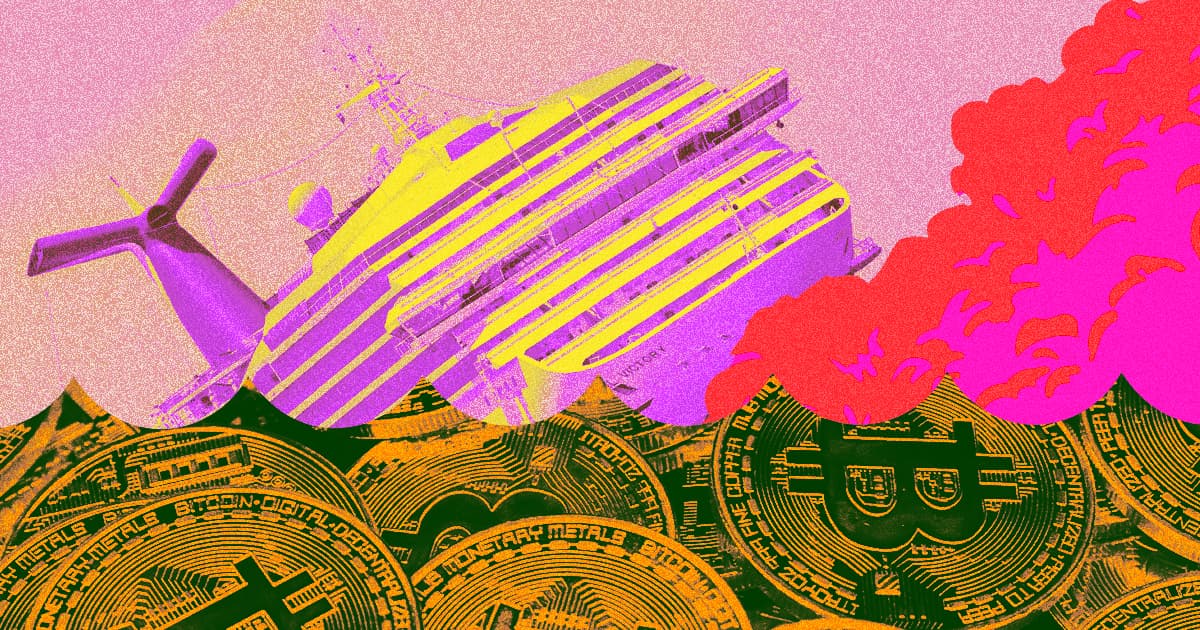 Drama raged in the high seas as a collective of libertarian crypto bros' proposed utopia — a seafaring community of ships and floating pods in the shape of the Bitcoin symbol — fell apart.

In The Guardian's investigation into the bizarre project, in which wealthy crypto enthusiasts bought a discounted cruise ship, named it the Satoshi in honor of Bitcoin's pseudonymous creator, and set sail to live a "seasteading" life where they could revolutionize the very concept of governance, it quickly becomes clear that the team bit off more than they could chew.

"We were like, 'This is just so hard,'" Grant Romundt, one of the co-owners of the Satoshi, told The Guardian.

The grand vision for the seasteading movement was an ever-shifting community of people living on boats or floating platforms who would be free to live and travel as they see fit on a highly-romanticized vision of the high seas. Even though the oceans are some of the most tightly-regulated spaces on the planet, the leaders of the seasteading movement saw the freedom of the oceans as a place to innovate on government. After all, as the movement's founders wrote in the book "Seasteading," they could "vote with their houses" by sailing away from any community they didn't like.

So for a movement seemingly designed in a lab to attract Bitcoin billionaires who want to escape financial regulations, the move to buy a 30-year-old cruise ship during a pandemic and rent tiny residential cabins with no kitchens seems almost laughable.

"I was thinking a week into the job, I can see I'm going to be resigning," the cruise ship's captain, Peter Harris, told The Guardian.

Needless to say, the Satoshi quickly flopped — the ship didn't even complete its maiden voyage before it became clear that the project would fail. Logistical challenges and expired certificates made it impossible to find insurance, something that Harris blamed on insurance companies being unwilling to wade into the murky waters of a cruise ship-turned-crypto hub.

The Satoshi, now the Ambiance, is under new ownership, and the seasteaders who spoke to The Guardian are seemingly undeterred.

More on crypto utopias: A Millionaire Is Building a Blockchain Utopia in the Nevada Desert

La La La
SBF's Dad Kept Sticking His Fingers in Ears During Court Hearing
12. 15. 22
Read More
Sword Art Online
Guy Who Invented the Word "Metaverse" Building His Own Metaverse
9. 19. 22
Read More
Rube Goldbergian
The Dune NFT Project Is Back With an Inscrutable New Scheme
3. 9. 22
Read More
+Social+Newsletter
TopicsAbout UsContact Us
Copyright ©, Camden Media Inc All Rights Reserved. See our User Agreement, Privacy Policy and Data Use Policy. The material on this site may not be reproduced, distributed, transmitted, cached or otherwise used, except with prior written permission of Futurism. Articles may contain affiliate links which enable us to share in the revenue of any purchases made.
Fonts by Typekit and Monotype.