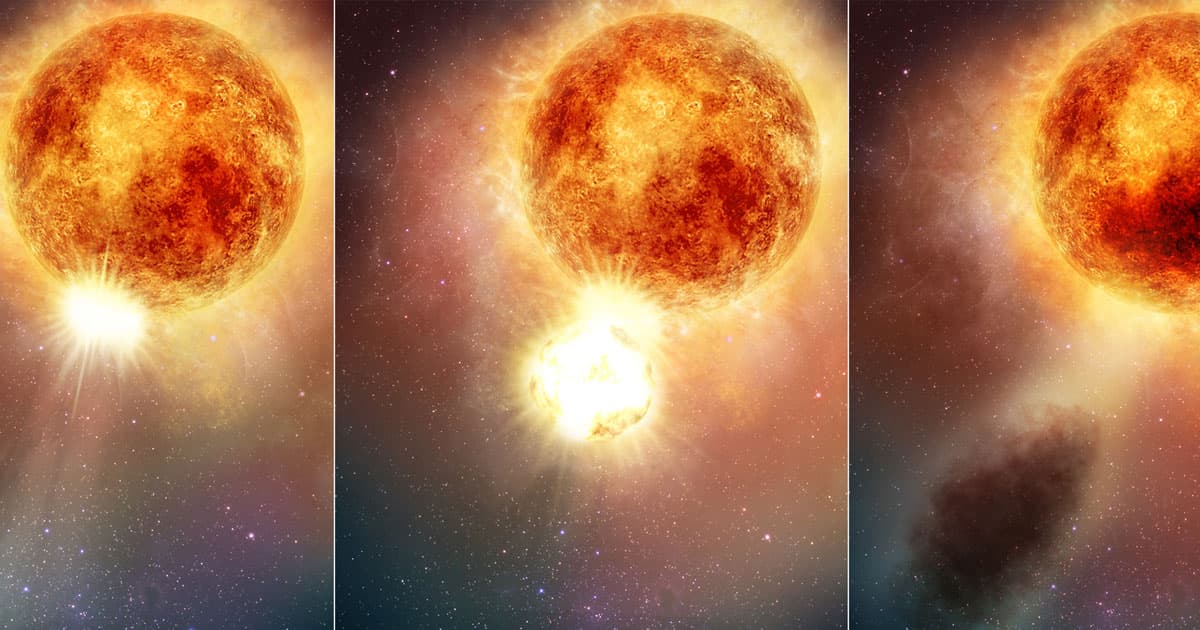 One of the Brightest Stars in the Sky Is Acting Bizarre, Scientists Say

"The interior is sort of bouncing."

"The interior is sort of bouncing."

Betelgeuse, the red supergiant star in the Orion constellation that's one of the brightest stars in the night sky, was rocked by a powerful explosion in late 2019.

The dramatic event, on such a prominent star, has puzzled astronomers ever since. At first, scientists suggested it might have erupted in a supernova. But according to 2020 data, the star survived the ordeal, despite dimming considerably in the years since.

Now, thanks to observations by NASA's Hubble Space Telescope, scientists may have a more satisfying answer. They suggest the star experienced an enormous surface mass ejection, not unlike our Sun's coronal mass ejections (CME) — except that it sent the red supergiant spinning and wobbling like an old washing machine.

"Betelgeuse continues doing some very unusual things right now; the interior is sort of bouncing," said Andrea Dupree at Harvard's Center for Astrophysics, author of a new paper submitted to The Astrophysics Journal, in a NASA statement.

The event was many orders of magnitude bigger than one of our Sun's coronal mass ejections, blasting off 400 billion times the mass than a typical one, according to NASA. In fact, it blew off the mass equivalent of several of the Earth's Moons.

So what caused the epic blowout? Dupree's team suggests that shockwaves from closer to the star's center blew off chunks of its photosphere, the lowest layer of its blazing stellar atmosphere, causing a dust cover that's now causing the star's surface to cool and crust over.

It's the first time we've witnessed a star having its surface being rocked by this powerful of an event, and it's still raising more answers than questions.

"We've never before seen a huge mass ejection of the surface of a star," Dupree said. "We are left with something going on that we don't completely understand."

More on Betelgeuse: Scientists Puzzled by Star That Exploded in Supernova But Somehow Survived

Betelgeuse Betelgeuse Betelgeuse
Astronomers: This Star Isn't As Giant As We Thought, Just Closer
10. 16. 20
Read More
Really Really Really Really Really Big
This Star Is So Huge that Saturn's Orbit Would Fit Inside It
6. 17. 20
Read More
Take Cover
Space Startup Blows Up Another Giant Inflatable Space Station Module
4:11 PM
Read More
+Social+Newsletter
TopicsAbout UsContact Us
Copyright ©, Camden Media Inc All Rights Reserved. See our User Agreement, Privacy Policy and Data Use Policy. The material on this site may not be reproduced, distributed, transmitted, cached or otherwise used, except with prior written permission of Futurism. Articles may contain affiliate links which enable us to share in the revenue of any purchases made.
Fonts by Typekit and Monotype.