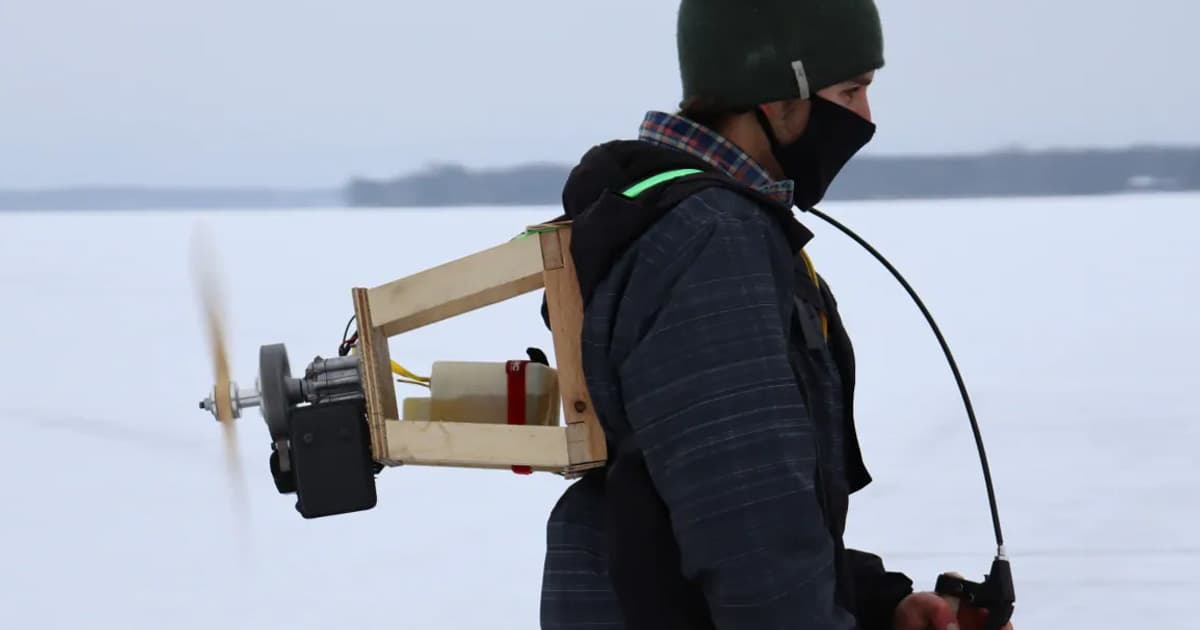 "I was actually getting a little scared at one point because I was going a little too fast."

"I was actually getting a little scared at one point because I was going a little too fast."

Canadian tinkerer Brydon Gibson, a 24-year-old Ottawa native, has built himself a "jetpack" that can allow him to ice skate at up to 25 mph, the CBC reports.

To be clear, the term "jetpack" is a bit of a misnomer — it pushes him along using an old-fashioned propeller, not a jet engine. But it still looks like a fun time.

"I got my hands on some weed whacker motors and I figured strapping one on my back and making skating a little bit lazier would [be] a good idea," Gibson told the broadcaster.

"I was actually getting a little scared at one point because I was going a little too fast," Gibson added, noting that the only braking method is a "finicky" kill switch.

In total, the "jetpack" weighs in at just over 13 pounds. Gibson was inspired by experience building remote-controlled airplanes and boats.

"It's kind of gotten me into some rough scenarios.… I've almost lost a finger in the past, but I've never had any serious injuries yet," he noted.

"Spare time with COVID, [and] not seeing anyone? I'm doing this instead," said Gibson.

The inventor has ambitions to upgrade the project.

"Bigger propeller, more thrust, more speed, more fun," he told the CBC. "This is what I do. This is my life."

Jetpacks are One Step Closer to Becoming Standard for U.S. Soldiers
6. 14. 16
Read More
Canada Appoints Kirsty Duncan as Country's First Minister of Science
11. 8. 15
Read More
Primate Theft
It Was a Very Bad Weekend for Monkeys Being Stolen From Zoos, Apparently
8:00 PM
Read More
+Social+Newsletter
TopicsAbout UsContact Us
Copyright ©, Camden Media Inc All Rights Reserved. See our User Agreement, Privacy Policy and Data Use Policy. The material on this site may not be reproduced, distributed, transmitted, cached or otherwise used, except with prior written permission of Futurism. Articles may contain affiliate links which enable us to share in the revenue of any purchases made.
Fonts by Typekit and Monotype.