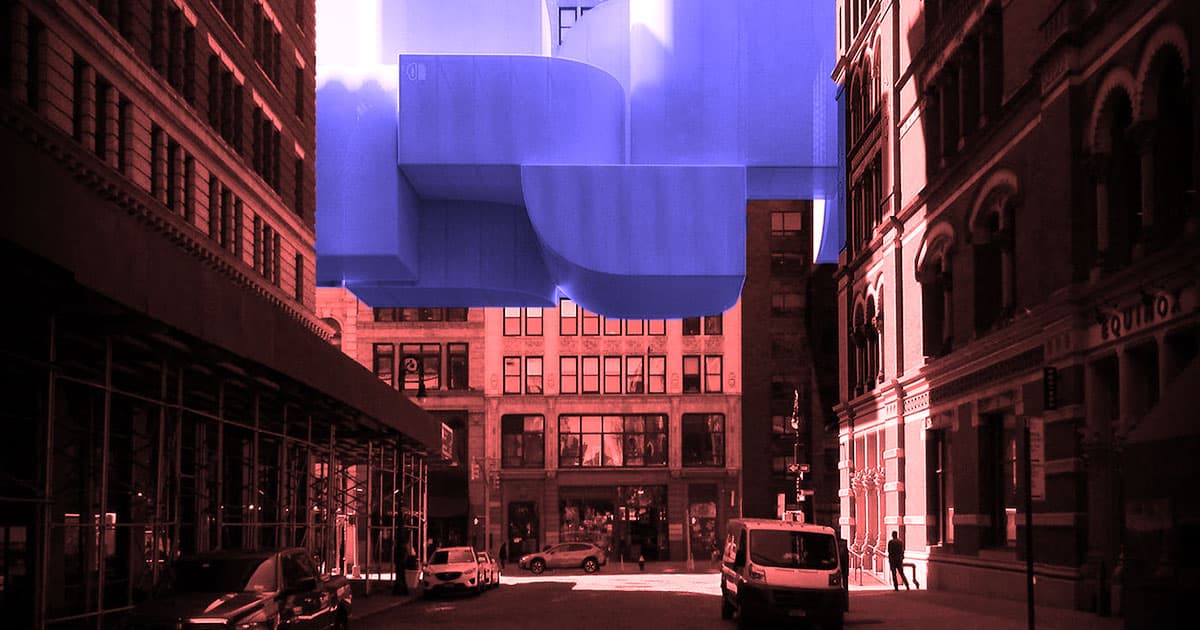 Have you ever been on a city street and looked up at the space above you and thought, "they should really do something with that?"

No, this isn't a 4/20 bait question. As Fast Company reports, Framlab eco-architect Andreas Tjeldflaat is proposing actual floating buildings that would use hover, zeppelin-like, in the empty space above municipal roadways and even fight climate change while they're at it.

The Oversky project is, as Tjeldflaat told FastCo, an attempt to build a "cloudscape" as a new sort of public square. The futuristic appeal doesn't end there, however — the firm is proposing "rigid frames of carbon fiber" that would, per its website, "create strong, light-weight enclosures for cells of helium lift-gas." That's in contrast to hydrogen, of course, which is hightly flammable and caused the horrific Hindenburg disaster back in 1937.

"The panels of the modules can certainly be employed on their own as part of more conventional building and infrastructure projects," he added.

Rendered visualizations of the floating enclosures make them look like something out of a high-concept minimalist game like the popular Escher-esque "Monument Valley," and Tjeldflaat admitted in his interview with FastCo that the design is still very theoretical.

Nevertheless, the science behind the proposal — which not only includes the carbon fiber cells of helium but also what the architect calls "nanophotonic engineering," a technology which would, per Tjeldflaat's telling, cool the floating modules using "a foam-like material structure with nanoscale air pockets" that both radiate heat back out into the atmosphere and cool the space below it in much the same way that trees do naturally.

Given that fossil fuels are greatly exacerbating climate change, and are the main fuel powering air conditioning, this kind of tech could be revolutionary.

It may seem like a floating pipe dream, but with such fascinating scientific concepts behind this beautiful proposal, it could be worthwhile to investigate — or at least dream about.

READ MORE: This architect wants to suspend buildings in midair. It’s not as impossible as it sounds [Fast Company]

More on the architecture of the future: They Just Finished the World's Thinnest Skyscraper and It's Slightly Terrifying

Three Reasons Why It's a Good Idea to Build a Skyscraper Out of Wood
2. 23. 18
Read More
White Forest Tower in Paris Will Fight Climate Change With 2,000 Plants
10. 26. 17
Read More
Scientists Have Created a Concrete Roof That Generates Solar Power
10. 19. 17
Read More
+Social+Newsletter
TopicsAbout UsContact Us
Copyright ©, Camden Media Inc All Rights Reserved. See our User Agreement, Privacy Policy and Data Use Policy. The material on this site may not be reproduced, distributed, transmitted, cached or otherwise used, except with prior written permission of Futurism. Fonts by Typekit and Monotype.