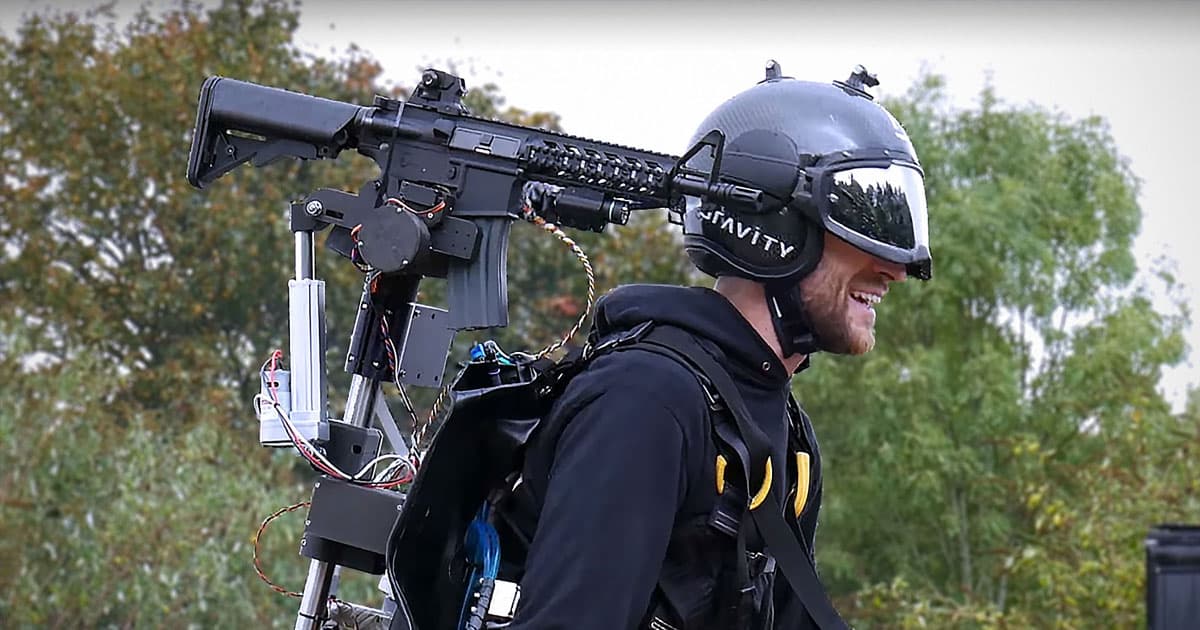 The mock rifle aims wherever the pilot looks.

The mock rifle aims wherever the pilot looks.

Gravity Industries' Iron Man-style flying jet suit just got a new upgrade: a shoulder-mounted pellet rifle that fires much like an assault weapon.

On Monday, engineer James Bruton uploaded a video detailing his creation of a turret for the jet suit at the request of Gravity. The video goes on to show the company's founder, Richard Browning, donning the suit to hover above a parking lot while firing the mounted fully automatic Airsoft rifle.

This isn't the first time the makers of a personal flying device have not-so-subtly hinted at an interest in warfare. In July, French inventor Franky Zapata used his flying hoverboard, the Flyboard Air, to soar above Paris' Bastille Day parade with a toy rifle in hand.

Bruton's design, however, takes the concept one step further by mounting the rifle on a turret that responds to the movements of the pilot's helmet, much like Tony Stark's fictional Iron Man suit — when Browning looks down, for example, the rifle points down.

A initial design that allowed the rifle to also pivot from left to right was scrapped because — get this — it would cause the rifle to smack into the pilot's head.

Whether any militaries take the bait and hire one of these companies to help them create militarized suits remains to be seen.

But U.K. Defence Secretary Gavin Williamson did seem pretty stoked about the potential military uses of Gravity's jet suit even before the company added a rifle to it, asking Browning after an April demonstration if he could "imagine doing an assault on to a ship."

READ MORE: The Creators of That Flying Iron Man Suit Are Subtly Hinting It's Great For War [Gizmodo]

Netflix and Drive
Mercedes Claims to Have Achieved Level 3 Automation, Beating Tesla
Yesterday
Read More
Absent CEO
Tesla Investors Furious at Elon Musk for Vanishing During Crisis to Play With Shiny New Twitter
12. 13. 22
Read More
Stay Away
Tesla Is Having Extreme Trouble Hiring, for Some Reason
12. 6. 22
Read More
+Social+Newsletter
TopicsAbout UsContact Us
Copyright ©, Camden Media Inc All Rights Reserved. See our User Agreement, Privacy Policy and Data Use Policy. The material on this site may not be reproduced, distributed, transmitted, cached or otherwise used, except with prior written permission of Futurism. Articles may contain affiliate links which enable us to share in the revenue of any purchases made.
Fonts by Typekit and Monotype.