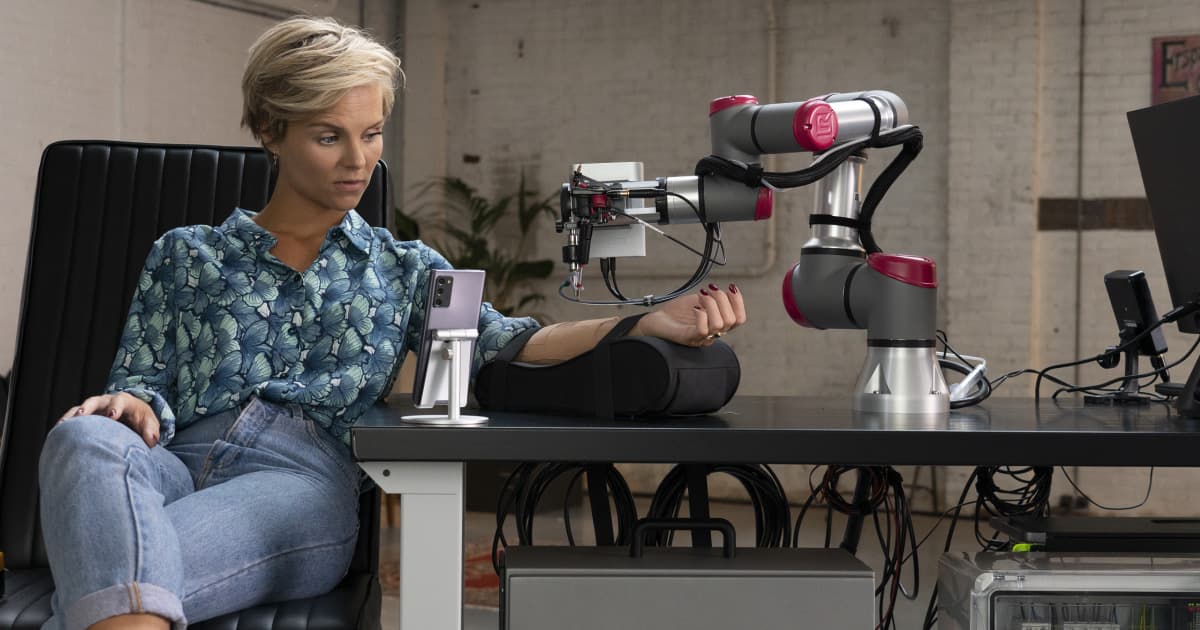 Artist Uses 5G Robot to Tattoo Somebody In A Different Location

As part of a marketing stunt for telecom T-Mobile Netherlands, Dutch TV personality Stijn Fransen got a tattoo by a tattoo artist — but remotely, through the use of a 5G-enabled robot.

Tattoo artist Wes Thomas tattooed Fransen remotely through the use of a cleverly engineered robotic arm that used machine learning to learn the placement of Fransen’s arm and map the placement onto Fransen’s body.

The robot was built and programmed by London-based technologist Noel Drew over several weeks. “Every part of the build was considered and either purchased specifically or designed, developed, and fabricated in house from the ground up,” Drew told PCMag.

It was quite the undertaking. “Multiple tracks of development across software and hardware, constant iteration of designs and prototyping, a bank of 3D printers working nearly 24/7 churning out parts,” Drew recalled.

“Many butternut squash were harmed in the test cycle before it was refined and ready for reality,” Drew said, implying that he had tested the hardware on vegetables before trying it out on Fransen.

Fransen took the entire process in stride. “She was so unbelievably calm about the whole thing,” Drew told PCMag. Luckily, there were fail-safes “all over this project,” according to the technologist. A potentiometer monitored the surface of Fransen’s arm, for instance, to make sure the needle didn’t go too far in.

Fortunately, nobody was harmed during the experience. While T-Mobile clearly intended the stunt to sell 5G coverage, the feat is a testament to the power of robotics and machine learning as well.

READ MORE: Are You Brave Enough to Get a Tattoo From a Robot? [PCMag]