The name tells you all you need to know: Terraforming Mars. 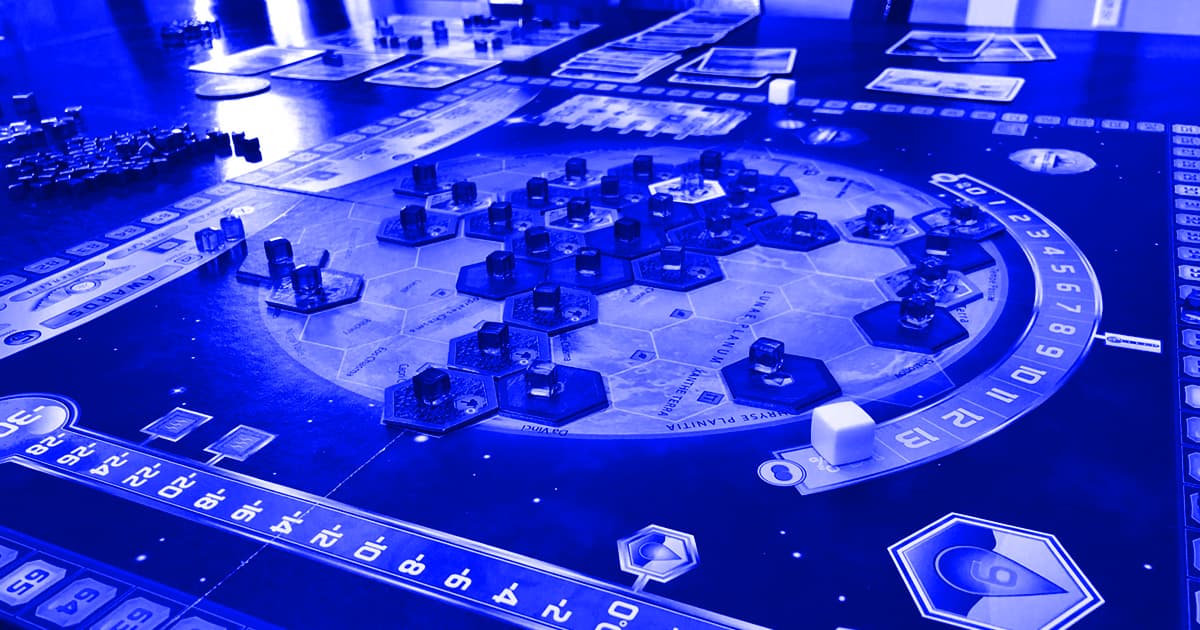 If you've ever spent more than three minutes on Facebook, chances are you saw at least one thing that made you want to flee to another part of the solar system. And as you probably know, Mars is the closest option. Unfortunately, before we can start moving to Mars en masse, we’re gonna have to do some work on the Martian atmosphere to create an environment that’s livable for human beings. The process of transforming another planet into something more earth like has long been known to science-fiction readers as “terraforming.” And now it’s the subject of Indie Boards and Cards' addictive science fiction game, Terraforming Mars.

Terraforming Mars - The Board Game

Set in the 2400s, Terraforming Mars allows players to control a massive corporation that's attempting to raise the temperature of Mars’ atmosphere while increasing oxygen and water levels in order to bring it more in line with Earth. Thanks to incentives from Earth’s unified World Government, as well as the obvious profit motive, there are multiple other corporations that are also attempting to transform the Red Planet. And as the game’s product description explains, it will require cooperation in order to get the job done:

“In Terraforming Mars you play one of those corporations and work together in the Terraforming process, but compete in doing the best work, with victory points awarded not only for your contribution to the Terraforming, but also for advancing human infrastructure throughout the solar systems and other commendable achievements.”

Players will get “project cards,” each one unique, representing its own part of the larger Terraforming Mars initiative, such as introducing certain plant or animal species to the environment, constructing new Martian cities, or “establishing greenhouse gas industries to heat up the atmosphere.”

Despite cooperating to make Mars a decent home for human colonizers, there’s a competitive element, too, as corporations are competing for the best locations for city, ocean, and greenery tiles. As the terraforming process continues, more and more people (and money) make their way to Mars. And at the end of the process, whichever player has the most victory points is declared the Terraforming Mars victor.

As you can probably gather, Terraforming Mars is a pretty involved game, with a lot of different moving parts. It’s recommended for players aged 10 and up and comes with more than 230 cards, 80 tiles (representing various components of the game), and an extensive rule book. And the game board itself is a scientifically accurate map of the planet’s Tharsis region, purportedly home to “3 of the 4 great volcanoes, and the Viking site where the first man-made lander touched down.”

If Terraforming Mars sounds like a good way to spend a Friday night, you can head over to Amazon and order your copy right now. As a very wise man once said, "get your *ss to Mars!"

Read This Next
FROM THE DEPT. OF THINGS TO BUY
5 Nintendo Space Games That Are Out of This World
From Our Partners
Save An Extra 20% On the One Million Dollar Puzzle This Cyber Week
From Our Partners
Pick Up These Award-Winning Game Titles for Less This Black Friday
Brands We Love
This Captivating Board Game Lets You Build a Planet From Scratch
Brands We Love
This Fun Interactive Game Teaches Kids Coding Skills Without Computers or Tablets
More on Sci-Fi Visions
What is Happening
Wednesday on the byte
Elon Musk Sets His Twitter Account to Private
From the Dept. of...
Monday on futurism
The Best Humidifiers of 2023
Human v. Giraffe
Jan 24 on the byte
Chaotic Italian Fashion Line Baffles Facial Recognition Software
READ MORE STORIES ABOUT / Sci-Fi Visions
Keep up.
Subscribe to our daily newsletter to keep in touch with the subjects shaping our future.
+Social+Newsletter
TopicsAbout UsContact Us
Copyright ©, Camden Media Inc All Rights Reserved. See our User Agreement, Privacy Policy and Data Use Policy. The material on this site may not be reproduced, distributed, transmitted, cached or otherwise used, except with prior written permission of Futurism. Articles may contain affiliate links which enable us to share in the revenue of any purchases made.
Fonts by Typekit and Monotype.