This little kit packs 60 STEM projects into one small box. 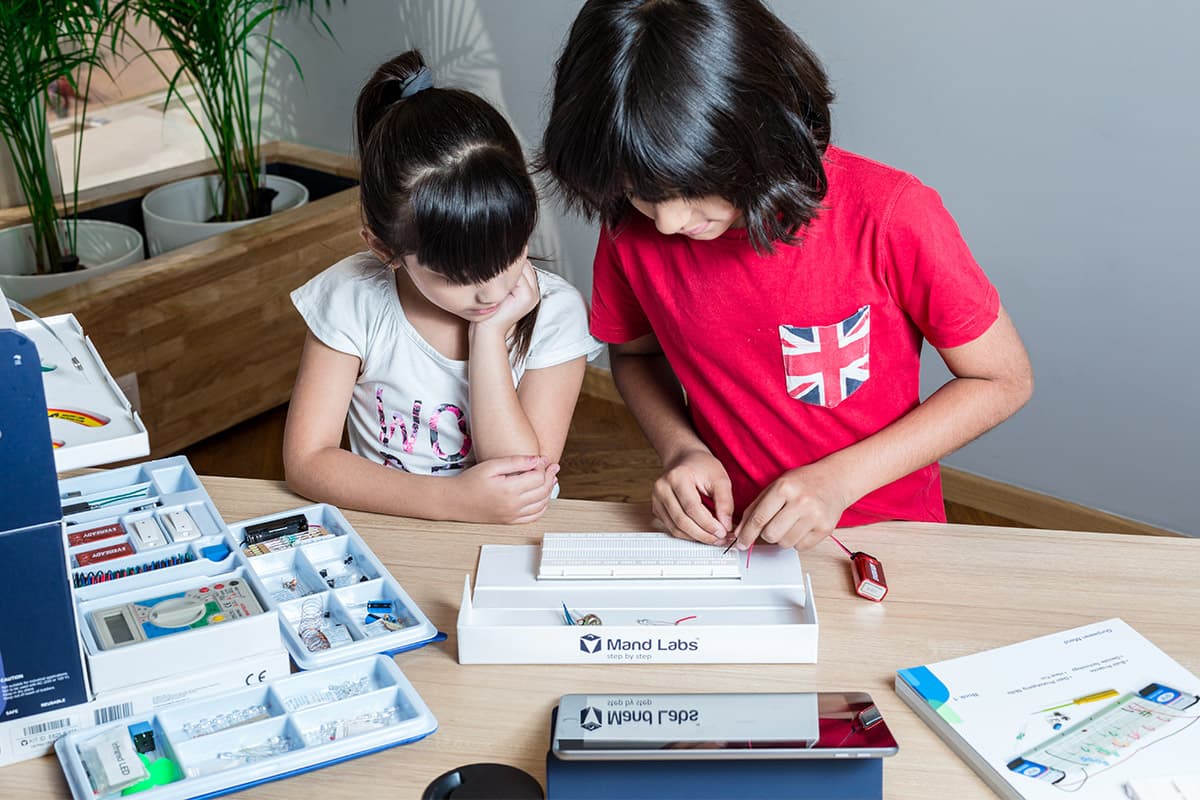 In the eighteenth century, if you wanted to learn any scientific discipline, you started with a kit. Students would visit specific shops that put together preassembled kits for everything from astronomy to geology that their teachers would walk them through, piece-by-piece and step-by-step. Since these humble beginnings, the science kit has become one of the beloved toys that launched a thousand young minds on a journey of exploration and understanding.

The Mand Labs Electronic Series DIY Kit, just $145, can help launch that sense of wonder, by packing everything from simple designs to complex circuits into one handy box families can enjoy together.

Active learning, that is, learning about STEM by actually doing it, is one of the fundamental principles of the KIT-1. Research has shown that jumping into a field and "getting your hands dirty," is an effective way to understand the concepts and approaches that you use on a daily basis. Just like there's only so much you can learn about music before you have to pick up an instrument or a microphone, there's been a strong push in recent years to make STEM more accessible, and that's made science kits more popular than ever.

Mand Labs also pairs each experiment with videos and readings that discuss the theory behind each experiment and how it works. In fact, there's an entire curriculum tied to the kit that you can follow, each lesson building on the others. Total beginners and experienced hobbyists alike will find something to learn from going through each experiment.

The KIT-1 is designed to put everything you need to begin exploring circuits and physics. Among the topics explored are:

Among the projects you'll build are burglar alarms, touch-activated switches, "staircase" lighting, and H-bridge circuits, which allow DC motors to run forwards and backward and are a key part of many robotics systems.

It includes all the needed tools and parts for each project, and yes, even batteries are included. Everything is carefully organized in trays you can seal to keep parts where they belong as well, and the box itself folds out into an orderly tool kit where screwdriver, pliers, and the breadboard (with its handy carrying case) are all easy to reach and use.

The videos and readings are designed to limit frustration while illustrating the project, so you can prop up a tablet or a laptop and watch them at any time. Kids can learn and explore at their own pace, picking the projects they're interested in. Concepts are introduced one at a time, so as they progress through, they'll become more comfortable and familiar with components.

It's easy to forget that our access to these components and the ability to build our own electronics is fading. For years, there was a parts and electronics provider in every mall and shopping center, but as the market has shifted online and home electronics have become harder to repair yourself, those providers have gone online or just disappeared altogether.

Science kits not only help kids understand the principles that drive their game consoles and tablets but also give them a strong grounding in the technologies we rely on every day. For $145, the KIT-1 offers that connection and helps kids see what a future in STEM looks like.

Read This Next
From Our Partners
Check Out These 20 Cyber Monday eLearning Deals That Will Help Advance Your Career
From Our Partners
This Black Friday, Score an Additional 70% off your Choice of eLearning Bundles
From Our Partners
Pre-Black Friday Doorbusters: This Ruler Can Measure Anything
From Our Partners
Save on Science Toys And DIY Kits During This Pre-Black Friday Sale
From Our Partners
Build A Cyberpunk Arsenal With These Robot Kits
More on Sci-Fi Visions
Human v. Giraffe
Tuesday on the byte
Chaotic Italian Fashion Line Baffles Facial Recognition Software
Step One
Tuesday on the byte
World’s Third Richest Person Says He’s Developed "Addiction" to ChatGPT
FROM THE DEPT. OF...
Tuesday on futurism
The Best Places to Buy A Laptop in 2023
READ MORE STORIES ABOUT / Sci-Fi Visions
Keep up.
Subscribe to our daily newsletter to keep in touch with the subjects shaping our future.
+Social+Newsletter
TopicsAbout UsContact Us
Copyright ©, Camden Media Inc All Rights Reserved. See our User Agreement, Privacy Policy and Data Use Policy. The material on this site may not be reproduced, distributed, transmitted, cached or otherwise used, except with prior written permission of Futurism. Articles may contain affiliate links which enable us to share in the revenue of any purchases made.
Fonts by Typekit and Monotype.