Cities need to reimagine their future to combat a warming planet and rapid urbanization. 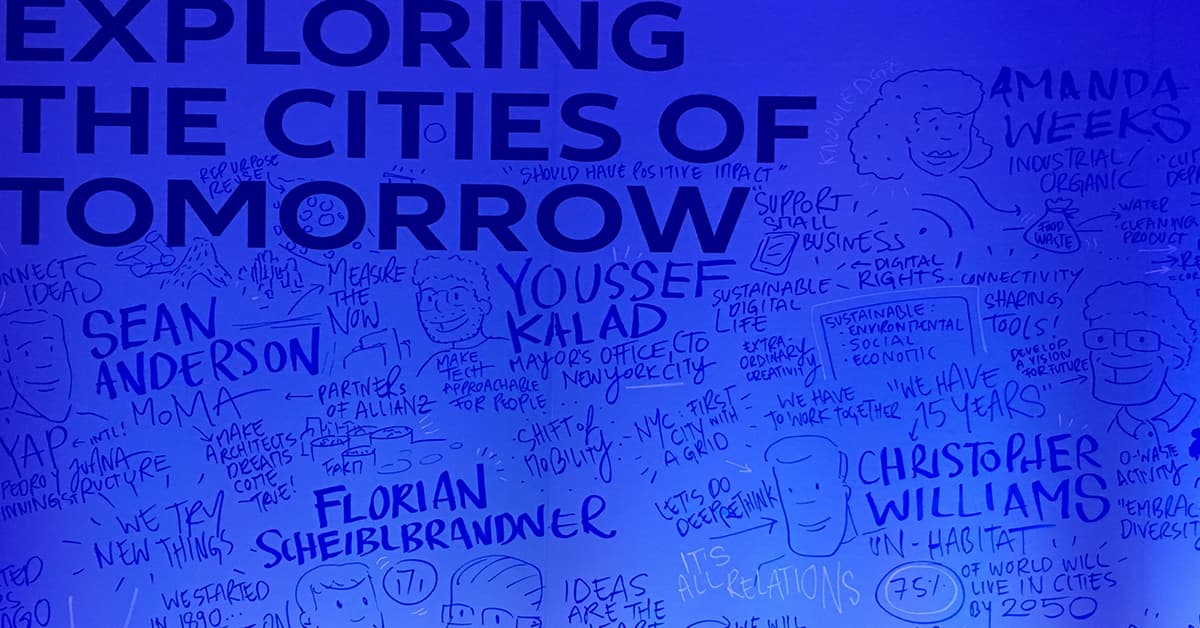 Last Thursday was a rainy night in New York City, but that didn’t stop a crowd of curious and innovative thinkers from packing into MoMA’s PS1 for a night of lively conversation on the topic no city dweller can afford to ignore – sustainable urban living.

That urgency can feel overwhelming, as many of the speakers pointed out. Head of UN Habitat Christopher Williams shared some sobering statistics with the standing room-only crowd. By 2050, he noted, 75% of the world will live in cities, a rate which means that some cities will literally double in size in just a few decades.

Is that it, then? Are we doomed? That was the question on the minds of both speakers and audience members at the Allianz Explorer Series. And while most agreed that some of the doomsday wheels have already been set in motion, the room was electric with the energy of the innovators who believe in the tremendous opportunities available by reimagining the future.

One of the industries best poised for a sustainable reimagining is building. Architect and sustainable building expert Eric Corey Freed encouraged the audience to rethink construction. By turning to emerging fields like synthetic biology to design buildings that grow, evolve, and nourish its inhabitants, we could live and work in indoor spaces that feel as healthy as outdoor ones. He posited the idea in the perfect place – as curator Sean Anderson shared with the crowd, MoMA’s PS1 has already been home to futuristic exhibitions like an elevated vegetable farm made from repurposed materials that provided local schools with fresh produce.

The timing is also right for enterprising thinkers to launch businesses that can power the burgeoning green economy. Co-founder and CEO of Industrial/Organic Amanda Weeks showcased her company, a network of urban biorefineries that derive organic chemicals and ingredients from food waste. Bahij Chancey was also on hand to talk about Green City Force, an Americorps program that trains New York City Housing residents for careers in the green economy. The program is successful not just because it brings sustainability measures to the 500,000 New York residents that rely on public housing, but because it introduces young people who may not have otherwise had the opportunity to a career path in green fields with great pay and solid growth.

Weeks also stressed the importance of holding corporations and governments responsible for the large-scale change needed to mitigate the climate crisis and promote sustainability. That’s where sponsor Allianz comes in: the global insurer has committed to promoting a carbon-free economy, and making sure that by 2050 their buildings produce zero carbon emissions. Youssef Kalad from the New York City Mayor’s Office also spoke about the large-scale efforts that the Big Apple is working on to promote urban sustainability, including carbon neutrality, rethinking transportation, and leading the charge in making a sustainable digital life possible for all New Yorkers.

Overall, the event highlighted the collaborations that are taking place like never before, said the UN’s Christopher Williams, noting that commitments to sustainability and the growing of a green economy require cooperation between everyone from start-up founders to political leaders to private investors. Those kinds of collaborations may not be able to fix the mistakes of the past, but they can lead to widespread opportunity and a sustainable future.

Make sure to keep an eye out for the next Allianz Explorer Series taking place in Munich, Germany on August 27th. They will be exploring with the next generation to learn about how they see the future -- the challenges, hopes, and visions for a sustainable future.

Read This Next
Brands We Love
A Green Future is Possible for NYC Thanks to One Innovative Organization
Brands We Love
Allianz Explorer Series Is Taking NYC on a First-Class Ride to a Sustainable Future
Futurism
Empowering Citizens: Experts Predict the Future of Our Urban Cities [Sponsored]
Futurism
Today, Michio Kaku Described What Life Will Look Like in Twenty Years
Futurism
Tree Skyscrapers and Underwater Restaurants: See the Most Futuristic Designs of the Year
More on Future Society
Finders Keepers
Yesterday on the byte
China Wants the Corpse of Its Balloon Back After the US Killed It With a Missile
Rough
Monday on futurism
Elon Musk's Twitter Is Reportedly Failing Miserably to Contain Horrific Child Abuse Content
YouTube Propaganda
Monday on the byte
Experts Say There's Something Very Weird About North Korean YouTubers
READ MORE STORIES ABOUT / Future Society
Keep up.
Subscribe to our daily newsletter to keep in touch with the subjects shaping our future.
+Social+Newsletter
TopicsAbout UsContact Us
Copyright ©, Camden Media Inc All Rights Reserved. See our User Agreement, Privacy Policy and Data Use Policy. The material on this site may not be reproduced, distributed, transmitted, cached or otherwise used, except with prior written permission of Futurism. Articles may contain affiliate links which enable us to share in the revenue of any purchases made.
Fonts by Typekit and Monotype.